A new report on the impact of a music making programme has highlighted positive changes in the “creativity, emotional literacy, motivation and self-efficacy” of young people, the scheme’s manager says. 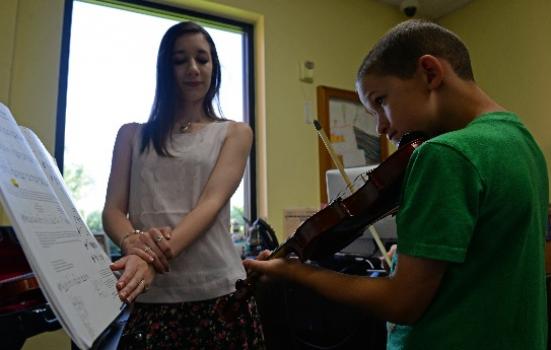 A music programme working with a large proportion of deprived children and young people has increased their confidence, resilience and teamwork, an evaluation of the scheme has concluded.

ArtsTrain works with young people aged 5 to 23 in the London boroughs of Bromley, Bexley and Lewisham, the average age being 15. Nearly half were recipients of Free School Meals, 44% had a disability, and 22% had Autistic Spectrum Disorder (ASD) during the survey period.

Participants gained an increased ability to work together in a team, a greater propensity to persevere and complete tasks, and more confidence around trying out new things, the evaluation report says. Nine out of 10 participants surveyed said they planned to continue their music learning over the following six months.

ArtsTrain Programme Manager Keith Sykes said that the report had been commissioned in order to “better understand the impact that our music-making activity has had on young people’s wellbeing”.

He added: “The research demonstrated that following participation in our programme, young people reported an increase in their creativity, emotional literacy, motivation, and self-efficacy.

“These findings have enabled us to better understand the impact of our work and in turn evidence this impact with our partners and funders.”

The year-long evaluation by BOP Consulting of 371 young people involved in 24 ArtsTrain creative music projects found that, as well as learning specific music skills, the programme had a broader, more far-reaching impact on participants.

The report’s key findings include:

Abigail, 16, said that being involved in the ArtsTrain London Jazz Festival
Collective had developed her communication and creative skills: “I’ve learnt not to be scared to share ideas, how to communicate with others and share opinions. All useful skills to have not just for music but in general.”

Troy, 18, worked on his songwriting and production as part of the ArtsTrain Academy. “This project laid the foundation,” he said. “It gave me more confidence in my abilities whilst having a supportive space to develop my crafts [and] inspired me to pursue my passions in music, poetry and entertainment.”

The report comes at a time of continued decline in music education in schools in England, with the number of students sitting Music GCSE dropping by 2.2% in one year, according to the most recent figures published by the Joint Council for Qualifications (JCQ). Deborah Annetts, Chief Executive of the Incorporated Society of Musicians (ISM), recently stated that the number of schoolchildren sitting GCSE Music has dropped by 18.6% since 2016.

Sykes said that the current decline in mainstream music education made the report’s findings all the more important.

“For all of us working with schools, we have seen first hand the cuts to the provision of creative subjects, including the cutting back on lesson time, staffing and in some cases facilities.

“Having this independent research that evidences positive impact on young people’s personal, social and emotional development has allowed us to secure new commissions from statutory services, schools and colleges.”