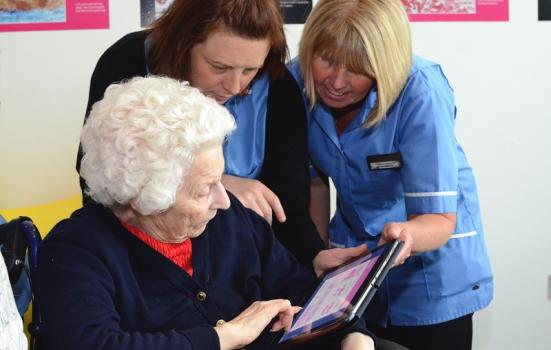 A museum-led pilot programme that used drama to train carers for people living with dementia has been successful and could soon be rolled out across the UK.

NML piloted the ‘Tier 2’ dementia care training within professional health and social care settings in the North West of England between November 2015 and April 2016, becoming the first organisation to do so according to Health Education England.

The project, commissioned by Health Education England, was built on the success of the museum’s ‘House of Memories’ programme, which has trained 10,000 family and professional carers in person-centred dementia care since 2012.

It also calculated the social return on investment for the pilot project to be £1 to £19.06, based on the impact of training on dementia awareness, standards of care, and personal and professional development of the health and social care sector.

Carol Rogers, Executive Director, Education and Visitors at NML, said: “Our aim is to cascade the House of Memories Tier 2 across the UK to ensure that National Museums Liverpool continues to deliver innovative and museum-led training and resources for health and social care professionals.”

The training programme involved workshops that used documentary-style films and facilitated discussions to guide participants through a number of dementia-care issues. Participants were also given access to the My House of Memories app, a digital resource designed to encourage meaningful engagement and personal connections with people living with dementia.

NML Communications Manager Lucy Cattell explained: “We see museums as experts in looking after memories, so we have used our own sector knowledge to develop the House of Memories training and resources to help to support people living with dementia and their carers.

“Our approach has given health and social care professionals a unique perspective on how to engage, support and communicate with people living with dementia, which is why Train the Trainer has proved to be so valuable in terms of the insight it provides.”

The pilot project comes at a time when other arts organisations are starting to think seriously about accessibility and dementia. West Yorkshire Playhouse recently released a best-practice guide to putting on dementia-friendly performances, and Scottish Opera are scheduled to stage the UK’s first dementia-friendly opera performance in November.

Macaila Finch, Programme Manager for Education Commissioning at Health Education England, praised the project: “It might be considered an unusual step to bring in a museum service to provide training on a health matter to those already working in medical-orientated backgrounds.

“However, the success of this pilot has demonstrated that the House of Memories training is universal and has been extremely effective in allowing those attending the programme to look at dementia from a different angle, and adapt their approach to supporting people living with dementia going forwards.”

The Train the Trainer model for ‘Tier 2’ training, which is defined by the Department of Health as the core knowledge, skills and attitudes needed for people who have regular contact with people living with dementia, will be available for roll out across the UK in 2017/18.

Correction 06/09/2016: A previous version of this article suggested the 'Train the Trainer' programme worked with both professional and family carers. This has been corrected.