Museum visitor numbers drop for the first time in a decade

Although visits by UK nationals have held steady, visitor numbers from overseas have fallen despite an overall increase in tourism. 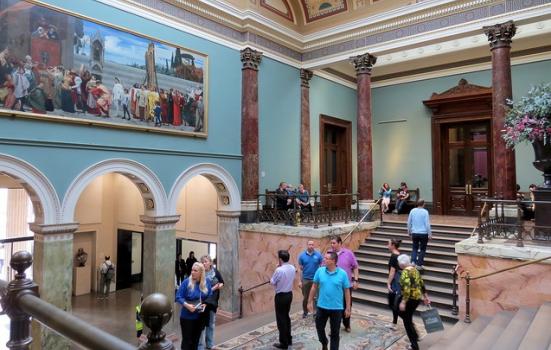 The number of visitors to DCMS sponsored museums and galleries has fallen for the first time in almost a decade, according to new figures. 47.6 million visits were made to the 15 museums in 2015/16 – 1.4 million fewer than the previous year.

The 2.8% decline is almost all attributable to a fall in visitors from overseas, despite an increase in tourists visiting the UK. Overseas visitors now account for 47% of all visitors to the sponsored museums, while a like-for-like comparison shows they accounted for 49%* the previous year. Visits by people from the UK continue to show marginal growth, roughly mirroring population trends.

In contrast, the British Museum, which is England’s most popular museum, saw its overseas visitor numbers grow by 117,000 – the highest growth of all museums – to reach all-time-high visitor numbers of 6.9 million. Its proportion of international attenders reached 64%.

The declining popularity of museums among overseas visitors runs counter to the popularity of visits to the UK as a whole. Official figures record that visits to the UK by overseas residents grew for the fifth consecutive year in 2015 and were 5.1% higher than the previous year. The number of holidays made to the UK also reached an all-time high, and visits to London grew more rapidly than elsewhere in the country, showing a 6.8% increase over the previous year.

Education and loans in decline

Visits to museums by children aged 15 and under, either from within the UK or overseas, have also seen a decline. 7.9 million visits were made to the sponsored museums in 2015/16, a 1.8% fall compared with the previous year. National Museums Liverpool recorded 459,000 visits by children, more than Tate (443,000) and the National Gallery (391,000), both of which experienced a drop in the number of visitors in this age group of more than 100,000.

In addition, there was a 6.9% decline in the number of people under the age of 18 who participated in educational activity and on-site events. “Facilitated and self-directed visits” by those aged under 18 and in formal education fell by 3.1%. Tate was among the more successful museums at attracting this group, with 58,000 more visitors than the previous year.

The number of institutions, organisations, exhibition facilities and researchers who have been loaned an item from one of the DCMS sponsored museums and galleries fell by 7.1%. In 2015/16, there were 1,379 UK loan venues, compared with 1,484 the previous year. Tate, the National Gallery and the National Portrait Gallery all saw a decline in the number of their loan venues.

*This figure was calculated by AP using raw data supplied by the DCMS. The DCMS has agreed that the figure of 47% published in its own report is misleading and will be amended when the next tranche of figures is published.