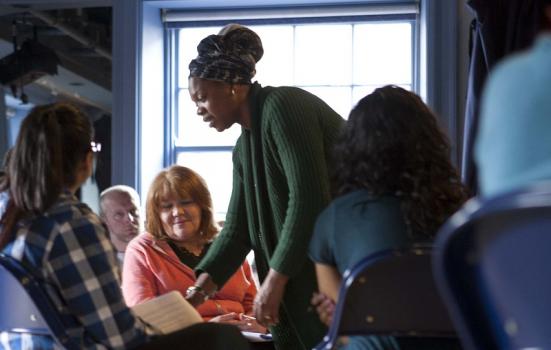 Two theatres named and shamed by The Yorkshire Post for having a lack of ethnic diversity in their permanent staff have been awarded funding by Arts Council England (ACE) to improve their workforce diversity.

Hull Truck Theatre, which had a 100% white workforce in 2013-14 - though a relatively high proportion of disabled permanent staff - has been awarded £111k to work in partnership with Black and minority ethnic (BME) theatre maker Amanda Huxtable from Hidden Gem Productions. The theatre will provide leadership and artistic development opportunities for her over a two-year period.

Similarly, Sheffield Theatres – recorded as 3% BME in 2013-14 – has received £150k to appoint Artistic Director Javaad Alipoor as an artist in residence, using his experience to promote “significant changes” in audience, programming and integrated casting decisions.

The funding forms part of ACE’s £2.57m ‘Change Makers’ scheme, aimed at increasing the diversity of senior leaders within England’s arts and cultural organisations. National Portfolio Organisations and Major Partner Museums bid for grants of £100k to £150k and the 20 successful organisations will each work with one disabled and/or BME leader on a placement which must end before 31 December 2018. ACE received 90 expressions of interest and 55 full applications for the scheme.

“We’re committed to ensuring the diversity of England is better reflected at a leadership level across the arts and cultural sector,” said Abid Hussain, Director for Diversity at ACE.

“Through our Change Makers programme, these twenty disabled and Black and minority ethnic leaders will have an inspiring and transformational opportunity to realise their leadership potential, giving them the confidence and the experience to take their next step into a senior leadership role, helping to shape the future of our sector.”

Other successful Change Makers applicants include:

Significantly, Bournemouth Symphony Orchestra – reported as having 0% BME staff and 0% disabled staff in 2013/14 in ACE’s workforce data – will receive £123k to host an 18-month training placement for James Rose, a conductor with disabilities, who will curate and direct a disabled-led ensemble from June 2017.

ACE is also investing £2.1m in a scheme to support development opportunities for Black and minority ethnic theatre makers.

Eclipse Theatre is to use its £500k award to deliver a programme with ten other organisations supporting over 1,200 Black artists in the North by “increasing access to local, national and international networks and opportunities for BAME artists”. One of these partner organisations will be York Theatre Royal, another theatre named and shamed in the Yorkshire Post article for low levels of ethnic diversity in its workforce.

Tamasha Theatre will establish a new programme to provide full-time paid placements to four regional Black, Asian, and minority ethnic (BAME) Associate Producers, in partnership with seven regional theatres, and the Bush Theatre will work with Battersea Arts Centre to create “a new model of development, placing power and resource in the hands of visionary BME producers and artists”.

Speaking about the award, Dawn Walton, Artistic Director of Eclipse, said: “This funding award is a testament to the work Eclipse has undertaken to change the theatre landscape both on and off stage – to better reflect the diverse demographic of our society. We have consulted dozens of Black artists working in theatre in the UK and they all said the same thing – they feel as if they are working on the periphery of the industry; constrained by an archaic ‘top-down’ approach to theatre programming, leading to a glass ceiling in terms of scale of work they can produce. We’ve also spoken to our audiences who’ve said they want to see new work but there just isn’t enough on offer.

“Times are changing, and the fact we’ve got so many great partners on board is proof of their desire for change, but many institutions are failing to reach these independent artists. This funding will help us bridge that disconnect – by creating and embedding a new model, an international network to sustain and further the career paths of established artists.”

This is not the first time ACE has produced funds to support the creation of work by diverse artists. The 2003 Eclipse initiative was created to produce and tour high-quality Black theatre to major regional theatres across the UK. The multi-million-pound Decibel project, another scheme to support the work of Black and Asian-led companies and individuals, ran from the early to late 2000s, aiming to “challenge the existing arts landscape and create change so that the arts truly reflect contemporary British society”. Decibel regional officers were appointed in every Arts Council England office.

These initiatives either ended or changed form by 2010, leading AP Editor Liz Hill to write in 2010: “Despite facilitating a number of key initiatives (Pearson and ACE publishing scholarships, Sustained Theatre and Decibel, to name just three) and implementing the Race Equality Scheme in 2004, ACE has not outwardly tackled what appears to be stagnant complacency within some parts of the arts sector.”

“But I’ll only truly love them if I don’t see them again.”

The announcement of the two new diversity funds also follows news that ACE will not be tracking workforce diversity in its ‘diversity rating’, an external assessment that National Portfolio Organisations will need to achieve in order to receive funding and avoid sanctions.

Workforce diversity won’t be a factor in Arts Council ratings