Delays and cost overruns to the £45m project are likely as it downsizes to avoid a long and expensive legal battle. 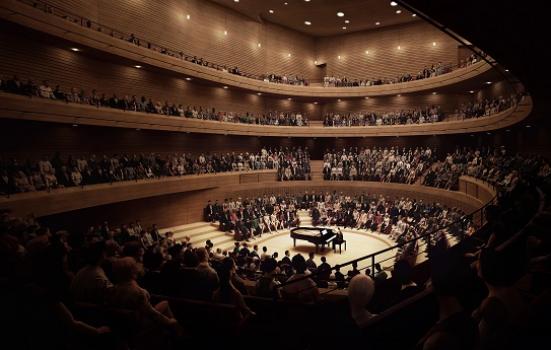 Back to the drawing board: Impact Scotland will have to start the design, planning and permissions project from scratch
Photo:

A £45m concert hall planned for Edinburgh will be downsized to avoid a legal battle with the developers of a nearby hotel complex.

Impact Scotland, a music and performing arts charitable trust, agreed last week to a “substantial redesign” of the Dunard Centre after Nuveen Real Estate, the developer of the neighbouring Edinburgh St James hotel, cinema and shopping complex, petitioned for a judicial review. Nuveen claimed Edinburgh City Council failed to follow a skyline policy for the city centre in approving the project.

Following mediation, Impact has agreed to submit a new planning application that addresses Nuveen’s primary concern – that the height of the concert hall would block the view from its hotel. In return, Nuveen and the council have announced they will quash the judicial review proceedings.

The Dunard Centre was meant to have a 1000-seat auditorium, 200-seat studio, café, bar and all-purpose spaces for education and community outreach activities.

Though a spokesperson for Impact said it was too early to know whether its budget or 2023 opening date will change, overruns and delays are near inevitable as the trust starts the process of designing, consultation and approvals from scratch.

A deal for the city

Nuveen’s insistence on changes at a late stage in the planning process throws a spanner in the works for local and central government. The Dunard Centre, which will be Edinburgh’s first purpose-built music and performance venue for more than 100 years and the new home of the Scottish Chamber Orchestra, is part of the UK and Scottish Government’s £1.3bn Edinburgh City Deal.

The long-term investment deal contributed £25m to the venue, with £10m being fundraised through trusts, companies and individual philanthropists. The Dunard Fund is also making a large donation and underwriting any capital cost overruns and deficits in the centre’s first three years of operation.

In a statement released by all three parties, City of Edinburgh Council Leader Adam McVey said he was pleased there was an agreement to “get the concert hall back on track”, noting its importance in regenerating the east end of the city centre.

Nuveen Real Estate Director Martin Perry said: “We hope the new design will better accord with the aspirations for this quarter of the city.”

Despite the scale of its concession, Impact is pleased with the outcome of the mediation because it has averted a protracted and costly legal battle. In the statement, Chair Sir Ewan Brown said the trust was “hugely encouraged” by its discussions with Nuveen and Edinburgh City Council and will work closely with both parties to deliver a concert hall that meets Nuveen’s “needs”.

The development has long been controversial, with Nuveen complaining Impact’s chosen site near historic Dundas House was unsuitable. Local news outlets say disagreements between the two developers had escalated into a bitter row:  TH Real Estate, an affiliate of Nuveen, wrote to city councillors warning support for the hall would be “a huge and damaging error”, leading to threats of legal action from Impact.
Councillors debated the plans for five hours before granting consent in April.

Scott, who did not respond to a request for comment, wrote: “Not only is this disappointing because they have circumvented the process, but ultimately because it could lead to unnecessary delays. Edinburgh can’t move forward if every application beyond the size of a house extension gets caught up in never-ending debates about the city’s identity.”