Lottery funding, low pay, and that boat…Amanda Parker meets the Arts Council England Chair and architect of the UK’s engagement with art. 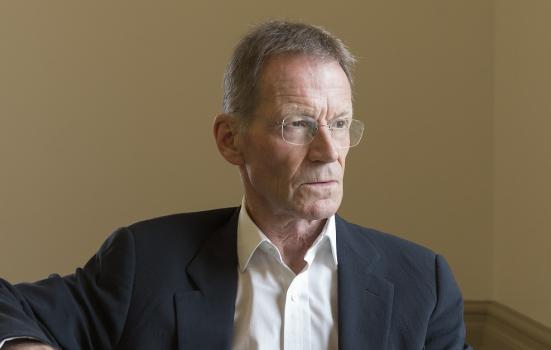 Nicholas Serota is amongst a very small group of non-artists who can reasonably claim to have irrevocably changed how the world sees the UK’s arts – and how Brits engage with culture. From his time at Whitechapel Gallery in the 1970s, through to spearheading the creation of Tate Modern and beyond, he’s been instrumental in creating a profound change in shaping the nation’s view of art and museums, in the process attracting critics and fans alike.

I was asked by a few people whether I’d be ‘scared’ of interviewing him; more than one person suggested he would be hugely intimidating, not just because of his outstanding legacy.

I can understand why: I asked him which actor he’d choose to play him in a film (“no idea”) but if I were casting agent on Serota: The Movie, I’d turn to Patrick Malahide. Both combine acres of charm, with some degree of menace - both are able to strike a chill in any heart without compromising impeccable manners.

Sir Nicholas Serota, Cambridge graduate and son of a peer, is a man of his time, who will say ‘sufficient’ rather than ‘enough’, ‘maintaining’ and not ‘keeping’, and ‘innumerable’ rather than ‘many’. An hour in his company is a delightful reminder of the power of English language when we do without cliché and linguistic shortcuts. Nick – as he prefers to be called – has allowed modern sensibilities to round his edges. This in turn makes him far more approachable than one might imagine, but also slightly daunting as he’s perhaps more likely than some of his peers (he’s in his seventies) to show how he really feels. Not for him the stiff upper lip. Things got slightly heated more than once: like a well-seasoned politician he eschews interruption, instead raising his voice just enough to continue the POINT HE’D LIKE TO MAKE. Politely.

Over decades of globally renowned success, championing visual artists, creating world-leading venues, and now as chair of Arts Council England (ACE), what are his tips for success to share with the sector? I ask him about the stand-out, seat of the pants moments of his career:

“In personal terms there [have been] innumerable scrapes in creating an exhibition, but probably doing the second phase of Tate Modern [was a challenge]… I made the mistake of believing that because the first phase had been so successful – we anticipated 2 million visitors, we ended up with 5 or more – I anticipated that when we embarked on the second phase there’d be widespread support for taking it on. We were hit by two things: one, that people believed that what we’d done already was sufficient, why do more?  And the second – probably the crucial one of course – was the financial crisis of 2008/9”.

How does he stay resilient through challenges of such high stakes?

“You clearly have to have conviction about what you’re doing. My experience has been if you put good things out there in a very consistent way that’s not patronising… [things which] try to break down barriers, people may not always respond positively immediately but you just have to keep going without being too stubborn about it.”

When I later ask him whether it bothers him that he’s sometimes seen as divisive, he at first rebuffs this sharply: “I don’t think I’m divisive. Others have been critical of the art I’ve supported”. But then concedes, “well, sometimes they change their minds”, he laughs quietly.

Will ACE insist on a Living Wage for all?

He’s determined that his legacy at ACE is to be “having given people opportunity”, citing Creative People and Places as a positive example of successful arts engagement with wider communities.

However, low wages are widely acknowledged to be a contributing factor to the lack of diversity in the arts. As a means of increasing workforce diversity, would he support the introduction of a Living Wage pay minimum across the sector? “I would support it, yes. At the Tate we introduced the Living Wage and insisted contractors do the same as far as we were able to.” Would he introduce it as a policy that ACE-funded organisations pay all staff the Living Wage?

“This is under review and we haven’t come to a formal view of it yet. I’m not going to sit here and make policy – at the Tate we introduced paid internships and abolished unpaid internships. I think what we did at the Tate tells you where I stand on that matter”.

Unfortunately this didn’t save him from being the unwitting eye of a storm when Tate staff (including low paid, sub-contracted staff) were asked to contribute to his leaving present of a boat.

He mentions his boat moored in Cornwall as a ‘guilty pleasure’: “It’s only a tiny little boat but I don’t sail it often enough”. He agrees reservedly that most of the fun of sailing is in the idea of sailing, rather than the actual doing of it, and reflects somewhat wistfully on how sailing is “so quiet”.

Where’s the money to come from?

A bullish approach to private funding has seen him secure for projects multi-million pound sponsorships, stellar business partnerships and donations of Premier League proportions. Does he have any regrets about his assertive engagement with what modern sensibilities view as anathema: sponsorship from tobacco and fossil fuel producers?

“No I don’t. I think it’s right that all sections of the community should be contributing to the arts, including business. Society’s attitudes were very different [then] and we should reflect the ethical views of society at any moment. People are sensitive about those questions so the sector needs to think carefully about where it takes money from…and I think it’s up to the individual organisations to make the decisions themselves.”

Should we all be more like Nick when it comes to pursuing private funding?

“I think we should be securing as much private funding as we can but I also think a healthy society wants to invest in those things that are part of everyone’s lives. The investment in that through Lottery and public funding is lower than in other countries so its difficult to say there’s ‘too much’ [reliance on public sector funding]”.

However, Serota goes on to point out that there are “pockets in almost every community” of under-engagement with the arts – areas who are more likely to be contributing to the “regressive taxation” that is the National Lottery. I question whether the sector ought to be less comfortable with Lottery funding.

“You’re generalising so widely when you say ‘we as a sector’: I see no problem with arts being funded by the Lottery that are enjoyed by local communities…it is a regressive tax but I think that if you look at the way the Lottery is being used and being put into programmes like Creative People and Places, it’s reaching people not usually engaged in the arts, so I think that’s a good use of Lottery funding”.

We have a mild disagreement about how to incentivise organisations to encourage greater diversity in the workplace when he offers ACE’s current position on driving diverse change: “I think that we as a funding body need to be really close to the organisations and spot when things aren’t going well and comment on that”.

I ask at what point do we stop commenting and take action, to which he asks sharply, “Well what would you do?”. I suggest a few options, including penalising sanctions such as reducing the funding of those who don’t meet targets. He says: “They are all sticks, but the carrot is more effective than the stick”.  However it seems that since our meeting he’s had some change of heart: in the announcement of ACE’s latest diversity statistics he himself states that “failure to meet [diversity targets] will have an impact on future funding”. I suspect my rant was just the latest in a number of similar sentiments he’s heard during the strategy consultation. I personally welcome the introduction of the stick.

To lighten the mood I ask: what makes you really laugh – a real belly laugh? It’s possibly the most awkward moment of the interview. There’s a long silence. “Oh gosh.” Silence. He says, smiling, “I probably don’t ‘belly laugh’ as you put it… I don’t know, I don’t know. Puns are pretty good – language is pretty good in terms of laughter, yes”.

He professes to make no distinction between work and play, and admits to taking work home “too often, yes”.  To unwind, there’s long walks, and occasional sailing. What’s the last silly thing he’s done? There follows another long silence.

“Well it isn’t silly but what was pure fun in some respects but rather disappointing in others was watching Arsenal play Sheffield United on Saturday”.

I’m sure punsters could have a field day with that.