When your audience is also part of the crew

Working with rural communities to stage small-scale performances is good for the arts, the environment and local people, writes Sophie Motley. 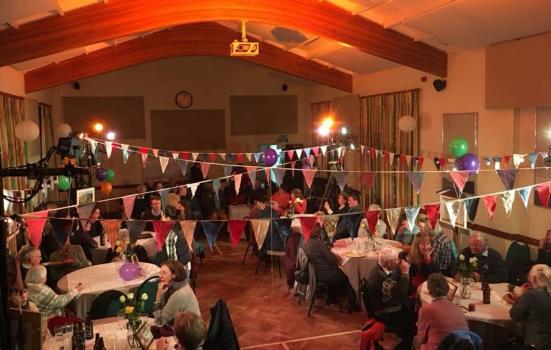 An audience at Cawley Hall in Herefordshire
Photo:

Pentabus makes theatre in rural village halls. These are wonderful spaces – mainly because they are intimate, ever-changing performance venues, but also because they do not belong to us, the artists. They belong to the community: they are owned, programmed and maintained by the people that they serve. Your audience is making your tea, showing you where the lights are, setting up the front of house area, selling tickets and running the bar. It’s the ultimate in inclusive art making.

Rural touring is also one of the most environmentally sustainable forms of theatre. The majority of audience travel less than three miles to get to us and a large number travel on foot. In isolated rural communities with terrible public transport access, that’s pretty brilliant.

But while being a discerning bunch, rural audiences don’t necessarily have a huge choice in what they get to experience. It’s often just ‘the event that is happening in the village hall next Saturday’. Many attend simply because it’s a cultural event.

So, how do we develop a new audience in isolated places? How do we give a rural audience more agency in the work that is presented in their community spaces? How do we encourage the risk-averse to programme challenging art? And how do we bring art to places where it has never been before?

While rural audiences have their own, often visceral, reactions to the work that they see (and are happy to tell performers and touring companies about them afterwards), they are rarely involved in making the work. Our answer was to ask them to commission a show.

Over the past five years Pentabus has run two promoter development schemes: a pilot working with Live & Local in the Midlands from 2015 to 2017, and another with Creative Arts East in Norfolk from 2017 to 2019. And we’re about to embark on a new scheme with Arts Alive, working across Shropshire and Herefordshire. These involve bringing together a group of gatekeepers for rural audiences – the village hall promoters themselves. We show them the entire artistic process and then work with them to commission a new piece of theatre.

How does it work?

We partner with a Rural Touring Scheme and through their contacts – plus a few of our own – we get a group of village hall promoters together. These are the people who make rural theatre happen through booking events.

The promoters might come from well-heeled villages that regularly present theatre in their halls, or they could be on the committee of a hall that has never programmed theatre, in an area with little or no arts provision. But the formula is essentially the same everywhere: tea, talk and time equals trust. When people trust the artists, they will take risks in presenting their work to their community.

We run sessions with the village hall promoters every quarter. We introduce them to a playwright, who listens to them talk about their experiences with presenting theatre and then digs deeper into the psyche of their rural communities – exploring the hopes, thoughts, triumphs, disasters and difficulties of rural life. The writer goes away and responds creatively to the promoters and, over the next 18-24 months, writes three drafts of a new play in direct response to feedback from the community. The group will feed into ideas, read drafts, discuss marketing materials, see designs, and watch a work in progress performance in one of their halls.

Pentabus then casts, rehearses and produces the show, and the promoters will then go on to programme it in their halls. This is the most important part of the process. These key gatekeepers within rural communities will not only bring the work into their venues but will also go on to promote it themselves – putting up posters around the village, calling those that they think would enjoy the work, bringing on board a team of volunteers to sell drinks, make meals for the touring company, and sell raffle tickets (most village halls performances have a raffle during the interval).

What does it do?

This way of commissioning work enables the artists to get close to the audience and make theatre that directly responds to their interests. More importantly, it breaks down the perception of theatre as lofty, difficult to watch, or only for certain people. It enables work to be made in a democratic space, where artists need to listen to the concerns of the audience throughout the entire commissioning process, and where promoters need to critically engage with the work. Through their own understanding of how and why a piece of theatre is being made, their ability to recruit audience members from their community and their ownership of the work exponentially increases, bringing new and different audiences to the work.

Why should we develop rural audiences?

Rural audiences are typically ‘audiences of place’, choosing to experience work in their own community space rather than actively travelling to a different location to see it. This means village hall theatre combats both social and rural isolation, and gives young people somewhere to go on a Thursday evening (we offer free tickets to under-25s to encourage them to visit their village hall to see our work). Most importantly, it provides much-needed entertainment and community cohesion through sharing often important and unheard stories.

So by seeing work in your local space or village hall you are lowering your carbon footprint, backing the arts, and supporting your local community.

When your audience is also part of the crew