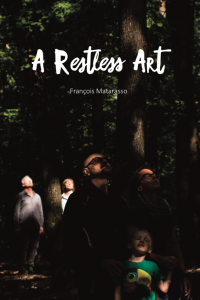 ‘A Restless Art’ could be called ‘everything you ever wanted to know about participatory art, but were too afraid to ask’. The book combines a nuanced, careful study of participatory art with a detectable passion, born of Matarasso’s lifelong experience of the form. This is not dry dissection: the writing is lived, in the field, partisan. ‘We’ is used as often as ‘I’ – a trait which gives the book grounding and warmth.

Although the history of participatory art stretches back decades, it is poorly documented – with the thousands of artists who have worked in this area doing so mostly “on the margins”. However, Matarasso claims that participatory art has now been ‘normalised’ and accepted by the mainstream, a shift which constitutes “a historic, welcome realignment in our idea of art”. He points out recent headline successes: Jeremy Deller’s ‘We’re Here Because We’re Here’; Jenny Sealey’s 2012 Paralympic Opening and art collective Assembly’s 2015 Turner Prize win. Even Sir Nicholas Serota (Chair of Arts Council England (ACE), at “the epicentre of the British arts establishment”) has made the case for participation, as ACE invests £90m in Creative People and Places – a largely participatory arts programme.

Running through the book is the case for an emancipatory cultural democracy in which more people have voice and agency. In tracking this most chameleon of art forms, Matarasso puts his head above the parapet: offering definitions and making robust, evidenced claims for a ‘restless’ art, fostering social change and making work with people about things that are “most urgent”. There is boundary crossing not only between artform disciplines, but between the sectors of health, education, criminal justice, housing, and within communities everywhere. This is typical of the sophisticated approach that is now shaping new research and policies, such as the social prescribing advocated by the All Party Parliamentary Group on Arts, Health and Wellbeing.

Practitioner readers will sigh with relief, finding recognition and a certain homecoming in each sentence. Finally! A mapping of the lesser-seen liminal places in which participatory art finds fertile, shifting, dynamic ground: on shorelines and in care homes; as well as hospitals, basketball courts, the high street, dairy farms, churches, cafés, billiard halls, prisons, libraries, children’s centres and community halls. The book contains a mass of examples to flesh out Matarasso’s thesis - many from the UK, but also from Portugal, Poland, Finland, Lithuania, Egypt and elsewhere. Fun Palaces, which are most vibrant in the UK’s areas of greatest poverty, get their place in the sun. Equally recognised is the creative vitality in Cairo’s Tahrir Square in 2011 and in a community art project in Dourgouti, a poor neighbourhood of Athens, during years of Greek austerity: conversations in cafés and on the streets. My favourite was Chickenley School in Dewsbury, West Yorkshire, where over a ten-year period, pupils had access to the art room whenever they wanted during breaks and lunchtimes. This initiative, led by artist Mary Robson, dramatically improved the collective mood and confidence of the school as a whole.

Matarasso’s definition of participatory art is that it involves professional artists working with non-professional artists: in this way, skills combine to make creative things happen, and everyone is recognised as an artist in the process. Contentious issues are headed off at the pass: quality and social intention are not mutually exclusive; process and product are as interesting as each other. Damage is done by commissioning institutions demanding artists “do more, with less and prove the outcomes”, sometimes while  actually having low expectations of the work. Matarasso takes a (welcome) swipe at ‘evaluation regimes’ that ask artists to anticipate social impacts of work before they’ve left the starting blocks. Combined with the low levels of formal professional training on offer, it’s no wonder artists in the field can feel as though they’ve been ‘walking up a down escalator’ for decades.

If badly defined, participatory art can be misunderstood, or worse, mishandled by those not understanding its powers, processes and complex ethical, political and artistic dilemmas.

So it’s welcome that the questions ‘what is participatory art?’ and ‘where does participatory art come from?’ are at the heart of the book. The ethics of collaborations between professionals and non-professionals are well covered: where does power lie? who is in control? who has authored the work? what assumptions have been made? what if someone does not want to participate? who is paid? whose interests, ultimately, are being served?

The nuanced complexity of participatory art is honoured, as are its roots and rebel history – with the distinction between community art and participatory art made clear. (The former was prevalent in the 1960s and 1970s, and is a more radical concept. Matarasso calls himself a community artist.) I loved this part of the book, recognising the point where I’d entered the field as a practitioner, politically and creatively (establishing the LIFT Festival in 1981, midway between Margaret Thatcher’s 1979 arrival and the miners’ strike of 1983). The narrative of art is taken back to the 18th-century Enlightenment, when the status of being an individual artist was elevated, along with their artworks, and the judgements of fine art made by elites. Matarasso argues that this led to a social divide between ‘purists’ and ’democrats’ – which  is only now being healed with the advance of participatory art. The author’s own seminal 1997 study, ‘Use or Ornament’, validated art as something we participate in rather than watch, covet, collect or consume.

But given the strong case he makes for participatory art’s capacities for democratisation and connection to the things that matter in people’s lives, I was flummoxed by some of Matarasso’s conclusions.

”Understanding what is happening in participatory art now is difficult”, says Matarasso. Having been so proud of earlier battles and struggles for participation and enjoyed so many of its fruits, he seems almost to hand over to a younger generation – at a time when political, social, economic, ecological challenges are severe, and there is a need of more experienced heads to provide support and expertise.

Matarasso does refer to the key systemic failures affecting people’s lives: a neoliberal system extractive of nature’s resources; the 2008 financial crash; increased migration; the manipulation of political elections; climate change and our unbalanced relationship to the natural world. But there are few examples of artists working in these contexts, especially ecologically.

Near the beginning of the book he says: “Participatory art cannot solve these existential challenges. But it might help us face them, in the places where we meet and live.” Absolutely! As a society, we need courage to face the ecological, political, economic and social uncertainties that lie ahead. And (I believe) participatory artists are well-placed to build the spaces in which that is possible: where the rebel, the idealist, and the democrat can come together and contemplate the greatest existential threat to life on Earth. Surely this would underline the ‘historic realignment’ that Matarasso argues has taken place?

If ‘A Restless Art’ maps “how participation won, and why it matters”, can we not show more convincingly how participatory arts are concretely, restlessly and ceaselessly stepping up to such challenges? (A look at the Season for Change website reveals a great wealth of participatory work responding to climate change, for example). Examples like this flesh out Matarasso’s hope that participatory art might be “a valuable tool for building a better future”.

At the outset, Matarasso makes a suggestion that people reading the book talk to him about anything they wish to. I look forward to engaging very much. There are important conversations to be had.

Those working in the field will fall on this book with gratitude and delight for the clarity it provides in a nuanced, demanding, rewarding and complex field.

Lucy Neal is Creative Associate with Encounters Arts and the author of ‘Playing for Time - Making Art As If the World Mattered’ (Oberon 2015).