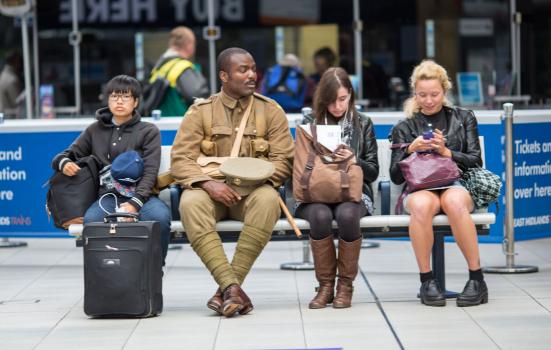 Having worked as executive producer for the Cultural Olympiad’s London 2012 Festival, and for the 14-18 NOW arts commissioning programme marking the centenary of the First World War, I know that the starting point of both was the quality and appeal of the artistic ideas. Each programme put artists’ vision and work at its heart, believing that this is the best and fastest way to support the creation of compelling new work.

They brought to life works like Royal de Luxe’s 'Memories of 1914' in Liverpool, Ryoji Ikeda’s 'Spectra' – a week-long installation that sent a pillar of light into London's night sky – and Jeremy Deller and Rufus Norris’ 'we’re here because we’re here', which sent small groups of young men in authentic First World War uniforms out across the UK on the centenary of the start of the Battle of the Somme. None of them spoke, but if you addressed them they handed you a card with the name of the soldier they were representing, each of whom had been killed on that day a century before. It had the most extraordinary and moving impact.

These were all notable for their artistic quality and ambition, as well as the astonishing numbers of people who experienced them. And importantly, they all helped people feel that bit better about the places where they live and work.

London and other major cities are great places to present these kinds of projects. The cities’ authorities have a deal of experience in supporting ambitious cultural events. There is a widely shared understanding of the benefits these bring to cities and a real appetite to help realise them. There is, of course, a tension between branding a major event as city-wide and the reality of the delight and disruption experienced in the event’s particular location. We work in boroughs and neighbourhoods of a city, not the city as a whole. This reality increasingly influences the conception and planning of such events.

The importance of development

Often the germ of an exciting idea needs to be tested before it finds its final form. For example, Jeremy Deller’s project was initially conceived to take place over two days, with total secrecy about who was behind it. As it turned out, it was hard enough keeping it secret for one day – a two-day event would have been impossible.

Aside from the artistic idea, the team proposing and managing the project needs to be strong, experienced and credible. The risks involved are varied and substantial and all the authorities – and the public – need to have confidence they will be well managed. I have been involved in more than one event where the person with the creative idea needed strong intervention to ensure the team delivering their event had the skills to take the inspiration, refine its shape and deliver the resulting project.

There needs to be an appreciation of the depth of effort and resources the relevant authorities invest in planning and delivering a cultural event. All such projects require a lot of hard work from people with day jobs to do. Cases for support need to be made. Issues need to identified, understood and addressed. The appeal and benefits of the project need to be easily communicated and grasped.

Strong governance is key, and the governance of 14-18 NOW provides a short case study. The organisation was set up by the UK Government, which announced the project in June 2013 and appointed the Chairman of our board, Vikki Heywood. The Chairman then led the recruitment of the rest of the board and the senior executive.

The board’s first task was to put in place the right legal structure for the programme. The founding members were clear that if they were to be responsible for the success of 14-18 NOW, they would need full decision-making powers. Having looked at a range of options, the board decided to take up the offer from the Imperial War Museum London (IWM) to be hosted there.

The museum was already at the centre of the First World War centenary programme, so offered an appropriate frame and expertise. 14-18 NOW would be managing large amounts of public and Lottery funding, and IWM had a strong financial record and a scale of operation which could handle a large one-off project without being destabilised. And while it had a long-established practice of working with artists, it was not associated with any particular artform or committed to any mission which would rub against the ambition and breadth of 14-18 NOW’s objectives.

So the board became a special project committee of the museum trustees under a clear operating agreement, which gave it appropriate authority over the whole programme, provided it abided by agreed conditions regarding mission, reputation and finance. Our Director reported to the Chairman of the board and to the Director-General of IWM; while our Chairman continued to report directly to the Secretary of State.

This innovative arrangement – on paper perhaps a clunky hybrid – proved essential to the success of the programme. In summary, 14-18 NOW was set up by the government, established independently and hosted within the most appropriate major institution. There is a really valuable model here for future programmes of similar ambition: let each relevant sector bring what it does best to the table and find the best way of working together to deliver success. Our relationship with IWM led to major creative collaborations, including on Peter Jackson’s extraordinary film ‘They Shall Not Grow Old’, and on a tour of the ‘Poppies’ sculptures from the 2014 Tower of London installation.

When asked to look ahead I worry about the financial pressures on the police and local authorities, whose active support is essential to large-scale public events. I fear that as these pressures increase, it will become harder for these vital partners to free up the resources needed by these cultural events, however much they may wish to. Major cultural programmes are important elements in the warp and weft of city life: they give great public value but are as subservient to the ebb and flow of government policies as other areas of public life. We cannot separate the financial investment needed for these events from the financial investment needed by those providing all essential public services.

Given that I have used the word ‘value’, I’d like to add that the voluntary arts sector is expert at providing value for money. Sadly, I have more experience than I would like of helping people do this while wrestling with inappropriately restrictive procurement procedures often designed for other sectors, a process which has inadvertently led to inefficient use of time and resources. And that is with the help of sympathetic and inventive procurement teams – without their help the results could have been far worse.

There are always fears and frustrations. Nonetheless I remain confident in the future. The people leading major cities have the understanding, the will and the capacity to continue their imaginative approach to improving all our lives through their support of ambitious and transformative cultural programmes.

This is an edited version of a speech given at the Westminster Policy Forum for London Keynote Seminar: Next steps for arts and culture in London: funding, participation and infrastructure.