Beyond sport, monarchy and wars 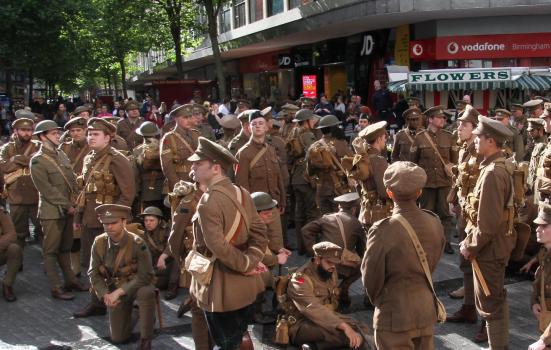 Commemoration of the Somme in Birmingham, 2016
Photo:

In a period marked by some of the most divisive politics in recent years, the centenary of the First World War brought people together in a way many welcomed. A report published in July by the DCMS Committee emphasised the huge success of the UK’s arts-based approach to commemoration. The questions which remain are how the lessons of this success can be applied, and whether the range of events on this scale can go beyond sport, the monarchy and wars.

Profound questions about tone, diversity and content coincided with fears of audience fatigue

It is tempting to gloss over how difficult the centenary felt at the outset. The 2012 Olympics and the Queen’s Diamond Jubilee in the same year had shown it was possible to mark moments of complex international significance in new and engaging ways. But how could anything match the joy and brilliance of Danny Boyle’s opening ceremony? The anniversary of the outbreak of the First World War was a very different event, recalling destructiveness on a scale never before imagined. Profound questions about tone, diversity and content coincided with fears of audience fatigue (given the four-year commemoration period).

The first major lesson for the future is that for engagement to occur, the public should feel a commemoration or celebration has relevance to them. British Future’s tracking survey (published earlier this year) concluded that in 2018, rather than feeling overloaded with information, audiences were left hungry to learn more. More than half (56%) of people surveyed said the First World War was relevant to them – although the sense of relevance was less shared by young people and those from a non-white background. The most common reasons given for the war’s relevance were its impact on the society we live in today (77%) and family connections (49%). The sheer range of partners, platforms and media channels involved provided the opportunity to illuminate the central story with new narratives, driven by the interests of people and communities.

The second major lesson is that maximum impact can only be achieved by combining imaginative cultural programming with more traditional mainstream media coverage. 14-18 NOW, the centenary’s cultural programme, engaged 35 million people through a profound belief that contemporary artists would be inspired, not daunted, by heritage and archives. They opened up the commemorations, inviting people to join in spectacular free outdoor events.

Traditional broadcasters also did a lot of the heavy lifting in reaching out and raising awareness. People tended to hear about the centenary predominately from TV, with the BBC the most commonly cited source. National commemoration events were carried live alongside hundreds of hours of original programmes on television and radio – the biggest season ever of its kind. The BBC found high awareness of its coverage – over 80% of the adult population – across the four years, with noticeable spikes in 2014 and 2018. Many said they learned something new from the coverage and that it encouraged them to explore further in a wide variety of ways.

Indeed, despite the importance of large-scale media and projects to its success, a strength of the centenary was how it developed in a way that was social, organic and interactive. Between 2014 and 2018 British Future noted “a subtle shift away from traditional media sources, as more people learned about the centenary through Facebook and other social platforms”. After TV, word of mouth became the second driver of awareness, indicating that “the nation had got talking about the centenary”. Many put words into action, with millions of visits to events and activities around the country. The centenary programme also inspired 21st-century immersive experiences: virtual reality, 3D animations, digital colourisation, voice technology and drones all enabled artists and content creators to experiment with technology that will shape future commemorations of the seismic events of the 20th century.

Interestingly, people rated the tone of information they received about the centenary more highly in 2018 – for almost every platform – than they had in 2014 or 2016. This is perhaps evidence that the experience of sustained collaboration – sharing data and ideas to frame and shape each new stage of the centenary – made participating organisations more responsive to audiences over time.

Work to be done

But there were limits to what the centenary achieved. There remains a significant proportion of the population – approximately three in ten – who are unaware of when the First World War started and ended. And there were others for whom more could be done to make shared history feel relevant. Focusing on why a part of the public was left behind is vital if we are to devise new strategies to involve them.

The challenge now is ‘what next’? We need to broaden the appeal of the First World War centenary to those who missed out this time, and also find ideas for national celebrations and commemorations which can resonate among new audiences.

There is still work to be done to consolidate the achievements of the centenary project. For one thing, the First World War is now the most digitally documented period in history. No one can determine how researchers will want to explore the assets created through the commemorations – or communities curate them. But without the tools and data to do so, there will be a fundamental question of purpose not just for professionals, but potentially too for the millions who took part in projects and events as a contribution to shared history. In that sense, the centenary has become an important testbed for indexing and keeping the co-created resources of the first commemoration of the digital age.

But the second challenge is the greater one. The public appetite and the public benefit are there, but can we come up with other ideas than those inspired by two world wars, the monarchy and our passion for sport? 2039-2045 is a long way off, and it’s impossible to predict with any certainty the international context in which it will be commemorated in the UK and around the world. The anniversaries of the partition of Ireland in 1921, and of the formation of the BBC in 1922, will both offer different opportunities in the more immediate future to broaden understanding and engagement.

There is space for new thinking. It would be a missed opportunity of some proportion if the commemoration of the First World War was seen, in retrospect, to have been a one-off event rather than the foundation for new creative ventures that involve more people in exploring who we are.

Jane Ellison was Head of Creative Partnerships at the BBC from 2014 to 2019.

Beyond sport, monarchy and wars