Pauline Bailey looks back on a project that developed social confidence and artistic expression among Birmingham's BAME elders. 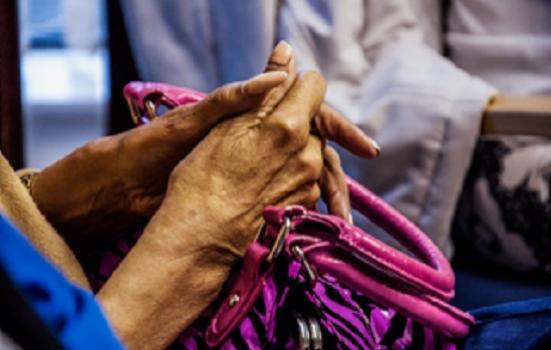 Why was this project needed?

In 2016 after the demise of Birmingham’s The Drum arts centre, Arts Council England and Birmingham City Council earmarked funding to enable other organisations and artists to deliver arts projects with under-represented groups across the Aston and Newtown area. The Black Arts Forum (BAF) was one of the organisations best placed to deliver these. We secured funding and embarked on engaging the groups we identified. Many projects proposed working with young people, leaving local elders less well-served in certain areas of the city.

The elders were offered taster sessions in four strands of activity: art and crafts; movement and drumming for wellbeing; storytelling; and music. This took place in a variety of centres and residential homes where elders gathered on a regular basis. Through our evaluation we learned that the groups were keen to continue with the activities over a more sustained period. Based on these findings, we designed the project across the four strands of activity.

The key aims were to address loneliness, isolation, mental health and wellbeing and provide opportunities for elders to become more active citizens and broaden their social networks.

What did it involve?

All the activities in the four strands of activity were documented through both video and photography. This led to an exhibition that was toured to MAC Birmingham in the south of the city, and other north and central venues including the Library of Birmingham’s art gallery. Some elders preferred to share their work within their own small groups and retained it for private use with friends and family.

Each strand was led by a local artist, who worked with the elders to articulate their culturally specific stories from the Windrush generation and facilitated sessions where they could co-design their final piece. The former BBC Young Jazz Musician of the Year Xhosa Cole, for example, worked with elders to create new arrangements of Caribbean folk songs with poetry. The movement for wellbeing and drumming project enabled elders with limited mobility to participate, either by using a chair or walking stick.

There were also social activities where the elders came together to share their experiences through film, discussion and interactive sessions in the Black oral tradition. These gatherings always involved the sharing of food.

Elders experienced many firsts throughout the project, including:

What were the most successful parts?

What were the least successful parts?

Which aspects were most rewarding?

The most rewarding moments were observing the elders recognising the benefits and rewards of their journey through the project and having the records of this to share with family, friends and members of the public. It was also a pleasure to see their pride in their achievements and tangible improvements in their health and wellbeing.

It’s great that we now have a permanent exhibition that we can tour to different venues in the future. Elders have stated publicly and through feedback forms their wish for the project to continue, and artists expressed satisfaction in being able to add this to their portfolio of work.

Elders were able to combat loneliness and isolation through gaining the confidence to socialise with others and participate in fulfilling activities. They now have an appetite to try out more arts and creative pursuits.

MAC Birmingham for the first time hosted large numbers of elders from BAME communities in a highly successful showcase event. The same applies to The Lighthouse, the Library of Birmingham and Grosvenor Road Studios – a thriving community arts hub.

What have you learned?

We’ve learned that mainstream organisations work in a very different way to those in communities, as their systems are less flexible.

We’ve also realised that it takes time to develop elders’ understanding of how socially engaged projects can benefit them and address their needs. The Black Arts Forum have evidenced through this project that the arts should be for all and that there is a healthy demand among this demographic.

How will you build on the project in the future?

We already have legacy: some of the elders are continuing work on further creative projects such as writing and performances. And some have recorded their Windrush generation stories in a partnership project with Writers West Midlands and Speaking Volumes. Other participants hope to participate in further projects, but this depends on securing funding.

Pauline Bailey is a visual artist, curator and Co-Director of the Black Arts Forum.
www.blackartsforum.co.uk