Listening to children on climate change

What does climate change mean to the generation it will impact most? Brad McCormick explains how primary schoolchildren have been working with climate scientists to develop their own play. 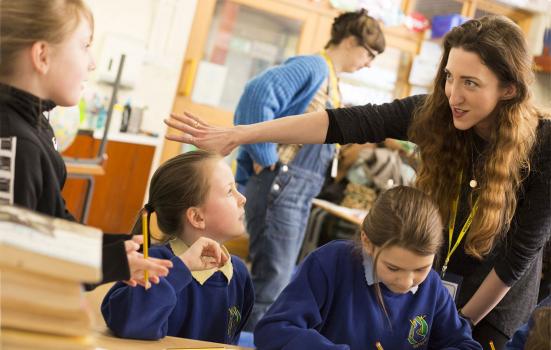 Cap-a-Pie has wanted to make a piece of theatre about climate change for some time. We’ve made theatre that dealt with the natural world in the past (our show Six Legs is about insects). But we felt that making something about arguably the biggest issue ever to have faced humankind would not just be interesting - it might also have a usefulness beyond being a piece of entertainment.

We specialise in working with people of all backgrounds, ages and abilities to create touring theatre and community and education projects. We partner with those engaged in thinking, learning and discovery - including educators, researchers and scientists.

This project - called Climate Change Catastrophe! - was funded by a Royal Academy of Engineering Ingenious award. It brought together two Year 4 classes at Hotspur Primary School in Newcastle, two professional actors, a songwriter, a theatre designer and climate researchers from Newcastle University’s School of Engineering to start making a play about climate change.

We spent mornings in the school delivering theatre workshops, exploring climate change (and the role of engineering in preventing it, mitigating it and adapting to it), and generating material with the pupils for the play. In the afternoons, the actors went to the rehearsal room to work on what was created in the classroom. The next workshop would involve showing and shaping with the students what we’d done in the rehearsal room, exploring more climate science and creating more material, including an original song with singer-songwriter Katie Doherty.

The climate researchers were always present in the classroom. They bring invaluable expertise to this kind of project, ensuring the accuracy of the science, offering new perspectives and contributing different ideas to the creative process. Having them on board is a unique twist: engineers are people we don’t associate with climate science, but they are working towards tackling the problem.

In this instance, whenever there was small group work we really enjoyed seeing the academics attach themselves to a group, helping to shape what was being developed through their knowledge of the science and provoking the pupils to think differently. The engineers also encouraged the students to think about their own role in a complex and interconnected problem.

Together, we created a 25-minute piece of theatre that we shared with an audience at Northern Stage. It involved many short scenes, the majority of which came from the pupils themselves, some recreated word for word. Some had fictional characters (Rosalina the Polar Bear) and some we classed as non-fiction (the students writing a letter to the human race about why little was being done about fighting climate change).

We wanted everyone to see that the content of the play had come from the students themselves, rather than taking their ideas and going in a different direction. Part of the reason we wanted to work with young people was to tap into their imagination and sense of logic. Those things can bring a play to life. That’s why we love the scene of two turtles in a flooded city swimming across town, and why we included a section where the actors pretend to be cats, the reason being that people might pay attention to a serious message if cats were involved because “people like cat videos”.

The other reason we involved primary-aged children was a bit more symbolic. If we don’t do something about the changing climate, they are the ones who will bear the brunt.

Right now, we have 25 minutes of theatre but we want to make a full-length show of 45 to 60 minutes for young people and families to be performed in theatres, schools and community venues. We’re thinking about how we can involve more young people, and work with a broader range of scientists and engineers when we come to finish the show.

This way of working seemed to have a lasting impact on the pupils’ knowledge of climate science and engineering. Using actors allowed us to work quickly and involving the climate researchers brought the weight of the subject matter into the classroom. And despite the seriousness of the content, it was really fun to do.

Towards the end of the project, we asked the pupils what it was like to see what they’d said and done in the workshops performed on stage. One pupil replied: “I felt listened to.” It wasn’t a response we were expecting but we were really pleased to hear it. We’re hoping that people in power and other grown-ups also listen to what young people are saying, so we can avoid a climate change catastrophe.

Listening to children on climate change