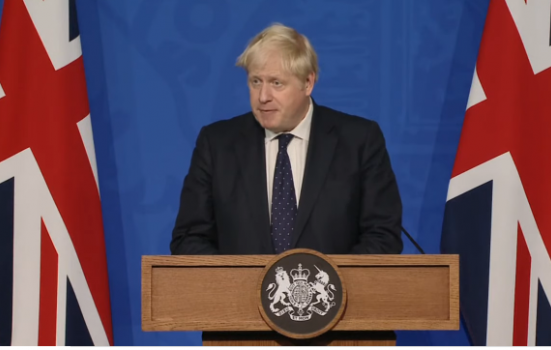 Vaccine passports 'might still make the difference between keeping businesses open at full capacity or not', the PM says

Vaccine passports will be kept "in reserve" in case of worsening Covid-19 rates, the Prime Minister has announced.

Boris Johnson, outlining the Covid-19 Winter Plan for 2021 on Tuesday (September 14), said the Government won't proceed with plans to introduce mandatory certification for higher risk venues in England this month, but instead work with business to prepare for the possibility.

"It's just not sensible to rule out completely this kind of option when we must face the fact that it might still make the difference between keeping businesses open at full capacity or not."

While the policy shift will come as a relief to many venues, it leaves an axe dangling: infections have begun to climb again and the Government is not ruling out more severe measures - including a fourth national lockdown - if necessary.

It also creates a split between nations, with Scotland having already approved a passport scheme for October 1.

The Music Venue Trust last week said Scotland's version was "lacking in detail" and likely to confuse promoters and the public since its required use for 'nightclubs and analagous premises' could potentially apply to pubs, bars - "pretty much everywhere where celebrations through a community activity are being enjoyed".

The Government hopes not to need to extend the passports more widely, but says it "cannot be entirely ruled out".

Plan A vs Plan B

Vaccine passports are part of England's 'Plan B', which could be introduced to prevent "unsustainable pressure" on the NHS.

Plan A involves booster jabs for over-50s, with the Government urging full vaccination as the most effective safeguard.

But the plan could change quickly if "concerning data" arises, the Government warns. At that point, the NHS Covid Pass would change to display full vaccination status only (venues can check for a 'shimmering' screen to make sure patrons aren't just showing a screenshot).

"Mandating vaccine-only certification would be preferable to closing venues entirely or reimposing social distancing," a 32-page document reads, noting the increased risk of catching Covid-19 in venues that encourage singing or dancing.

"Although the Government does not want to legally restrict any of these activities, it can inform people of the risks and offer advice on how to mitigate them."

Exemptions to certification would remain for those who are under 18 or cannot be vaccinated for medical reasons.

Face masks could also return as a requirement in enclosed spaces under Plan B.

Lateral flow tests are staying as an option for now, though their universal free provision will end at an as-yet undecided stage, with individuals and businesses then expected to bear the costs.

Recent data from the Office for National Statistics shows 11% of people have been asked to present their vaccination status or negative test result to enter a venue or event.

Unofficially there is a Plan C: "More harmful economic and social restrictions would only be considered as a last resort," the paper says.

"While the Government expects that, with strong engagement from the public and businesses, these contingency measures should be sufficient to reverse a resurgence in autumn or winter, the nature of the virus means it is not possible to give guarantees."

The Liberal Democrats called out Conservatives for having "flip flopped" on vaccine passports.

The PM rejected vaccine passports when he relaxed restrictions in July, then backtracked immediately and said nightclubs would be required to use them by October.

His spokesperson reasserted plans to pursue the policy earlier this month to the chagrin of cross party politicians. This week, Health Secretary Sajid Javid signalled otherwise, saying "we shouldn't be doing things for the sake of it".

"It's time for the Conservatives to end their chaotic flip-flopping and rule out these illiberal, unworkable vaccine passports once and for all".

The effectiveness of the NHS Covid Pass is being assessed through the Govenment's Events Research Programme, earlier stages of which said requiring full vaccination or a negative test result would help keep cases down.

"This idea has always been discriminatory. We've proven we can run safe events."

More detail about the passports will be published shortly to help businesses prepare.