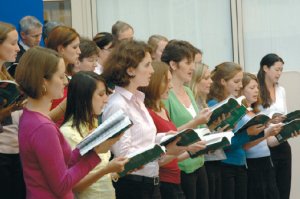 Choirs from five of London’s top City firms – Deloitte, KPMG, Morgan Stanley, PricewaterhouseCoopers and UBS – and the UBS company orchestra, will perform in the Barbican Hall in June, alongside the BBC Singers and 150 schoolchildren. The Barbican is providing its facilities and services free of charge, and profits will go to charities nominated by each of the five companies. The project grew out of last year’s BBC Singers concert series, Singers in the City, created by the current project director Clare Delmar, who identified a growing appetite among the City’s professional and financial services firms to support their staff in pursuing creative, inspiring and social activities.

Voluntary Arts Network (VAN) is planning to create a manifesto for public participation in the arts, to provide the public with a clear statement of what they can expect from arts and crafts practitioners, venues and companies. VAN is calling on senior managers and board members of national voluntary arts umbrella bodies to be involved in a consultation on the development of the manifesto. An inaugural public consultation event will take place in London on 9 June.
e: ginny@voluntaryarts.org

Members of BECTU, the trade union representing technical and front of house staff in more than 200 regional theatres, have voted to accept a 3.5% increase in the minimum pay rates set out in the Theatrical Management Association collective agreement for 2008/09. The new agreement, which applies from this month, also provides for a 3% increase in all other payments and allowances and for an increase of 0.5% in the employer’s pension contribution.

Vocaleyes, the audio description service for blind and partially sighted people, is working with dancers and artists from Rambert Dance Company to research how best to create access for visually impaired people to contemporary dance. The research will culminate in an audio-described matinée performance, next month, of two pieces, Carnival of the Animals, choreographed by Siobhan Davies, and Scribblings by the American choreographer Doug Varone.

MDA, the Museum Documentation Association, has been relaunched as the Collections Trust. Its role will be to provide advice, support and guidance to professionals and the general public to help them achieve the highest standards in the management of their collections, including the provision of expert guidance for museums and galleries, private collectors, and the art and antiquities trade.

The Charity Commission, the independent regulator for charities in England and Wales, and the DCMS have jointly prepared new guidance for arts charities on conflicts of interest. The guidance highlights a range of issues that might arise, including conflicts of loyalty and direct or indirect financial gain, and explains how to deal with any transactions that involve a trustee benefit or are conducted between a trustee and the charity.
w: http://www.culture.gov.uk/reference_library/publications/archive_2008/ charitable_mus_gal.htm

Organisers of the annual Creative Clusters conference are looking for contributors for their next event, which will take place in November in Glasgow. Experts in business, government, the arts and academia are being invited to put forward proposals for contribution to the conference’s five themes: the Creative Economy in Smaller Nations, The Moving Image goes Online, Policies for Festivity, Leadership in the Creative Economy and The Long Story of Glasgow’s Creative Economy. The call for presentations is open until 12 May.
w: http://www.creativeclusters.com