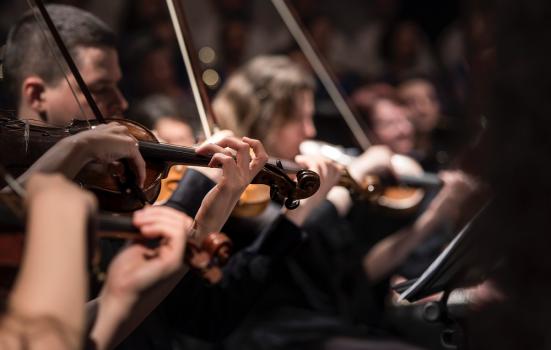 Gender stereotypes in GCSE entries across a swathe of arts subjects have been reinforced over the past five years, new analysis by ArtsProfessional has revealed.

The most striking trend is the emergence of a bigger gap between the numbers of boys and girls taking GCSE music. The proportions of male and female pupils taking the subject was similar in 2013/14, with 49% of entries in England from boys and 51% from girls. But by 2017/18, they were nine percentage points apart, with 56% of entries from girls and 45% from boys.

The Association of School and College Leaders (ASCL) has linked the findings to the narrowing of choice in school curriculums caused by educational performance measures like the English Baccalaureate (EBacc), saying: “if there are fewer subject choices available then pupils may tend to gravitate towards the choices their friends choose”.

The decline in the numbers of pupils taking arts subjects at GCSE has been widely seen as a consequence of the EBacc, the performance measure described by the Incorporated Society of Musicians as “deeply damaging” and detrimental to the take up of arts GCSEs.

This new analysis reveals that this trend is also creating and deepening traditional gender divides in subject choices. Music is one of several arts subjects from which boys are turning away at a faster rate than girls. Male and female entries for GCSE music were at similar levels five years ago, but male entries have fallen by more than 5,000 since then – a drop of a quarter (25%). Over the same period, the number of girls entering the subject has fallen by only 2,000 (9%), and by 2017/18, female entries outnumbered male entries by almost 4,000. 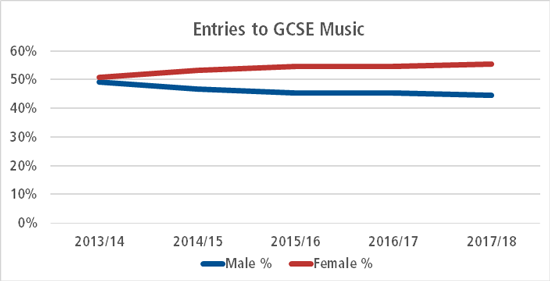 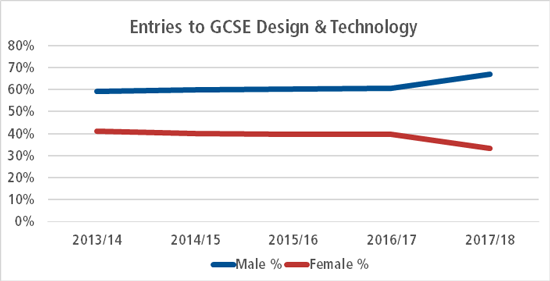 And in performing and expressive arts – which has experienced a massive decline among both genders – the gap between the proportions of girls and boys taking the subject has increased by 17 percentage points. The percentage of female entrants has risen from 84% of the cohort five years ago to 93% this year.

In contrast, the gender ratios in art and design GCSE have largely held firm. Girls continue to dominate entries for the subject, accounting for 66% of exam sittings in 2013/14 and 67% in 2017/18. The proportion of boys taking the subject in the last academic year was 33%, compared to 34% five years ago.

In most EBacc subjects there has also been little change over the past five years. The proportions of boys and girls taking physics, chemistry, biology and maths has remained steady, at about 50% for both genders.

The exceptions are English and computing. The proportion of boys taking English and English Literature has risen slightly, but the opposite has been seen with computing, where the proportion of female entries has risen from 15% to 20%, amid a huge increase of about 56,000 (340%) in the numbers of pupils taking the subject overall.

Suzanne O’Farrell, Curriculum and Assessment Specialist at the ASCL, said: “The number of GCSE entries to most creative arts subjects is in sharp decline because of school performance measures which favour traditional academic subjects, and funding pressures which are forcing schools to cut back on curriculum options. One of the advantages of having a broad curriculum is that it helps to break down gender stereotypes because pupils can select from a number of options.

“If there are fewer subject choices available then pupils may tend to gravitate towards the choices their friends choose. Whereas a boy may have previously taken design and technology and music, he may now only be able to select one subject and opts for design and technology, for example. This analysis provides cause for concern and we would welcome further research into this issue.”