Arts and museum attendance are higher predictors of Remain voting than arts participation and library usage, both of which are less associated with voting to stay in the European Union. 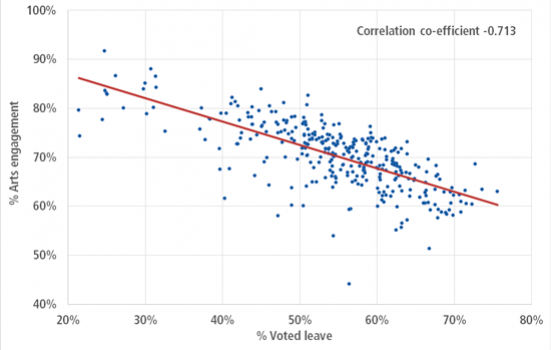 Correlation between arts engagement and Brexit voting across the country
Photo:

Higher rates of engagement with the arts are closely associated with a lower likelihood of voting for Brexit, new analysis by ArtsProfessional reveals.

The research, which compares government data on cultural engagement in English local authority areas with results from 2016's Brexit referendum, also highlights regional divides. There are higher levels of arts participation and Remain voting in the south of England, particularly in London, while the majority of areas where more people voted Brexit than engage in the arts are in the East of England or the Midlands.

The findings are based on data gathered in the most recent Active Lives survey, which reports on whether a person has attended an arts event, museum or gallery, or participated in an arts activity, in the past year.

The very highest concentrations of voters who were both pro-Remain and engaged in the arts are clustered in London. In Camden, 83% of the population are engaged with the arts, whilst just 25% voted for Brexit, and in Islington the proportions were 84% and 25%. The trend reached a peak in the City of London, where 92% engage with the arts and just 25% voted Leave. Among the ten areas with the largest positive gap between engaging with the arts and voting Leave, the only ones not in the capital were Cambridge (87% arts engagement, 26% voted Leave) and Oxford (84% arts engagement, 30% voted Leave).

In stark contrast, in 44 pro-Brexit areas the people were more likely to have voted Leave than engage in the arts. This trend was most pronounced in Sandwell – where the population was 15 percentage points more likely to have voted Brexit than to engage in the arts – followed by Boston, and Blackburn with Darwen, the least arts-engaged area in the country.

Of the ten local authority areas with the biggest gaps, only Thurrock is within 100 miles of the capital

Mark Taylor, a sociologist at the University of Sheffield, has carried out a more in-depth analysis of the data, exploring the relationship between voting Brexit and different types of cultural participation. His research reveals a “remarkably strong” correlation between high rates of museum attendance and high rates of voting Remain, and a slightly weaker correlation for other artforms. But the association between the two is markedly less strong in relation to participation in the arts and library usage. 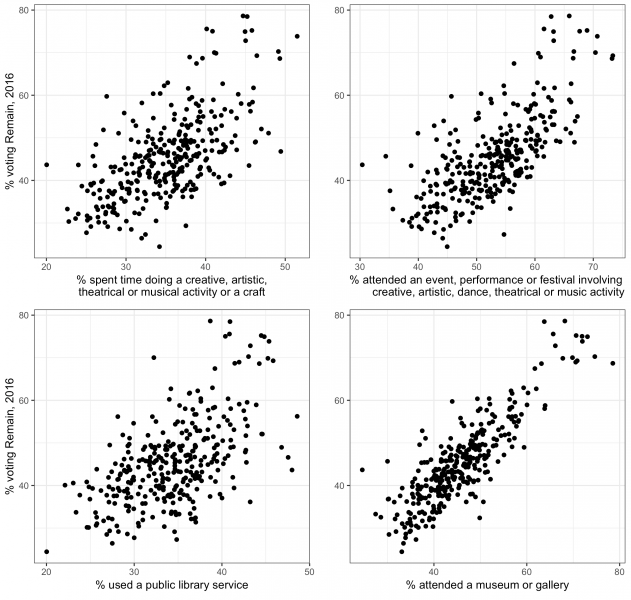 "The results are consistent with what we've seen before: the areas with higher engagement with the arts are areas where larger fractions of people voted Remain,” said Taylor.

"What's particularly interesting in this data is that the strength of this relationship varies a lot according to what we mean by ‘engagement with the arts’. There's a remarkably strong association between the percentage of people who reported going to museums and the percentage of people who voted to Remain in the EU in each local authority; the next strongest relationship is whether people attended events.

"Much less strong is the relationship between people participating in the arts (painting, playing a musical instrument, and so on) and voting to Remain.

"It's not just that there's a relationship between engagement in the arts and voting Remain at the area level: it looks like it's particularly about attending cultural institutions, which must come as a challenge to the institutions themselves,” Taylor added.

"Of course, institutions might correctly point out that just because areas with more people voting Remain are also areas with more people attending museums, it doesn't follow that people voting Remain are more likely to attend museums. However, other work by Tak Wing Chan and colleagues shows that there's a relationship at the individual level, as well as at the area level.”