The data will be used by Arts Council England to inform a £24m investment in new areas through its Creative People and Places programme. 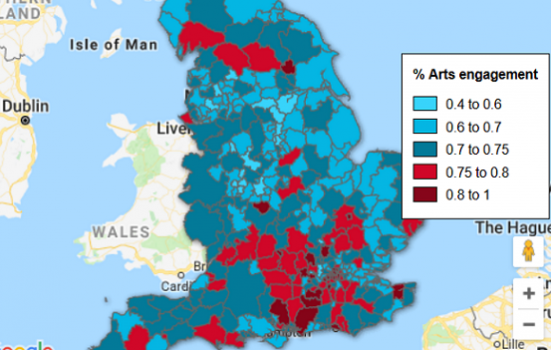 Scroll down for AP's interactive map of arts engagement across England.
Photo:

Government data has revealed local level information on arts attendance and participation across England’s 326 local authority areas for the first time since 2009/10.

It will be used by Arts Council England (ACE) to guide investment via is Creative People and Places programme, which supports arts activity in areas with historically low levels of cultural engagement.

The government-backed ‘Active Lives’ research, which built on a survey launched in 2005/06, found 70% of adults in England had attended an arts event, visited a museum or gallery, or spent time doing an arts activity during the past year.

Echoing previous research, it found people in the South East and London are the most engaged with the arts. But the data also reveals engagement is patchier in London than in any other region. It is home to the area with the highest rate of engagement – the City of London, where 92% engaged – and two of the areas with the lowest rate: Barking and Dagenham (55%) and Newham (58%).

Across England, the lowest rate of engagement was in Blackburn with Darwen, where 44% had attended an arts event, museum or gallery or participated in an arts activity in the past year. This is despite the North West, with average engagement of 67%, being statistically more engaged than four other regions.

The North East had the second lowest rate of arts engagement (66%), but it was the area with the most consistent level of engagement across its 12 local authority areas.

*The percentage that has attended an arts event, museum or gallery or participated in an arts activity in the past 12 months

The data reinforces other research, finding women are more engaged with the arts than men. 74% of women surveyed had either attended an arts event, museum or gallery, or spent time doing an arts activity in the past year, compared with 66% of men.

The lowest levels of engagement were recorded among people who identify as Asian (53%), Black (58%) and ‘other ethnic group’ (61%).

Undertaken as ACE works towards a new ten-year strategy, the research will be used to inform the funder’s future working, including Creative People and Places.

The programme was launched in 2012 and has so far invested over £50m in 21 projects focused in areas of low arts engagement. These projects have reached most of the ten areas highlighted by the new data as having the lowest levels of arts engagement.

ACE will launch a funding round for new Creative People and Places projects in early 2019.

The Active Lives survey was conducted by Ipsos MORI and led by Sport England in partnership with ACE, Public Health England and the Department for Transport. It collected data on arts engagement between November 2015 and May 2017 from around 500 adults in each of England’s 326 local authority areas.