BBC to reduce licence fee funding for its performing groups as part of efforts to make £200m a year in savings. 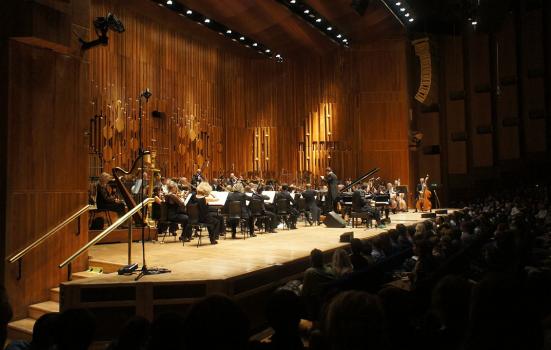 The BBC Symphony Orchestra performing at the Barbican
Photo:

Money allocated to BBC orchestras and performing groups from the licence fee will be cut due to savings requirements with alternative sources of income set to be explored, the broadcaster has announced.

In response to a government-imposed two-year freeze to the licence fee at £159, the BBC has set out its plans to save £200m a year, which will require "stopping things and running the organisation better".

Among a raft of cost-saving measures set out by BBC Director General Tim Davie, including moving television channel BBC Four and children's television online only, the budget for the broadcaster's performing groups will be reduced.

"While we will continue to play a vital role in classical music in this country, we must be realistic about the resources we use," Davie said.

"We will continue to support the classical music sector, invest in Radio 3 and improve our educational impact. However, we will look to reduce licence fee funding in our performing groups – preferably by looking for alternative sources of income where possible."

A job advert recently posted for the position of Head of BBC Orchestras and Choirs makes reference to the intended direction of travel.

Responsibilities for the role include "leading on further commercialisation and future funding of the ensembles, expanding external income".

Meanwhile, essential skills and experience required include "a keen sense of commercial and revenue generation possibilities".

Mark Pemberton, Chief Executive of the Association of British Orchestras, said he is concerned that the move could impact independent orchestras.

"At the moment around 13% of the income that BBC performing groups receive comes from ticket sales and other commercial activity and the idea is that they would increase that perhaps to around 20%," he said.

"On the face of it that's a fairly modest target to generate more money from external sources.

"It is a concern to other orchestras because there is a delicate balance between the fact we have the BBC orchestras funded by the licence fee and they are there to be part of public service broadcasting.

"Independent orchestras get some Arts Council funding but have to earn and fundraise the bulk of their income, so if the BBC has to increase its tickets sales and commercial income the indication is that it might compete more with the other orchestras.

"That is risky territory because, like all parts of the BBC there is a requirement not to compete in the commercial marketplace and to be distinctive. Whatever it does it needs to maintain those two primary objectives so we are looking a little nervously at what it might mean.

"There is only a finite market, so if they up their competitiveness in the marketplace inevitably it would mean taking it away from someone else."

Research commissioned by the BBC earlier this year, which was published last month, examining the classical music ecosystem includes a section which looks at how orchestras in other countries are funded.

It found that the majority of income for German orchestras comes from regional and local level government, while US orchestras depend to a large degree on private philanthropy and civic support.

According to the report, in Japan box office revenue plays a proportionately larger role in the financing of orchestras than in Germany or the US: "There are fewer orchestras in Japan than Germany and USA illustrating the constraints of an economic model dependent on box office income," it says.

The report also looks at the geographical spread of the locations of orchestra performance venues, finding that BBC orchestras currently perform in parts of the UK which otherwise would not be covered by major orchestras.

The published report, edited by the BBC, does not include the final section listed in the contents: "What next for classical music in the UK?"

The BBC has also announced that both BBC Four and children's television will become online only.

Amy Holdsworth, Head of Film and Television Studies at University of Glasgow's School of Culture and Creative Arts, said she is concerned the changes will reduce exposure to "accidential" consumption of different genres.

"Some people may say [scheduled channels] are a really old-fashioned way of consuming television but you can stumble upon something you wouldn't normally watch and the BBC has a universality to it, representing different voices and different kinds of stories," she said.

"When you are searching out content you tend to look for things you already know and like or that you want to see, rather than through serendipity or accidental viewing that you get through a scheduled experience.

"I feel that's a great loss for being exposed to different ideas, different forms, voices, or genres that you wouldn't necessarily watch."

She added that children could lose the community experience of watching scheduled programmes if online only coverage changes the way programmes are presented.

The bits between the programmes and the presenters - the on-air direct address, almost like older brothers or sisters - can be very important for children," she said.

"Children sending in birthday cards or artwork creates a community of viewers. They are all really important parts of the children's television culture.

"What happens to that really important part? For me that's quite worrying."

BBC Director General Tim Davie has said the corporation will be consulting on some proposals, adding that they represent a "clear direction of travel that we can incorporate into our plans and budgets".