The UK City of Culture competition brings great benefits – to the losers as well as the winners – but as more cities, towns and even villages express interest, Andrew Dixon asks if changes are needed. 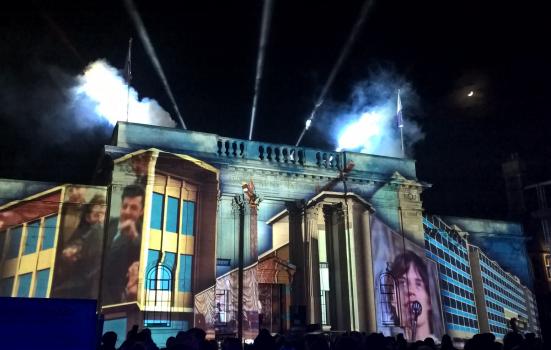 The DCMS and Liverpool’s Phil Redmond have a real success on their hands. Hull’s year in the spotlight and the energy generated by the 2021 bids has added further value to the UK City of Culture brand. Hull has been transformed by a joyous year of programming as its city council has used the title as a catalyst for new investment and regeneration.

From the day that over 3,400 people painted their bodies blue for Spencer Tunic’s ‘Sea of Hull’ it was obvious that the northern city would embrace the title with style and deserve its place on the weather map. The successes kept coming with Made in Hull, the Blade and Hull Truck’s collaboration with the RSC in the Hypocrite.

Rupert Creed’s oral history on Hull guitar hero Mick Ronson could have sold out ten times over in East Hull’s Freedom Centre. The current Humber Street Gallery exhibition is a powerful illustration of a ground-breaking volunteer programme that became part of the story. Set foot in this gallery and you can see and feel the confidence of a city that is no longer ‘on the edge’.

The rewards of bidding

It was the young and diverse team in Coventry that won the 2021 title but other ‘cities’ such as Sunderland, Stoke and Paisley have reaped major rewards from bidding. Paisley was put on the map by the inspirational leadership of locally born Jean Cameron hosting several national Scottish events and creating a new focus for Scotland’s largest town.

Sunderland is seeing a cultural renaissance with its new Fire Station Arts Centre and a citywide trust in place, managing a growing programme of cultural venues and events. Swansea and Perth will host the BBC Biggest Weekend alongside Coventry.

Previous bidder Norwich has become a UNESCO City of Literature while Dundee will be a UNESCO City of Design. NewcastleGateshead lost out to Liverpool in the 2008 EU competition but this year will host the Great Exhibition of the North on the back of two decades of cultural regeneration.

In Coventry the council leader George Duggins said that bidding for UK City of Culture “has brought the city together like never before,” with two universities, the cultural sector, community groups and over a hundred businesses rallying around a common cause. The potential for another whole-city transformation is already on track with new hotel investment and national partners lining up to be ‘sent to Coventry’.

The win has already opened doors with the BBC, British Council, Heritage Lottery and others keen to engage with a city that has been moving people for centuries by cycle, car and jet engine but is now moving people through culture. Coventry’s themes of ‘Being Human’ and ‘Reinvention’ provide rich material for programming for a catchment of over 40 million people within two hours. Underpinned by three years of research by the universities of Warwick and Coventry, the programme will tackle some of the deep inequalities in cultural provision across the UK.

A city that invented town twinning, community schools, theatre in education and the Green Party is now one of the UK’s most diverse communities with a population that is on average seven years younger than the rest of the UK. Its cathedral and creative influences such as Delia Derbyshire, Ira Aldridge, Graeae Theatre, George Eliot and Shakespeare will play a major part in the programme alongside a new generation of young artists.

The legacy team led by 29-year-old Laura McMillan is already in place and the work of Coventry’s Positive Youth Foundation offers an interesting new model of youth engagement.

In 2017 the Mayor of London launched the London Boroughs of Culture, a well-designed programme generating serious interest from more than 20 local authorities. The likes of Croydon, Camden and Lambeth could be the front-runners and many boroughs have produced strong visionary bids for the initial competition.

So what next for UK City of Culture? More than eight cities or places have already hinted at their plans to bid for 2025. The likes of Aberdeen, Bradford, Luton, Ipswich and Tees Valley may well be joined by smaller towns and villages. When the University of Hull reports on the social and economic impact of 2017 at a conference in March, there may be even more appetite for larger cities to bid, especially with no EU competition on the horizon.

The abrupt termination of the European Capital of Culture competition has been a blow for those cities that put significant effort into their bids. However, Dundee with its V&A launch in 2018 and Leeds with its plans for a six-year, £35m programme have both been effective in using the process as a platform to shout about their cultural assets and international connections.

Previously, the criteria for UK City of Culture have had to balance a need to deliver ‘step change’ in a city with the vision and ambition to produce a quality programme. The competition is set to continue but it may be time to review the timetable, criteria and focus to allow an even wider range of places to benefit from the process and journey of bidding.

It is hard to compare the compelling need of a major city like Bradford with a rural village such as St David’s in Wales. There may need to be an approach for 2025 that offers more than one winner and a longer timeline for submission. There will be opportunities for others, such as Stoke on Trent, to bid for UNESCO status and other programmes such as the excellent Great Places Scheme run by Heritage Lottery.

The key to successful bidding is good research, a strong vision, finding the distinctive voice and securing the right leadership to get the city or place working collaboratively. Coventry had all of these and looks forward to welcoming others to join in its journey.

Andrew Dixon is Director of Culture Creativity Place, an adviser to Coventry City of Culture Trust and joint visiting professor at the universities of Coventry and Warwick.
www.andrewdixon.org
www.coventry2021.co.uk