£20m to drive cultural regeneration in 16 areas across England

The pilot Great Place Scheme will be rolled out to Scotland, Wales and Northern Ireland later this year. 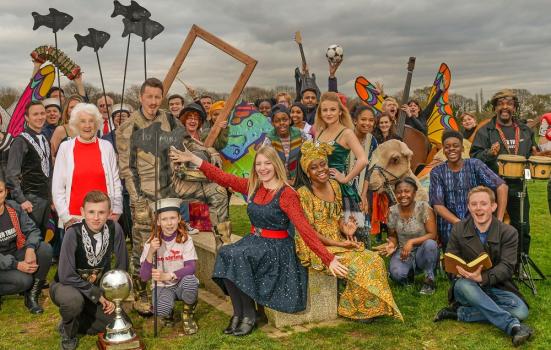 Funding was welcomed in Coventry, where officials are bidding for UK City of Culture 2021

Coventry, Great Yarmouth and Rotherham are among the areas set to benefit from a £20m investment in cultural regeneration across England.

The pilot Great Place Scheme has awarded three-year funding to 16 English towns, cities and regions, to encourage them to use culture and heritage to drive growth, improve residents’ health and wellbeing, and boost tourism.

The Heritage Lottery Fund (HLF) and Arts Council England have each put £10m of Lottery funds into the pilot – £2.5m more than was originally budgeted. The scheme, which was a flagship announcement of the Government’s Culture White Paper, is expected to be rolled out to Scotland, Wales and Northern Ireland this year.

“The Great Place Scheme is something new and really quite radical,” said HLF Chief Executive Ros Kerslake. “The aim is to bring together National Lottery investment and local ambition, to make a difference to people across entire communities.”

The scheme has two main objectives:

The successful applicants will use their grants of between £560k and £1.49m on a range of activities, including researching and developing local culture strategies, exploring ways of integrating the arts with education and health services, building networks, and testing new ways of financing the arts.

“This Great Place Scheme, funded by National Lottery players, will help areas across the country put culture at the heart of communities and celebrate their unique history, architecture and landscapes,” said Heritage Minister Tracey Crouch.

Some of the areas set to benefit are amongst England’s most deprived, including Barnsley and Rotherham, and Great Yarmouth and Lowestoft.

The funders are confident Barnsley and Rotherham have “the potential to become major visitor destinations and create economic growth and prosperity”. A £1.26m grant will be used to tackle social issues and increase cultural engagement amongst the communities that were hit hard by the decline in traditional industries.

Authorities in Lowestoft and Great Yarmouth want to bring about a ‘cultural reimagining’ of the two seaside towns. A £740k grant will be used to support the creation of a local cultural strategy, increase cultural education for children and young people, and to drive tourism and economic growth through the arts and heritage.

A £1.49m award was particularly warmly welcomed in Coventry, where officials are preparing to bid for the UK City of Culture title in 2021. Vanessa Harbar, Head of HLF West Midlands, said: “This is fantastic news for Coventry, a city currently reinventing itself through culture and regeneration, poised to realise its potential and embed arts and heritage as key drivers for economic growth, social integration and tourism.”

The bid was led by Coventry City of Culture Trust, building on a partnership between the local authority and higher education institutions, the Business Improvement District and over 75 local businesses.

The award will be used for a programme of cultural events, including a major new arts commission for Coventry Cathedral, and on the development of a new tourism strategy and website for the city.