What we've learned from car parks about boosting attendance 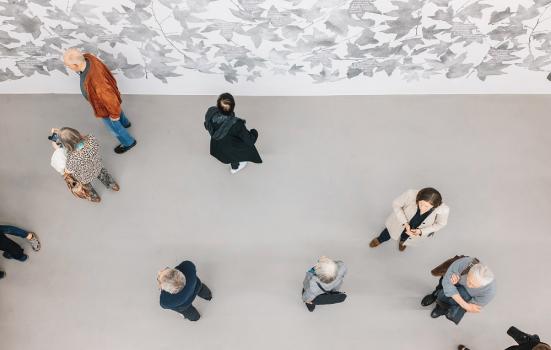 The Weserburg Museum für moderne Kunst is Bremen’s museum for contemporary art, displaying all forms of art production since the 1960s. With over 5,000 square meters of exhibition space, it is one of the larger institutions of its kind in Germany. We are a private entity, but rely on both public and private funding.

During the four weeks of advent in 2019 (including 24 opening days), instead of charging the usual day rate for admission (€9 or €5 for concessions) we linked the cost of entry to the time people spent at the museum. Visitors paid €1 per 10 minutes, but never more than the usual day rate, regardless of time spent. The price was charged at the exit, which is why we dubbed the model ‘pay as you stay’.

Why and how we did it

Like many museums, we usually offer a ticket that allows for an all day visit. And although our prices probably don’t keep the interested out, they may prohibit a short visit, or coming back for a second and third view, or a casual look inside from those who don’t know what to expect. These are all arguments for free admission, of course, but since we cannot afford to forfeit the ticket income, we started looking for alternatives. We found one in an academic article from 2010, in which the authors suggest applying per-use pricing (known from parking lots, pools, mobile phones etc.) to museums. To our knowledge, this had never been tested in practice, but the idea seemed like a possible solution to the downsides of day rate pricing.

After debating and modelling a few scenarios, the formula ‘€1 per 10 minutes’ was set. It’s a perfect fit, combining our regular price of €9 and the results of a past survey in which we found that visitors spend roughly 90 minutes at the venue. The regular price was set as the maximum price, even if someone stayed all day. This was very important as visitors easily understood they could only win with this model.

2.    Visitors would come more often
We used a visitor survey to ask a few questions both during and outside of the pricing experiment. We wanted to know under which circumstances people would visit the museum more often. During regular pricing days, the highest scoring answer was ‘if I had more time’. But during the ‘pay as you stay’ experiment, the answer ‘if the price were always €1 per 10 minutes’ outscored the lack of time argument by far.

3.    No rush
The obvious fear with this pricing model is that visitors could feel pressed for time. While the visitor survey showed that some 10% thought about the price during the visit, only 4% actually felt rushed. The average time spent at the museum decreased by 16 minutes, from 83 minutes during regular pricing days to 67 minutes during the experiment. When we take into account the fact that some visitors explicitly used the test for a short visit, pulling down the average, this supports the idea that the pricing model did not detract from the museum experience. We did not track how visitors spent their time at the museum – we trust they know best what’s right for them.

4.    High perception of price fairness
Three out of four visitors said in the survey that the model created fair prices: this seems to be due to the individual’s ability to influence their price directly. In this respect, ‘pay as you stay’ has similarities to participative pricing models such as ‘pay what you decide’.

5.    High willingness to recommend a visit
In the visitor survey, we tracked the Net Promoter Score (NPS), which indicates people’s willingness to recommend a visit to friends and family. During the ‘pay as you stay’ test phase, the NPS was on average 7.8 points out of 10 – almost a full point higher than during regular pricing days. Both in the survey and at the ticket counter we got a lot of positive feedback from visitors. Many appreciated the experiment, enjoyed its playfulness, and liked the way they had control over the price without losing anything compared to regular pricing.

Applying the theoretical idea of ‘pay as you stay’ to the practical reality of the museum created positive results and satisfied visitors – not to mention a lot of media attention. The first test was based on a rather small sample and advent might be representative of all times of year. So in order to get a better understanding of the effects, we will run another test in March. One thing is for sure: trying something new did not hurt.

What we've learned from car parks about boosting attendance