How can arts and culture reach a broader audience that more accurately reflects local communities? Sarah Boiling explores how to change the pattern of who engages with the arts. 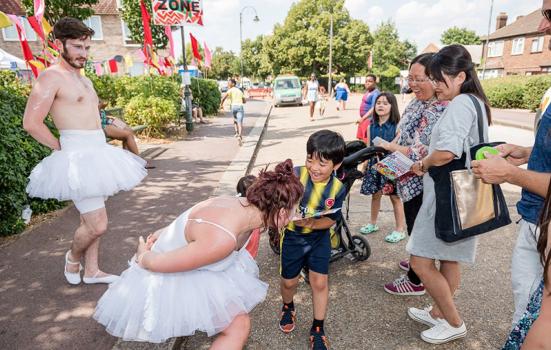 “It’s not somebody coming in to tell us we’re so uneducated we need to draw pictures!” – the words of a Made in Corby participant. Yes, that old chestnut again. Seems we’ve still not cracked it. Yes, there are some individual organisations doing great work, and yes there have been some well considered funding initiatives, but the overall pattern of who engages with arts and culture in England is still stubbornly stuck.

Think about the optimum time for audiences, not for organisers

But it does seem that things are changing, in one part of the sector at least. Creative People and Places (CPP), the action research programme funded by Arts Council England (ACE), that aims to increase arts participation in places where people are less likely to take part in arts activity, has turned the usual pattern of arts engagement on its head.

As the graph below demonstrates, the Audience Spectrum groups least likely to engage with the arts overall are the most likely to be found among CPP audiences. 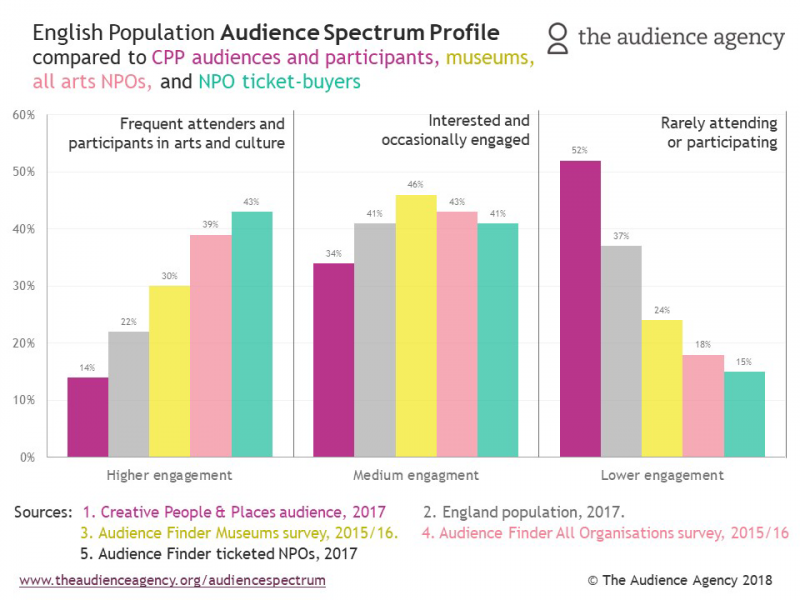 So, how have the 21 places that make up the CPP network managed to do this? Earlier this year, Clare Thurman and I were commissioned to analyse approaches to audience engagement across the CPP network to try to understand what was going on behind the numbers. The report is structured around principles, practice and programming, and we identified 25 factors that appear to be making the difference.

For our research we interviewed a senior member of the team at each CPP place. It was important to us that we also listened to real people from local communities so we also held three audience voice sessions at Made in Corby, LeftCoast in Blackpool and Ideas Test in Sittingbourne.

So, what did we discover? The bad news is: nothing new, and no magic. The good news is: lots of transferable practice and principles, that are also themes reflected in ACE’s Ten Year Strategy consultation. Here are a few of the themes we think are most powerful and transferable.

One of the strongest things that struck us was how many people leading these programmes have an authentic belief in social justice, democracy and building social and cultural capital. We anticipated hearing about the ‘what’ and ‘how’ of audience engagement, but we didn’t expect to hear quite so much about the ‘why’.

Interviewees talked passionately about empathy, listening, sharing power, trust, transparency, honesty and patience. Many rejected the deficit model that suggests that communities are lacking in some way that arts and culture can solve, while others were acutely aware of their responsibility in places that have suffered decades of disinvestment and neglect.

Much has already been written about shared decision-making and sharing power in the CPP network – both practically and philosophically – and this was a key theme in our discussions. Collaborative decision-making and sharing power with communities (ranging from supper clubs to programming poker, and from local arts groups to commissioning panels) was mentioned time and time again as a critical success factor in our interviews.

We heard a lot about relationship-building approaches that were long term, face to face and proactive, that involve meeting people on their patch, not yours, and extending a genuine invitation to get involved. Residents involved in LeftCoast in Blackpool described this approach brilliantly:

“Cath was two days a week at the children’s centre, and all of us individually go in there and she started talking to all of us individually and then getting us to go to different events…Yeah, she’s amazing…Cath hollers and you go…She’s got the gift of the gab…She can work with all ages…She’s really, really good…She is on a level with anyone from all different walks of life…It doesn’t matter who you are…She’s got no airs and graces…She’s adaptable…And she’s a people person…She just gave all of us confidence to believe…She opens you up to experiences that you never even considered were things you wanted to do.”

Leaders we spoke to acknowledged that this approach certainly isn’t quick and not always easy, but they were convinced it is worth the investment.

Facilitating networks, ambassadors and community connectors is one of the most talked about aspects of CPP, and these activities were cited by many people as an essential ingredient in their approach. Key to this is finding the right people to work with - who might not be the official gatekeepers of a particular community, but are more likely to be trusted and enthusiastic informal networkers. As one CPP director put it: “Hairdressers, not community centres.”

We were reminded in our conversations about some simple practical things that can make a big difference to engagement. Programming that is regular (and frequent if possible), and follows a consistent pattern of timing makes it easy for people to get into the habit of attending.

Think about the optimum time for audiences, not for organisers. For example, in one CPP place the workshops for older people are scheduled around the bus timetable. Programme in non-arts places and spaces that are familiar and trusted environments. And make it affordable and easy to buy tickets – one CPP sells tickets from a pub, working men’s club and a shopping centre.

A number of CPP teams commented that they often had to translate information provided by companies and artists into words that are more relevant and understandable. Using clear and simple language that focuses on the experience and what to expect is the most effective way to promote their events and reduce perceived risks and uncertainty among audiences.

Many interviewees mentioned not using arty language, and one commented: “We have a list of banned words – rarely mention ‘art’, don’t use ‘installation’ or ‘immersive’ or ‘commission’ – we learned the hard way.” This was echoed by audiences we spoke to: “If you look at the leaflets, they’re all quite arty farty... and you think coming from a council estate they’re just not going to be things that council estate people do.”

How to sum it up? In the immortal words of Aretha Franklin, it’s about R-E-S-P-E-C-T.

This article, sponsored and contributed by Creative People and Places, is part of a series exploring ways in which we can all embed inclusive engagement practices in our work.