Everyone welcome – of all faiths and none

Staff and museum users from Manchester Museums and Galleries Partnership challenge Tristram Hunt’s definition of what it means to be “consciously civic”. 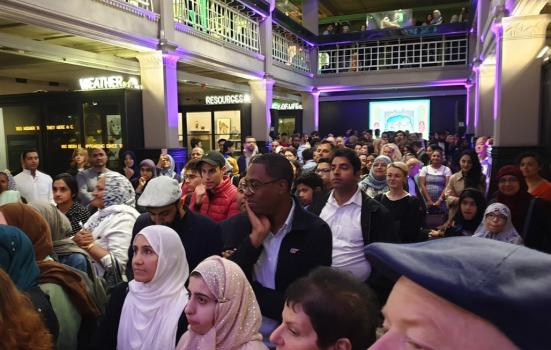 Earlier this year at an event on the civic role of arts organisations, ArtsProfessional reported that Tristram Hunt, Director of the Victoria and Albert Museum (V&A) had publicly expressed a lack of interest in providing space for prayer within the V&A’s buildings. He explained that “…you also want a space which is consciously civic… because we live in a discourse where notions of being offended by culture and being offended by imagery is so prevalent, you want to hold the ring quite firmly about the civic function of an organisation.” This prompted us to reflect on our own attitudes towards prayer and the civic role of museums.

Institutions like the V&A were borne of civic spirit, ambition and purpose at the height of colonial rule. At Manchester Museums and Galleries Partnership (comprised of Manchester Art Gallery, Manchester Museum and the Whitworth art gallery) we’re grappling with the ways in which the content of our collections has arisen from the entanglement of culture, politics, ritual and faith, and what that means today. For us, to be “consciously civic” is about being interested in and caring about what is going on in your community and having an active role in making your city. In one of the UK’s most multi-lingual, hyper-diverse cities, we are building on a collaboration between city council and university, developing new ways to create more open and inclusive museums.

Our visitors and staff come from many faiths and prayer forms an important and integral part of many people’s daily lives. For some, the act of prayer is a priority, and a ritual that needs to be performed at set times of the day for the prayer to be valid. We need to unpack the notion that public shows of religiosity are not the way we do things and to call out the hypocrisy of the Eurocentric lens, where on the one hand nuns in habits are rightly respected, while women in hijab are mocked or caricatured. Increasingly, young people are confidently embracing and proclaiming their religious identity. In multicultural, multi-faith societies there should be respect and even admiration for the varied ways that people of all faiths and none take time out to pause, reflect, pray, meditate. This is especially important in our museums, where we deal with some painful colonial histories and memories.

Iftar at the Museum

If we want a deeper sense of emotional and communal engagement, belonging and ownership for everyone, we have to create the conditions that enable and encourage that. The former Director’s office at the Whitworth art gallery has recently been transformed into a quiet room for prayer and reflection. And when Manchester Museum fully reopens in late 2021 it will have a newly commissioned and specially built multi-faith prayer room. Earlier this year, the museum also held its first ever Iftar – the evening meal with which Muslims break their Ramadan fast – open to all faiths and none. This was in partnership with the University of Manchester Muslim Chaplain, a fantastic local restaurant (which provided the food) and the charity Human Relief Foundation, which provided the dates that we broke the fast with. With half the museum currently closed, it was some logistical challenge. Originally we’d planned for 200 people –  but we quickly doubled the food order as the word spread.

In the spirit of Ramadan, the month of hospitality and sharing, over 400 people gathered for an evening of food, friendship and dialogue across faiths and cultures. The call to prayer and prayers in congregation were performed in the heart of the museum. Many museum staff had never been to an Iftar, while others are practising Muslims. We’re learning how to do this – together.

“Now I know I am safe here and belong,” visitors told us, “it means so much that you’ve done this”. We were thanked for refusing to bow to Islamophobia and told it was “very brave, a great display of cultural intelligence”. We had only two negative responses. One, via Twitter, asked “FFS what are you doing?” to which we replied: “Hosting an Iftar. You’re welcome”. And a comment on the night asked: “Is there really a need for all public spaces to engage in this multi-faith idealism?” We responded that we are in Manchester and this is multi-faith reality, not idealism. We live in a global society, and throughout the world, prayer spaces are regular features of workplaces, malls, schools, airports, cultural institutions, restaurants and more.

For some years now across the museums partnership, we’ve been working with South Asian diaspora communities.  Manchester Museum’s forthcoming South Asia Gallery is being co-curated with a 50-strong collective, and the Whitworth’s ‘Four Corners of Cloth: Textiles from the Islamic World’ exhibition left two display cases empty for members of local Islamic communities to bring and share their objects to develop the story of the Islamic world today. Bringing lived experience, and new forms of expertise, perspectives and people into the museums is changing how we do things.

A culture of care

This is about more than bricks and mortar. It’s about the future of civic institutions and care. Museums are not, and have never been, neutral. In caring for the past, we are staking a claim on what matters in the future. The word ‘curator’, after all, is derived from a word meaning ‘to care for’. At its best, this care extends beyond objects: to people, ideas, faith and relationships.

This ambition is driving our programming as well as shaping our buildings. Manchester Art Gallery’s recent ‘School of Integration’ (a new commission initiated by international artist and activist Tania Bruguera in partnership with Manchester International Festival) asked what would happen if the integration of immigrants was not just based on the required one-way absorption of a new culture, but offered opportunities for both immigrants and established nationals to meet each other and grow together in their complexities and difference. Over 80 free, open participation lessons were initiated, planned and taught by Mancunian immigrants who expertly shared their skills and knowledge as ‘teachers’.

The Victorian vision of museums as engines of civic engagement is arguably more necessary and relevant than ever, but the world has changed. Today in Manchester, the civic mission seeks to build a culture of creativity, inclusion and care. Everyone is welcome, of all faiths and none.

This response was collated and written by a cross-section of staff and museum users from Manchester Museums and Galleries Partnership.