Performing arts students from working class backgrounds face considerable barriers to entering the theatre profession. Andrew Muir has set up a programme to address this. 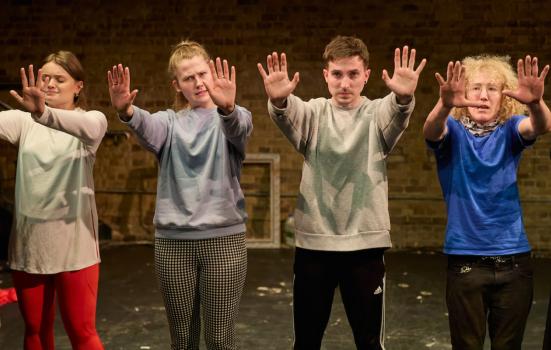 Ardent Theatre Company was created to provide a working environment for artists in which no one feels like an outsider. We produce theatre that speaks about the world we live in, enabling us to have a voice within the mainstream theatre scene as well as engaging audiences on a grassroots level. Our policy is to make all our work affordable through low ticket prices and concessions.

Our latest production, Rethink, ran for a week at the Union Theatre. It was based on the gut-wrenching Government-backed poster campaign featuring a ballerina called Fatima with the slogan ‘her next job could be in cyber’ and involved members of our artistic development programme - Ardent8.

Ardent8 supports emerging young actors from outside London who face financial barriers to pursuing their careers. Often the most talented actors will have given up before they’ve realised their full potential because they’re unable to access cities that provide greater employment and development opportunities. From the audience’s reaction to Ardent8, all making their professional London debuts, it was clear they were the best people to share this story.

Barriers preventing graduates from achieving their full potential are higher and wider in the arts than in many other professions. Having worked as a part-time lecturer and writer-in-residence at Bournemouth & Poole College of Higher Education for the past decade, the barrier for most of the students is financial. Most of the students have chosen this college because they can live at home during their studies and work part-time when not on campus.

On graduation, despite their talent and obvious potential, the route out of Dorset can often feel impossible. There is no relative with a spare room in London, or savings pot, there is only a £60 return train fare. Not that London is the only land of opportunity, but it probably offers more than other cities of fringe venues and scratch nights and all the kinds of venues where most of us worked at the start of our careers.

But it’s not just money holding these graduates back, it’s also geography. There are very few professional opportunities in and around Dorset so if you want to stand a chance, you need to move further afield.

So, my Co-Director Mark Sands and I set up Ardent8 to provide an opportunity for recent graduates to stay in touch with the industry. We invite them to London for ten industry led workshops, followed by a two-week residency, to work on a new play which is performed at a London venue.

We presented Sacrifice at Soho Theatre in 2018, and Rethink at the Union Theatre in Southwark this year. The programme never came with promises of fame and fortune, but rather it was an equal opportunity for those that otherwise might not have been able to afford it.

Our Ardent8 also met and worked with directors and casting directors and even secured Equity contracts. But at the end the question is always: ‘what happens next?’ And the answer, ‘who knows?’ Our promise to those on the programme is to provide an opportunity to break through the barrier that so often refuses to budge.

From personal experience, I recognise the financial barriers only too well. But in the days when I went to drama school, the local authority paid our fees. We were also entitled to a maintenance grant with no expectation of repayment. After graduation, signing on the dole gave you time to attend auditions and interviews without fear of losing your job. There wasn’t huge support for the jobbing actor, but it was just a little easier.

Despite class being less relevant in the UK today, there’s no doubt it still plays a part, often in terms of how people see their own social position. But for many graduates from working class backgrounds, it is the financial barriers that are paramount. It is simply not fair that only the financially privileged ever really stand a chance. They can afford to stay keep trying. But for many they can only afford one chance, and if that fails, they might never get a second go.

There needs to be more financial support for graduates already choking on their own student debt. A buffer. Cheaper train tickets perhaps, or auditions held across the country, not just in London. And regional theatres could be encouraged to support local graduates with employment schemes paying Equity rates. In short, we must do more to support performing arts graduates from working class backgrounds.

The Ardent8 programme is a small step towards building a fairer system for the disadvantaged starting out. It raises awareness of the problem and actively demonstrates that untapped talent is going to waste before it’s even had a chance to breathe. These young people have trained hard for a profession they know is not easy, but there is a chance. Allow them that chance. And don’t ever tell them to retrain. It’s cruel, and right now, the world is cruel enough.

Andrew Muir is Co-Director (with Mark Sands) of Ardent Theatre Company and writer of Rethink.