Head to head: can a toolkit solve the sector’s class problem?

This year Jerwood Arts published a toolkit for cultural organisations, designed to encourage greater socio-economic diversity in the arts. Julie Lomax, Chief Executive of a-n The Artists Information Company, sees it as a starting point for helping solve the sector’s ‘class crisis’ – but arts consultant Chrissie Tiller isn’t so sure. 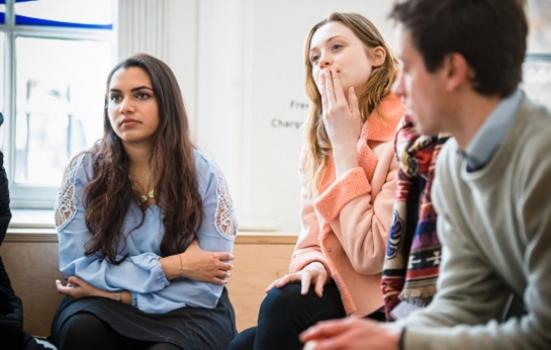 Julie Lomax:     When I was working at Liverpool Biennial we were approached as a potential partner for Weston Jerwood Creative Bursaries. I was sceptical at first about yet another scheme, but we decided to host a bursary. I was involved throughout, hosting a person and then keeping in touch with and working with them following the placement. So I’ve been on that journey and seen the impact.

When I worked at Arts Council England (ACE), we produced an Equality Action Plan for ACE’s funded portfolio, that included targets and metrics. And that eventually led to the Creative Case for Diversity. It feels the toolkit is a starting point in a similar way. And it’s very important to have that.

If you want to make theatre, you need money. Otherwise there is no safety net

Chrissie Tiller:     For me, it’s not a starting point – or it shouldn’t be. I feel we’re repeating things that have been said many times before. In 1958, Raymond Williams argued that ‘Culture is Ordinary’. And in 2019, we’re still saying ‘let’s take a look at the working class’.

The toolkit seems to take a deficit approach. It asks young people to talk about their challenges. If the people asking the questions don’t know about their challenges, it’s as if they haven’t read things like Tara Yosso on cultural capital, or tried to understand what Raymond Williams and Pierre Bourdieu were saying about culture. It would be different if they were asking about people’s experiences. But it’s this distancing approach, where people need to tick boxes about whether they had free school meals.

I’m a product of post war policies about access to higher education and training in the arts. I’ve been writing about these issues for 40 years. I know no one at my level in the arts who comes from a similar working class background.

JL:     I went to a non fee-paying grammar school and then went to Rochdale College of Art and Chelsea College of Art. I could do that because at each point there was support. I had free school meals, free uniform, free sports equipment and a full grant. In that situation today, I don’t know how I would afford to go to art school. I’ve been lucky to work with inspirational women from working class backgrounds in the arts – but you’re right, they’re few and far between.

CT:     It’s great to read about the experiences of young people in the Jerwood scheme. But where is the systemic change we need? Why haven’t we brought that about in all the years since you and I had those advantages? Let’s stop funding the major organisations in London with 60% of what’s available from ACE. Let’s really begin to think, who buys the lottery tickets? Should more money be going to those places? And let’s respect that the working classes have culture of their own, and different knowledges, values and skills.

Often the sector gives working class people a little access to support roles. But who is making the art and the theatre? This isn’t talked about in the toolkit. If anything was asked of those young people, I’d prefer if they’d been asked ‘what has been amazing about growing up as a working class person?’. I’m sure it’s given you lots. It’s certainly given me lots, and continues to do so.

JL:     Your point about who is doing the making is really important. One of the first works that I saw that reflected my experience was Mark Leckey’s video installation ‘Fiorucci made me Hardcore’ [a compilation of footage from underground clubs]. It was the first time I’d seen part of my culture in an artwork, and that was really powerful.

But I think it is really useful that the toolkit asks for metrics. It will probably tell us something we already know, but that’s evidence to support change. We’ve started using the measurement questions at a-n, and we’ve had good feedback on them from interview candidates and programme participants.

If you’re going to create systemic change, measuring and having a starting point is good

CT:     I was talking to some young women recently. They didn’t feel that a lot of young people would get beyond the first question of the toolkit because it talks about parental occupations in a very old-fashioned way. The reality is that a lot of people are on zero hours contracts doing bits and bobs of all sorts of things.

It’s really encouraging to see challenges to our system through things like the Movement for Cultural Democracy. But when these conversations happen among cultural organisations, it’s always between people – normally young women – from participation and learning departments at smaller institutions. There are hardly any men or people from big institutions in the room. Why not?

JL:     Before the toolkit was launched, I shared it with my team and we had a really great discussion. There have been a lot of diversity schemes – although often relating to cultural diversity rather than socio-economic background. We talked about how a lot of these schemes try to gentrify people. There’s this idea that ‘we will welcome you into our organisation and then we’ll teach you how to be like us’, rather than thinking about what a person can bring to the organisation. The scheme at Liverpool Biennial was great because it was run by a working class person and there was a supportive culture. We actively supported people through networks and contacts – how you navigate through that world, what you need to know – because we’d already experienced those challenges.

CT:     When I was at the National Theatre, we ran surveys of people ten years after theatre school. Most people who had not come from secure middle class families, or didn’t have a partner with a very secure income, were not doing it any more ten years along. Because if you want to make theatre, you need money. Otherwise there is no safety net and you have that constant precarity.

I’d like to see something that really begins to challenge who gets the funding. Where does it go and what kind of organisations are constantly supported? We need to challenge ourselves on whether we want cultural democracy, or some kind of democratisation of what we’ve already got, making it a little bit nicer for some working class people.

I’d really like people in the arts to understand things like cultural hegemony. I’d like them to read Gramsci and understand cultural capital. Ever since the Keynesian idea of making ordinary people better by giving them some art, there’s a bit of amateurism around this. There is a lot of learning to be done. I’d rather people go and read some of these books than have a toolkit.

JL:     I take a very different point of view. If you’re going to create systemic change, measuring and having a starting point is good. The next step is to have people who can advocate. We need voices and leadership. I’m very conscious that I’ve got to the position I’m in by manoeuvring and ‘shape shifting’ my way through.

I believe in giving something back. I’m a doer, so I’m just going to get on with it. That might be a working class trait. I’ve worked with and overseen schemes that have made a real difference. The toolkit can help more of this happen through things like advice on creating an inclusive organisational culture. It also talks about unofficial patronage and informal sponsorship. I’ve seen a lot of that over the years. Now I try to use it in reverse to support people from less advantaged backgrounds. I remember some Arts Council research that found one of the reasons people weren’t getting jobs in museums and galleries was they literally didn’t know what qualifications they needed to have. That lack of knowledge can be a big barrier. So I try to be very practical. Where I can influence change, I will try to make that change.

CT:     I’d question whether what we need is leadership. I think we need more support for co-operatives and collaborative models. Things like Common Wealth theatre, and ANU productions in Ireland. Flat structures that create different possibilities. So it’s not about having to get into this world that is somehow different, but that you’re actually being supported to work in the way you would want to work and people are supported to work together.

I don’t think organisations are suddenly going to change or have different leaders. The whole system is steeped in inequality and we have to take a totally different approach. Places like Contact in Manchester, London’s Battersea Arts Centre and Heart of Glass in St Helens are really embedded in their communities. They employ flat teams that are representative of class, disability, gender and age. I’d rather we tried to understand how those models work than bring people into the already existing models. Let’s change the big things, alongside supporting individuals.

JL:     Of course there are those big structures. But people like me can infiltrate those structures and change them from the inside. Drawing attention to how we get in – which is very difficult – is a good start.

CT:     It has got us talking, so maybe it was needed. But I don’t like the toolkit itself, and in many ways I don’t think it is the most useful thing. One interesting finding from the 2018 Panic! report was how many people in the arts still believe very strongly in meritocracy. They don’t see their own privilege. You do not succeed just through merit, you do it through all those invisible supports.

While the structure stays the same, those invisible things will continue to rule who gets the work and who makes the work.

JL:     I’m perhaps not in the policy change headspace that you’re in, because I’m focused on day to day concerns with my organisation. But I think it definitely needs both approaches.

Chrissie Tiller is a Creative Consultant and Practitioner.
chrissietiller.com

Head to head: can a toolkit solve the sector’s class problem?