Changing the narrative in East Leeds

It’s been five years since Heads Together opened Chapel FM in East Leeds. Linda Strudwick looks at what can be achieved from running an arts centre in the middle of a disadvantaged community. 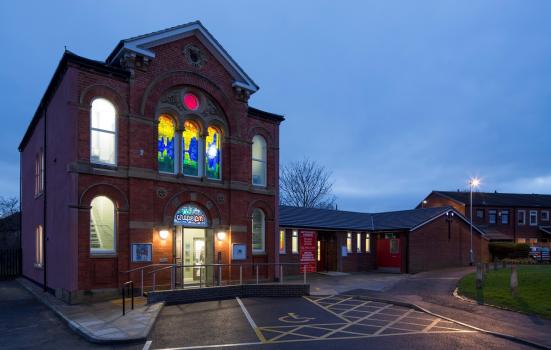 Following a history of physical theatre and performance that stretches back to the early 80s, Heads Together Productions emerged in 1998. These were the golden years in the late 1990s and early 2000s, when government was investing in creativity and the arts across the country. As an organisation we rode that wave and believed anything was possible if communities just had the resources to do it.

Since 1998, Heads Together has worked in the many neighbourhoods that make up East Leeds. Our work has covered many artforms. We have been listening to issues that are raised and responding with a co-designed approach.

A place to call home

We spent sixteen years working peripatetically around different communities before we opened the area’s first and only arts centre by converting a derelict Methodist Chapel on ‘neutral’ ground in the heart of the community to become Chapel FM Arts Centre.

To hold all this together, the organisation needs a strong mission and purpose. Our Theory of Change, reviewed regularly with all staff and Trustees, states: “We want East Leeds to be a community that has pride, vision and hope for the future. And Chapel FM to be a community arts centre for East Leeds where people welcome and share new ideas and work together creatively to take on the challenges of the area and make things happen.”

‘Art’ is not the opening and main focus. This is a reflection of Heads Together’s roots in a community arts tradition; a history that recognises that the transition from community arts to ‘participatory arts’ is more than just a name change. As François Matarasso points out, it is a signal of the transition from politicised, collective art to de-politicised individual-based consumer arts. Today there is an attempt to adopt ‘social arts’ as the banner we should all march with. This seems an even more diluted version of participatory arts, and one that people on our local housing estate would not understand. Heads Together still holds on to the ambition that political change can be achieved through creative local action.

Over the first three years after opening there was a 78% increase in visits. Over two-thirds (68%) of those visitors came from local postcodes, while visitors from across Leeds were attracted to the area for the first time as audiences at our live performances and events.

Our two-year research project carried out by independent evaluators reported: “Attitudes towards East Leeds among the young people [attending activities] range from pride, to acceptance, to defensiveness to embarrassment. They do not necessarily see it as their ‘community’, but Chapel FM gives them something to be proud of locally. It has the potential to change the narrative about the area.”

In the year we opened, Elliott arrived with a support worker from mental health charity, Mind. In his early 20s, Elliott was not working due to extreme anxiety and he rarely left the house. Elliott signed up to Find Your Frequency, a 50 hour course for participants to develop their confidence through exploring a topic of interest, around which they then make a radio programme. Fast forward four years and Elliott is now a key member of staff, responsible for all technical aspects of broadcasting. You will often see Elliott introducing performances to our live audiences and our digital audiences through live streaming!

Like many others that engage in Chapel FM, Elliott is from the immediate community – an area statistically among the 3% most deprived in the country. So what makes a young person from a poor council estate walk through the front door of a shiny new arts centre?

First of all, there is a lot of outreach work to do. Don’t expect people to come to you if you don’t go to them. But once they do, it’s important that both young people and adults see Elliott and other staff that they recognise as being ‘like them’ – role models from the community. It’s also important that, as an arts organisation, we are still there twenty years after we started. So many disadvantaged areas are targeted with ‘initiatives’ that come and go, leaving residents wary and untrusting of offers, however good they are.

But creativity and arts are vitally important in this age of austerity and climate breakdown. And there has to be a recognition of the importance of deeply rooted, venue-based arts activity in places of real disadvantage. Cultural democracy is not just about segmenting people into categories and then ticking boxes. We need different ways of looking at diversity, which are inclusive and not about seperateness. Funders often promote exclusive approaches to diversity – everyone has their own ‘club’. Chapel FM is ‘messy’. We mix up the categories, leaving space for alliances to be made between the different groups: creativity with purpose.

And five years on? Well Chapel FM is currently working at its limits, with 18,000 visitors a year. Its success has meant that we recently aquired the building next door, and are about to enter Phase 2 building work, which will extend the premises to cope with the demand in the area. We will continue to listen to and respond to what our community needs to achieve vision and hope for the future.

Linda Strudwick is Co-Founder of Heads Together Productions and a freelance fundraiser.

Changing the narrative in East Leeds