Getting granny into Gormley

Is it worth explaining conceptual contemporary art to ‘old age’ pensioners? Anna Goulding’s research suggests it might be. 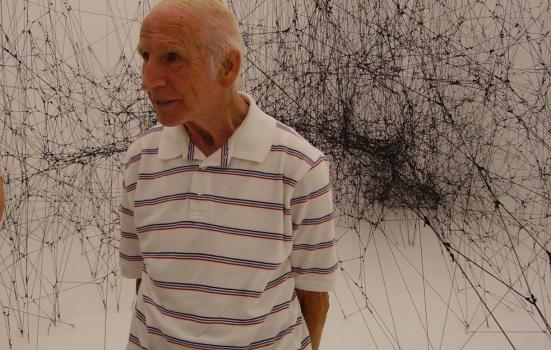 While there has been research on the social and individual benefits of engagement with the arts, there is little that attempts to explain the mechanisms through which that benefit develops and is sustained. My research has focused on the impact of gallery educational programmes upon the development of participants’ knowledge and understanding, self-confidence and sense of identity.

We looked at older people because, while those in the 55 to 64 age group are among the most engaged in the UK, the engagement of those over 64 decreases markedly (Keaney and Oskala’s research) as barriers to engagement take more effect. Using a qualitative approach we explored the experiences of older people who were currently engaged with contemporary visual art and those who were not.

Older people who already engaged with established cultural institutions regarded attending exhibitions as a way of learning and keeping mentally stimulated, and they related this to maintaining wellbeing

A total of 56 older people were recruited into seven groups. The participants had various levels of engagement with the arts. Participants who had not engaged with official cultural institutions were drawn from groups identified as having lower rates of engagement with galleries (by Keaney and Oskala). These included men, those with a limiting disability, those suffering from illness, people from minority ethnic backgrounds, those in lower socio-economic groups and people living alone. Engaged participants were drawn from a cinema club, a writers’ group and an advocacy organisation for older people.

A number of the older people introduced to contemporary art through the research project developed an increase in knowledge and understanding of it after only three visits. Some participants looked up artists in their spare time and continued to visit art galleries after the project had finished. Initially, participants used the art works to reminisce about their own lives, but by the third visit they were discussing the artist’s intentions, formal qualities present in the work such as symbolism, the way exhibitions were curated and the way other visitors seemed to be responding.

Older people who already engaged with established cultural institutions regarded attending exhibitions as a way of learning and keeping mentally stimulated, and they related this to maintaining wellbeing. Visiting art galleries was one of a range of activities they participated in with the aim of remaining mentally and physically active as they aged.

Psychosocial barriers to participation included a perception that art galleries were run by an elite. Complicated language on interpretation panels made some participants feel that they were not intelligent enough to understand the art. Both engaged and non-engaged participants expressed feelings of not being intelligent enough to understand conceptual art. Being given a tour by an education officer or curator was cited as an effective and enjoyable way of addressing this problem and accessing the art.

Participants found discussing the art in the post-visit focus group one of the most enjoyable and stimulating aspects of the visits. Even if participants did not like the art, they enjoyed talking about the works. Artworks which proved controversial provided stimulus for debates around contemporary issues. For example, some prayer mats made in Pakistan, commemorating the terrorist attacks of 9/11 (curated by the photographer Martin Parr as part of Parrworld), provoked a discussion about motivations behind religiously motivated hatred. Participants noted that engaging in such debates made them feel as though they were actively contributing to society.

The participants created meanings through the encounters with contemporary visual art that they used for identity maintenance and revision purposes. This could aid transitions in later life such as bereavement, moving into sheltered accommodation and adjusting to declines in health.

Participants used the art to reminisce as part of a group, which developed bonding relationships with other participants. The art also prompted discussions about important life events, such as the Second World War, the miners’ strikes in the 1970s and 1980s, and returning to education after having raised children. Those who did not have the cultural capital to decode the artworks often created meanings that related to existing identities. Memories were prompted and links to personal histories were made which provided a sense of continuity over time. For some, the memories played a role in the creation and performance of present day identities.

I believe that research like this has a practical application and can feed into contemporary gallery education practice, providing more meaningful experiences for participants.

Anna Goulding is a Research Associate at the School of Arts and Cultures, Newcastle University.
www.ncl.ac.uk/sacs/

Anna’s work is interesting in that it starts to explain the benefits of cultural engagement beyond the immediate value of the art experience in itself. Much of the evidence on CultureCase.org supports the idea that cultural engagement has positive impacts on our social, physical and psychological wellbeing as well as helping us discover more about our own identities through the ways in which we interact with our own and others’ interpretations of art.

The potential of art to translate beyond reminiscence, to facilitate new social connections and to help people form links between personal histories and contemporary societal issues suggests that art and culture can also play an important role in empowering older people, helping them to feel more closely connected with contemporary society.

This article is a summary of research prepared for CultureCase, a resource from King’s College London to provide the sector with access to academic standard research. The summary of the academic paper is available on CultureCase.

Getting granny into Gormley