Recent research looked into the value young people in a deprived area of London place on education and participation in the arts. Catherine McNamara discusses the findings. 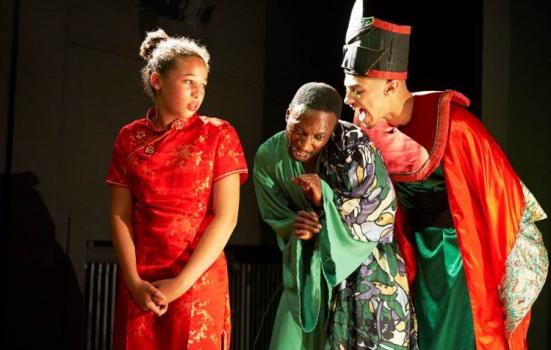 In 2014 Theatre Peckham and Royal Central School of Speech and Drama received funding from Creativeworks London to carry out research into young people’s engagement with drama, theatre and performance. I was the ‘academic partner’, or the lead researcher on the project, as I am involved at Royal Central in ensuring that students have a high-quality experience when they study with us, as well as developing routes into the school for young people from diverse backgrounds.

The research was a collaboration with Teresa Early, Artistic Director and Denise Keane, Head of Education and Training, both of Theatre Peckham. The theatre offers a broad range of training, education and progression routes to young people aged from three to 25. Many of the young people who attend are from social groups we would describe as under-represented in the creative and cultural sector. The 2015 Report by the Warwick Commission on the Future of Cultural Value Enriching Britain: Culture, Creativity and Growth tells us “children born into low income families with low levels of educational qualifications are the least likely to [:] be employed and succeed in the Cultural and Creative Industries”.

Our research was intended to be a critical step for Theatre Peckham in setting up a fit-for-purpose, two-year, post-16 performing arts course for those aspiring to enter into education and employment in the sector. We wanted to ask young people directly about the value they placed on education and participation in the arts – what was it worth to them and does it get them where they want to be?

The project included a review of pre-existing reports related to participation in the arts, the benefits of engagement with the arts for young people and cultural value of the arts more broadly, as well as qualitative interviews with young people from Theatre Peckham, two schools and a college in the London Borough of Southwark and London Bubble, another theatre organisation that provides education and training for young people. The young people were all aged between 14 and 21 years.

The key things about participation in drama, theatre and performance that were deemed to be of the most value were the following:

The participants talked about a number of barriers and obstacles that they faced as they were trying to navigate their way towards a career in this sector. They spoke about financial barriers, family and society’s views of drama and race, and class and background as a barrier to success. Most of the people interviewed had some financial concerns when it came to pursuing a career as a performer. 53% of respondents identified their socio-economic background as working class. Reasons for financial concerns were varied and more complex than the issue of student fees alone. There was a perception of extreme competition for jobs in the sector with long-term financial stability being a concern. A Charter School student said: “I think it’s money doubts, not during the process but afterwards because that’s when you’re left to find a job... It is hard, going for a career option to do with theatre.” A City of London Academy student suggested that any kind of course which was preparing people for higher education in this subject area should include “someone explaining the whole debt thing and the student loan and how it would affect me and how much I would be able to afford”. And a Theatre Peckham student said that they needed to know in full how the student loan system works and how university itself works. Evidently more can be done to increase students’ confidence around the financial logistics of student life and their financial capability in and beyond higher education.

There is a second set of suggestions for action related to the idea of increasing provision of high-quality courses and classes for the 16 to 18 age range. Participants felt that there are courses available for this age range within further education contexts, but one student from Charter School said: “I don’t think there are enough drama groups for people who are older… I don’t feel that there’s enough for young people my age, sixteen to eighteen. It’s usually up to fourteen, fifteen and then people kind of stop going. I don’t really feel like there are enough serious acting classes or companies which involve people aged 16 to 18 who are actually interested.”

As Theatre Peckham and Royal Central plan for the next stage in the research and development process, we are looking at new forms of investment in courses that will provide a bridge into education or employment in the cultural sector. We firmly support the idea that “diversity of creative talent and participation is essential to the expressive richness and the economic and social prosperity of the [Creative and Cultural Industries] ecosystem” (the Warwick Commission report). We intend to be instrumental in contributing to the diversification of the sector.