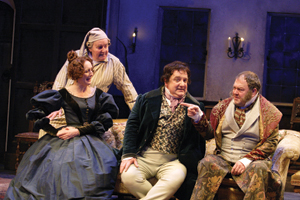 Seemingly, a paradox exists in the arts. Creativity and novelty lie at the heart of all artistic endeavour, yet arts and cultural organisations are frequently accused of not being innovative enough. Understanding this paradox is one of the reasons why NESTA embarked on a two-year research collaboration with the National Theatre and the Tate.
This work aimed to develop a conceptual framework for innovation to be used by arts and cultural organisations and funders alike. The National Theatre (NT) and the Tate, widely acknowledged as leading innovators in their respective artforms, were natural research partners. The scale of their operations allowed us to use quantitative experimental research techniques to test hypotheses that are of importance to the wider arts and cultural sector. A cross-cutting theme of our research was technological change. Both the National and the Tate are showing the arts and cultural sector how digital technologies can overcome traditional constraints imposed by physical location, thereby expanding audience reach. But they also open avenues for creating novel artistic experiences, hence developing the artform itself.

INVESTIGATING NT LIVE
At the NT, our investigations focused on the NT Live! screenings, which broadcast theatre productions live to cinema screens. The research combined both economic analysis of ticket sales and the use of audience experience surveys at both the theatre and cinema. We were able to establish the robustness of our findings by replicating them for two very different NT Live! screenings (‘Phèdre’ and ‘All’s Well That Ends Well’). The research allowed us to quantify the extent to which live broadcasts generated new audiences for theatre – our work showed that there were few theatre novices, but large numbers of lower-income individuals. We also tested whether the NT Live! screening ‘cannibalised’ audiences for traditional theatre, finding no evidence of this effect. These findings are of interest to all performing arts companies considering using new distribution technologies. Perhaps the most unexpected result for the NT was that cinema audiences felt more emotionally engaged with the production than traditional theatre audiences, leading us to coin the phrase ‘Beyond Live’ in one of our research publications.

TESTING THE TATE
With the Tate, we looked primarily at the website which accompanied the Colour Chart exhibition at Tate Liverpool last summer. We were able to quantify the extent to which galleries can draw in new audiences for contemporary art through their online operations, where we again see a pattern of few complete novices but significantly larger numbers of lower-income individuals compared with traditional gallery visitors. We also looked at the question of whether people were willing to pay for online content. Our survey suggested that 50% of online visitors were, in principle, prepared to make an online donation after visiting an online exhibition, much higher than the 20% who said they would be willing to pay for this access. However, when we put this to the test by installing a call for action on the Colour Chart webpages, we found that visitors did not respond. Understanding this disconnect between what online audiences say they are willing to do, and what they do in fact do, is a potentially important area for arts organisations to further research and experiment.
Whilst our research came up with a number of firm conclusions, it also opened up new questions. How transferable are our insights into emotional engagement to other digital media, such as live online streams or TV broadcasts? Would any of the research findings have differed if it had been a smaller regional theatre or gallery we had worked with, instead of the National Theatre and the Tate? Can digital experiences be adapted to draw in genuinely new audiences that have not previously engaged at the theatre or gallery?
WE NEED INNOVATION FUNDS
The only way to address these puzzles is more experimentation on the part of arts and cultural organisations. We hope to have demonstrated the benefits of this experimentation being research-led, featuring: up-front identification of clear propositions; the collection of data; the application of rigorous methodologies (quantitative as well as qualitative); and analysis of revealed (behavioural) as well as stated (surveyed) preferences.
Calling for experimentation in a climate of potentially devastating funding cuts might seem naïve. Experimentation is arguably a luxury when organisations are uncertain of future funding to pursue their ‘core’ missions. This is why our report calls for the arts councils to actively seek out opportunities to support experiments to the wider sector through dedicated research-led innovation funds. This would require new partnerships between arts and cultural organisations, arts funders and research councils. Targeted investment is also a cost-effective way that public funders can get ‘more for less’ in a tight funding environment, investing in the sector’s capacity to innovate through investing in open prototypes and trials.
Controlled experiments with new business models can help attract the private sector too. Funding research-led trials of interest to the wider sector is a possible new model of support by philanthropists (many of whom made their own money by taking calculated risks). Donors and sponsors wanting to make a contribution to the long-term future of the arts should seriously consider funding research that will help the sector better understand how it can thrive in the twenty-first century.

This week Hasan saw the exquisite Camille Silvy exhibition at the National Portrait Gallery and took his son to the RAF Museum in Hendon.