Cultural leaders have expressed dismay that Lord Kerslake’s inquiry into the UK’s economic imbalances did not make more specific references to the arts and culture. 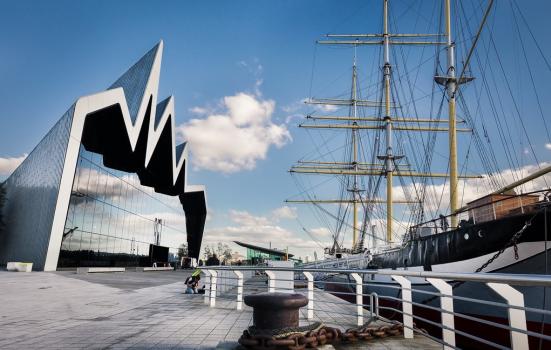 The Riverside Museum in Glasgow

An independent inquiry has called for the UK’s cultural and creative sectors to be geographically rebalanced, after identifying a “very strong London bias” in the provision of culture.

The report says the imbalance reflects the current distribution of institutions and facilities, including “the main location of BBC production and editorial control, the existing infrastructure of galleries, museums and orchestras (London has four) and related educational provision”.

But it adds that “there is a real opportunity to rebalance this as part of a wider spatial strategy, building on the examples of decentralisation and local success (e.g. in Salford and Glasgow) in the last few decades.”

The document notes that the “creative sector is likely to become an increasingly important part of our life and economy”. But cultural leaders have expressed dismay that it does not include more on the potential for arts and culture to contribute positively to the UK.

The first report from the UK2070 Commission also calls for a “national renewal fund” to tackle the widening economic gap between London and the South East and the rest of the country, describing the UK as “‘one of the most regionally unbalanced countries in the industrialised world”.

It states that as the UK’s richest region, London has a 50% higher level of productivity than any other nation or region in the country – and that if nothing is done to address the gap, over 50% of future growth will go to London and the south east.

The commission, which was set up in July 2018 and will continue until January 2020, says that at least £10bn per annum above and beyond existing spending is needed over 25 years to address the UK’s regional imbalances.

Lord Kerslake, the former head of the civil service and chair of the commission, said the UK was going “materially in the wrong direction”, and that despite Government initiatives “the economic disparities… have grown”.

In the report’s foreword, Kerslake writes that impact of the “acute and growing economic spatial disparities” in the UK are threefold:

“First, it means that we are not taking full advantage of the economic potential that all parts of the UK have to offer.

“Second, it creates an imbalance of wealth and opportunity that in turn creates division.

“Third, it creates enormous pressures in terms of population growth, housing affordability and an overloaded infrastructure in the economically high performing parts of the country (with big costs for both individuals and government).”

In addition to the renewal fund, the commission calls for much greater devolution of powers and funding, including the creation of four new regional economic development agencies in England for the North, the Midlands, the South East and South West.

It also proposes a “new northern hub for innovation and research” which it says “might be described as ‘MIT North’”. This would bring together researchers “at the cutting edge of thinking and technology, working within businesses and the universities”.

It adds that the UK needs to “build on what is already being achieved in the devolved nations” and “deliver a much greater level of devolution at local level to local government”.

Speaking to ArtsProfessional, Tony Butler, Executive Director at Derby Museums, said he would like to have seen much more in the report about the important role that culture can play in rebalancing the economy, and in particular its vital contribution to making a city or region a place that people want to live in.

He said that any plan needs to “reflect the range of contributions that arts and culture can make” and how it can help to “build great places with that sense of a shared identity, the convening space that arts and culture makes. This is slightly less measurable than return on investment, but it’s something that the country desperately needs.”

The UK2070 report, he continued, has a “fairly narrow” focus and mostly looks at “the economy and economic development rather than the broader social and environmental issues that we’re grappling with”.

He added: “There is a big challenge to the civic realm in our major cities outside London and that has been exacerbated by what I would see as outsourcing austerity to local government.”

Butler stressed that it was incumbent on museums and other cultural institutions “do their bit to contribute to sustainable growth” by such things as “helping develop a better cultural infrastructure to support the creative industries, to help with training and skills, to help with delivery of care through health and wellbeing initiatives”.

But he added that in the current funding environment, this was becoming increasingly difficult and was a situation that urgently needed to be addressed.

He said: “Where the challenge is, especially in the regions, is you can’t play your part without a baseline infrastructure, and what we’ve witnessed over the last five years or so is the real hollowing out of public investment for some of these major institutions outside London – and that has to stop.”

He added: “In the long term, it’s a good investment – it makes an economic and a social return.”

Dave Moutrey, Director and Chief Executive of the Manchester centre for visual art, film and theatre HOME, and Director of Culture for Manchester City Council, also felt that the report was lacking in concrete references to the importance of arts and culture.

While acknowledging the disparity between London and the rest of the UK, he cautioned against “over-simplifying things” in terms of a north-south divide when it comes to cultural funding.

He said: “The answer is a nuanced one. It’s not just that we’re all badly funded in the north – which we are – but then they’re also badly funded in, for example, Cornwall.

“Whilst I think there is a very strong argument for additional investment, I wouldn’t want to do that simply by robbing out London. You have to be careful about unintended consequences of doing those things – it’s not simply a matter of moving resources from one place to another.

“From an arts and culture point of view, London is a world capital – it is possibly one of the most important arts cities in the world. If we didn’t have that we may well want it. So the issue is about how London collaborates with regional partners in order to develop and move on.”

Citing the work done at HOME since it launched in 2015, he added: “We have some strong co-producing relationships with companies based in London who can attract world-class talent that we might find it difficult to attract in the regions. So it’s not just about money – it’s about how partnerships are developed.”

Moutrey said that the trend in the regions was “a gradual reduction in financial support, that comes out of a lack of political engagement and understanding at local authority level, as pressure has become greater on other services”.

But Manchester, he said, is one of the regional English cities that has bucked this trend.

“There are three reasons why Manchester invested in culture: economic impact; social impact; place making. And those three reasons are why we should be seeing culture in its broader sense represented in any economic strategy.”