London receives a third of all ACE funding

The capital continues to dominate Arts Council funding allocation, but distribution of the agency’s National Lottery Project Grants is in line with a target of 75% of Lottery revenue for regional areas. 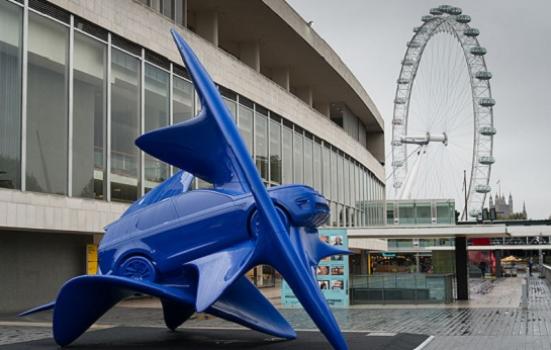 London continues to receive a disproportionate share of Arts Council England funding. Pictured is Unstoppable Spirit, a 2014 installation outside the Southbank Centre
Photo:

The £215m given to London organisations in 2018/19 is a much smaller proportion of total Arts Council England (ACE) funding than they received in 2012/13, when 82% went to the capital. But it is still almost 10 times more per capita than some other areas get.

An analysis of ACE funding data for 2018/19 by Local Partnership Enterprise (LEP) areas shows London received about £24 per person, compared to £8 per person for other areas.

The figures, calculated using 2018 population data, shed new light on the disparity between funding for London and other areas six years after an independent report called for action to fix the divide. The authors of Rebalancing our Cultural Capital warned that the “excessive dominance of London in national cultural life [is] unhealthy for the capital itself and for the nation”.

But with other ACE funding strands, the amount received by London remains disproportionately high. Its National Portfolio Organisations (NPOs) get the equivalent of £19.89 per capita, while those in the rest of England get about £6 for each person in their LEP.

Strategic funding, allocated for specific growth, diversity and engagement programmes, is also higher in London at £1.87 per person, compared to an average of 75p everywhere else.

The Rebalancing our Cultural Capital report suggested that the Arts Council’s “silence” on funding imbalances over the past 50 years was “perhaps…the result of its embarrassment at the scale of its own failure and that of government throughout this period to deliver – in practice – the promise of its policy rhetoric for the arts outside London”.

In its response to that report, ACE claimed it was “misleading” to look at per-person investment in London because organisations may be based there but tour or have a regional presence.

However, it acknowledged a need to better balance investment across the country, saying it would prefer to “strengthen capacity outside London rather than weakening investment in the capital”.

These LEPs also received the highest per capita allocations from ACE’s £488m pot of regular funding – which includes music education hubs and sector support organisations as well as NPOs.
Coventry and Warwickshire LEP had the biggest strategic investment per person – £6.27 – and West of England LEP received the most per head in project grants at about £3.46.

Grouping the LEPs by region reveals that outside of London, the North East receives the most funding, at roughly £11.56 per person, followed by the West Midlands (£10.81) and Yorkshire (£9.32).

The East Midlands, including the Greater Lincolnshire, South East Midlands and Derby, Derbyshire and Nottinghamshire LEPs, received the least: £5.01 per head.

The only area to receive more funding per person than London was Coventry and Warwickshire LEP, where the equivalent of £29 per person was spent.

This arose primarily from the high level of funding given to local NPO the Royal Shakespeare Company, rather than Coventry’s status as the UK City of Culture for 2021. Almost three quarters (72.5%) of the £27m invested there in 2018/19 was through regular funding.

ACE sought to emphasise the broader impact of that investment. A spokesperson said that “spend per head based – in this instance – on the postcode of an organisation is not going to be giving the full picture, as an organisation such as the Royal Shakespeare Company has a very wide audience reach way beyond its own area”.

The lowest overall level of investment was in the Buckinghamshire Thames Valley LEP, which received £2.13 per person.

Buckinghamshire County Council’s Cabinet Member for Community Engagement, Gareth Williams, said it was hoped a new cultural strategy for the area developed over the past two years would address this. A council spokesperson disclosed that a new independent body, the Buckinghamshire Cultural Partnership, is being formed to drive the strategy forward and ensure that culture “sits at the heart of agendas in economic development, growth, health and wellbeing”.

“By bringing the sector together in this way we will be better able to respond to new initiatives and funding call outs as they arise," Williams said.

The second lowest level of investment was in Worcestershire LEP (£2.53 per person), followed by Cheshire and Warrington (£3.07) and Hertfordshire (£3.13).

A spokesperson for Warrington Borough Council acknowledged the problem, saying: “We are aware of low ACE investment and we are taking steps to address this. We have strong cultural ambitions for Warrington.”

Following an unsuccessful City of Culture bid, Warrington’s cultural ambitions are now focused on its Contemporary Arts Festival, which is aiming to engage a more diverse audience than ever before this year.

The figure of "One third" of ACE funding going to London is incorrect. There are several NPO's across all bands who are actually London-based, but funded as regionally-based - mostly in the East/South-East region. Giving these companies a regional post-code massages the imbalance of London/regional funding. It militates against regional companies who request, but are refused, uplifts in funding. It blocks the growth and ambition of regional companies. It is also a falsification of the funding figures. Meanwhile, the London based "regional" companies new to the portfolio are usually funded at significantly higher amounts than their regional equivalents, boosting their growth and encouraging their ambition. There is an "official" ACE strategy and an "unofficial" ACE strategy. Once the two align, maybe we can have a more honest conversation about regional funding imbalance.
Well, well, the worms are slowly creeping out of ACE's woodwork.. In 2012/13 82 % of arts funding went to London, the seat of the national government. Presumably, in order to safeguard future funding for the arts those in power require excessive cultural support. Neat.