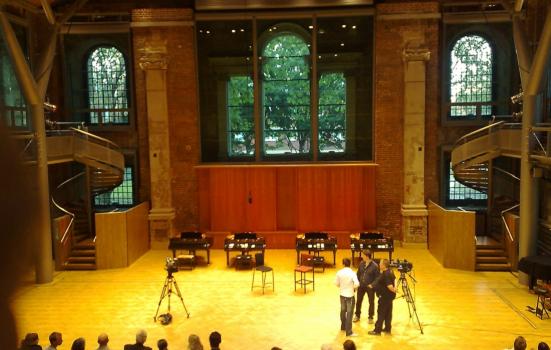 Pilots of socially-distanced indoor performances indicate that current guidelines to prevent the spread of coronavirus will work, according to the London Symphony Orchestra (LSO).

LSO has run five pilot concerts at its St Luke's chamber hall since July 17 as part of the Government's plan to reopen the cultural sector. A sixth event will take place on Friday, the day before indoor performance is officially allowed to resume.

DCMS has been working with LSO and other organisations including Manchester's Frog and Bucket comedy club, Butlin's holiday parks, London Palladium and The Clapham Grand on a total of 11 trial events.

Clapham Grand Venue Manager Ally Wolf and Frank Turner, the headline act for the test event, described it as a financial failure, but did not raise any safety concerns.

DCMS has commissioned a Bristol University and Imperial College London study into the risks of transmitting coronavirus via singing and orchestral music. At present, there is a lack of clear evidence on the safety of these activities, with concerns that droplets emitted while perfoming could spread the disease.

While DCMS belives the current guidelines are sufficient to ensure the sector's safety, the department did not answer ArtsProfessional's questions about what evidence it hopes to glean from the trials, or when it will be made available.

But an LSO spokesperson said its trials of socially distanced shows have shown promise. A track-and-trace ticketing system has not detected any cases of coronavirus passing through St Luke's and all LSO musicians and technicians have tested negative.

"All our audiences to date have filled in questionnaires after the concerts and have 100% said they felt safe, and the processes in place worked.

"We followed the guidelines issued and they have proved successful."

LSO's spokesperson said the pilots have allowed the orchestra to recovene and create new material that can be streamed online.

Current guidelines on indoor performance, including spacing singers and instrumentalists three metres apart, have been followed during the pilots.

The performances, which include the same set of musicians, have been limited to half an hour in length but run three times a day at 11am, 1pm and 3pm.

"You can get an audience in and out if it's half an hour long because there's no interval and we don't need to use the toilets, those kind of things," the spokesperson said.

Audiences have been limited to 30 people - many have been related to the players or LSO members - and people assemble at a distance outdoors before being allowed into the hall.

An increased number of stewards then direct audience members to their seats, which can be altered to arrange people according to their social bubbles.

The spokesperson said: "This is uncharted territory."

"The learning that we have through this, just from a practical point of view ... that's really what it's about.

"It's about everyone feeling confident and building up trust with our audiences and with musicians and our staff."

Information about the safety of orchestral performance is critical given the "conflicting views regarding the level of risk in different settings and gaps in the available evidence," according to ISM Chief Executive Deborah Annetts.

A recent literature review conducted by ISM says that studies have shown that potentially infectious aerosols are emitted when playing woodwind and brass instruments despite the minimal amount of air movement involved.

The review says there is strong scientific evidence that the risk of aerosol transmission "increase with vocal loudness".

The Government's guidelines say venues should ensure that patrons don't have to raise their voices because of the increased risk.

"This includes, but is not limited to, refraining from playing music ... if played at a volume that makes normal conversation difficult."

ISM said it accepted the sector must follow DCMS' guidance but that "it is the case that loud talking can and does happen in pub settings and yet they have been allowed to reopen in England".

"This discrepancy is difficult to understand."