Nearly 1,400 arts organisations “woke up to good news” as £257m of Culture Recovery Fund awards were announced, but those who missed out stand a slim chance of survival. 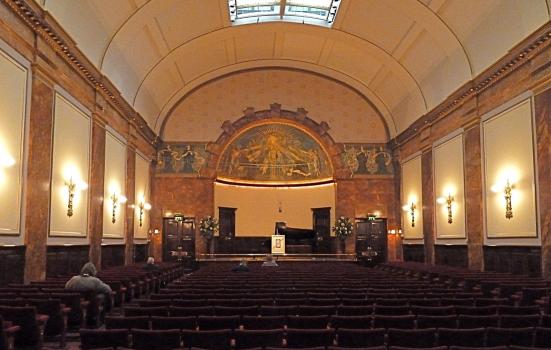 Wigmore Hall, pictured, reaped the highest reward from this round of CRF grants.
Photo:

Only two-thirds of applicants to the first round of England’s Culture Recovery Fund (CRF) have been awarded funding to see them through to March 2021.

Out of nearly 2,000 organisations, 578 were rejected as being either unviable or capable of surviving without financial support.

Beneficiaries of the CRF celebrated on Monday, breathing a collective sigh of relief that their pleas for assistance had been met with more certainty about their futures.

“This year has posed unprecedented challenges for Wiltshire Music Centre and for our colleagues across the sector. Support through the Culture Recovery Fund will help us to face these head on.

“It will help us to protect and create important employment opportunities within the sector and to ensure that we can continue to operate safely and effectively, in a Covid-secure way.”

But for those who missed out, the announcement is a blow they may not recover from. As per the CRF’s requirements, all applicants believed their organisation was at “imminent risk of failure and [had] exhausted all other options for increasing their resilience”.

“We are so thrilled for all the organisations that have been successful recipients … unfortunately we are not among them,” stage fighting coordinators Rc-Annie said.

“Whilst we continue to be concerned about our future, we are not going down without a fight!”

The CRF grants are the largest distribution of direct government funding to arts organisations in the UK since the Arts Council of Great Britain became the arm’s length distributor for the sector in 1946.

The £257m announced in this round is for applicants for up to £1m of funding. Arts Council England (ACE), which is administering the funding on behalf of the Government, received 1,963 applications for this funding round, but only 1,385 organisations were successful.

Almost a third of those awarded funding are based in London, and they will receive just over a third of the money. Theatre and music organisations share over half of the total.

Just two organisations, Manchester’s Mission Mars and the Wigmore Hall, will receive the maximum £1m grant from this this tranche of funding. 85% of recipients will get less than £250,000.

No details have been given to applicants yet on the timescale for grant payments, which will be critical for some. The funding announcement, initially due last week, was delayed amid projections that the sector can recover if a third of organisations are left to fail.

Few unsuccessful applicants have come forward to share their situations, but those who have expressed shock and disbelief.

Towersey Festival tweeted: “We failed in our attempt. Guess a 56 year old festival (the oldest independent in the country) that has never needed funding, hand outs or grants, always paid wages and bills and been financially viable every single year, is not worth saving.”

The Panto Bus asked ACE CEO Darren Henley to review its application, saying: “…tell us how providing many under privileged communities, venues and charities with access to live theatre when they can’t afford it otherwise does not ‘closely align’ with your requirements. We are worth saving!”

Despite comedy being deemed eligible for CRF funding, ACE told Manchester comedy club Frog and Bucket was not ‘culturally significant’: “There wasn't enough money to fund everyone and we had to prioritise those in most financial need.”

Successful applicants now have until March to develop business models that ensure their financial sustainability.

None of the funding can be used to cover costs after March 31 and with tougher lockdown measures being introduced in many parts of the country – especially the north of England – the grants may represent a stay of execution rather than a saving grace.

CRF applicants were permitted to budget for up to three months of reserves beyond March, giving them little to fall back on if restrictions persist.

Many of the grantees will use their funding to pursue digital and socially distanced programmes, according to materials released by DCMS.

Some, such as Watershed in Bristol, are already investing in fundraising activity. CEO Clare Reddington said they will be “refining and fine tuning our business model”.

At Riverside Studios, Tony Lankester, said the venue’s mission is to make the arts accessible to “often forgotten and marginalised communities”, but using its theatre spaces for corporate events and television productions over the past few months, has been a “lifeline”.

Culture Secretary Oliver Dowden heralded the funding announcement as “a vital boost for the theatres, music venues, museums and cultural organisations that form the soul of our nation”.

“This unprecedented investment in the arts is proof this government is here for culture, with further support to come in the days and weeks ahead so that the culture sector can bounce back strongly.”

Twitter has been alive with effusive statements of gratitude from arts organisations across the country – because publicly welcoming the funding was a condition of receiving it.

Recipients were instructed “to welcome this funding on your social media accounts (using #HereforCulture), on your website (using the ‘Here for Culture’ logo) and in your newsletters”.

“In receiving this funding, you are agreeing to acknowledge this funding publicly by crediting the Government’s Culture Recovery Fund. This is a challenging time for the cultural sector and the ‘Here for Culture’ campaign aims to build a positive movement uniting the members of the public and people across the sector to voice their support for culture.

“Alongside this we require you to alert your local media outlets of the news,” a message to grantees said.

Organisations were also encourged to use quotes from Dowden and ACE Chair Nicholas Serota supplied by ACE in their public communications.

While organisations have complied with the edicts – ArtsProfessional received many press releases thanking ACE and DCMS for their support – some have taken the opportunity to warn of the challenges ahead.

Yvonne Arnaud Theatre Director Joanna Read said the venue was “relieved and heartened” to receive £248,000 to help it plan for 2021 and beyond.

“We have opened for a few one-night performances to give our audiences and local partners some live entertainment during this difficult time. However, this is not a viable long-term solution.

“We expect to stay socially distanced through to April 2021.  Until social distancing is lifted and insurance cover is in place in the event of lockdown, it will not be possible to mount the larger scale productions which are our hall mark.”

Amid relief that many organisations’ short-term futures are secured, parts of the sector remain unconvinced the CRF will provide the level of protection needed.

Dowden said the funding will “protect these special places, save jobs and help the culture sector’s recovery”. Tracy Brabin, Shadow Minister for the Cultural Industries, warned it was “a sticking plaster over a gaping wound”.

“409,000 (1 in 5) creative jobs expected to be lost - more than 9x entire workforce of British Airways or 3x the workforce of Asda in the UK,” Brabin tweeted.

The Theatres Trust said: “We had hoped that November would bring good news about when theatres might reopen fully, but with the Prime Minister’s announcement of a three-tier lockdown system that now looks unlikely.

“There is still a real danger of more redundancies and ultimately losing theatres that add so much to their local areas, to people’s sense of place and to town centre economies”.

Millions more in CRF funding is set to be announced over the coming weeks.

£2.25m has already been allocated to provide immediate emergency support for grassroots music venues, leaving a further £245m for a second round grants of up to £1m and larger grants of up to £3m.

A £55m Capital Kickstart fund and £270m of Repayable Finance for long-term loans of over £3m are also due to be announced soon, though no dates have been given.

ACE said the scale of the economic crisis presented by the coronavirus means it cannot help everyone.

“We know that some organisations will be disappointed with the outcome but the majority of applicants to this round were successful – nearly 1400 organisations woke up to good news today.”

A spokesperson said DCMS imposed “strict criteria” on the CRF and, with demand much higher than the funding available, organisations in “immediate financial need” were prioritised.

“In many cases, unsuccessful applicants were not able to demonstrate they were at risk of no longer trading viably this year.”

None of the rejected applicants for the awarded funding rounds are eligible to benefit from these other funds. They are also unable to appeal the decision.

They may instead be able to access private funding, such as that offered by Garfield Weston Foundation.

ere two NPO sector support organisation - Arts Marketing Association and The Audience Agency - AMA received £235,643 NPO funding this year plus £46,784 in the first NPO Covid recovery funding and £183,880 in the most rcentr round. - a total of £466,307. The Audience Agency received NPO funding of £750,000 this yeas and £324,000 ninths recent CRF round - a toast of £1,074,000. what is the rationale behind this when many creative companies and individuals especially freelancers receive nothing? What are they doing for this money - have staff been furloughed or made redundant? This represents £1,540.307 to two agencies in one year>