Venues face a choice between offering lower capacity events or losing up to a third of their audiences, surveys suggest. 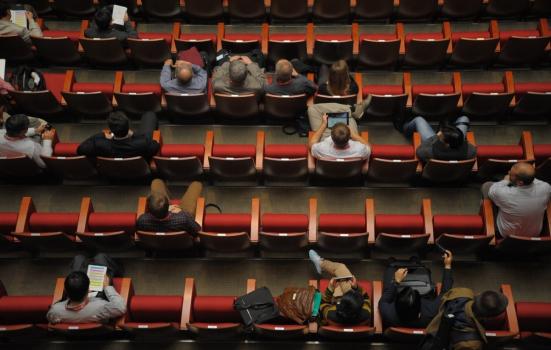 About a third of those who haven't yet returned to venues aren't planning to any time soon, according to the Insights Alliance of Indigo, Baker Richards and One Further.

Covid precautions may not be enough to reassure this group who, despite having been well engaged pre-Covid, are now also avoiding holidays, indoor dining and public transport at a higher rate than audiences who have returned.

However, nearly half of returnees expect to attend cultural events less often.

"I think that the stark reality is beginning to appear that even people who have been willing to return to cultural organisations are saying they will attend less frequently," Indigo Founder Katy Raines said.

"There's a group of people there who, until the [Covid-19] conditions change, just won't come.

"My concern is for organisations that have traditionally relied on a very frequent and loyal audience - in many cases it is that older demographic - their business models aren't going to stack up anymore."

It's affecting Christmas pantomime bookings: one third of panto-goers are "waiting to see what happens with Covid" before booking this year, the organisations' survey found.

"If they have some quieter performances, we would recommend proactively managing their inventory to allow social distancing in at least part of the house," she said.

"It will then be crucial to make sure hesitant previous bookers know there are these new seats available."

Baker Richards' CEO Robin Cantrill-Fenwick echoed this, saying socially distanced seating options and other precautions "will be vital for building confidence in those previously frequent segments who have not yet returned".

The Insights Alliance found 71% of non-returners and 57% of returners were more likely to visit venues that enforce social distancing and limit capacity to maintain distance between parties.

That's compared to 67% of non-returners who found testing and vaccine passports reassuring.

"Well, we asked that... and in terms of atmosphere there was no difference.

"If there are significant numbers of people who won't feel safe going back without social distancing, your choice is to do that or them not coming."

The survey showed "a big grey area" of about two thirds of people who might attend a mask-only, vaccine passported venue "if they thought the production was worth taking the risk for", she added.

Cantrill-Fenwick said many venues feel unable to enforce mask wearing and certification when in fact most audiences would either appreciate those measures, or be happy to comply with them.

"Indeed those who have not yet returned are particularly anxious about the idea of returning to a venue for the first time with no additional measures in place."

In Purple Seven and MHM's research, 86% of respondents expected to wear a mask and only 8% were put off by this.

However, only half expected to wear it during the performance - an issue for 43% of lost attendees in the Insights Alliance survey who said only requiring masks when people are out of their seats would make them less likely to return.

Sales have greatly improved since last year, with revenue less than 10% below 2019 levels, according to Purple Seven.

Managing Director David Brownlee said the reluctance among so many loyal bookers "both concerning and a cause for hope".

"If Covid is kept under control and we can send the right messages about safety to our hesitant customers, with pent up demand, this could become a Christmas to remember for the performing arts in the UK."

The Insights Alliance found two thirds of those who have returned have done so more than once, further confirming an increased appetite among some audiences.

Those who are engaging again were also more likely to have consumed online content during lockdown, though interest is likely to wane.

There is an opportunity to think about reopening more strategically about digital and outdoor formats, Raines said.

"I think it needs to be looked at a little more holistically that 'do we space seats out or not?'

"We have to think about engaging audiences and that can't be drawing more people to what we were doing before."