Where are the next Stormzys and Adeles?

Urban music is an economic success story, but music education is not serving the young creators of this work, many of whom come from diverse and working-class backgrounds, warns Pamela McCormick. 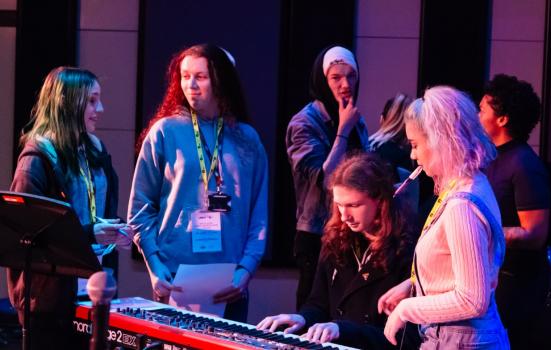 Grime has now emerged from the underground scene to take pride of place as one of this country’s biggest cultural and economic success stories. According to Ticketmaster’s report, published last October, 2017 was a breakthrough year.

Reaching an increasingly diverse audience, one that transcends cultural boundaries, there is no better example of cultural democracy. In addition to recognising the intrinsic talent and creativity emerging from the grassroots grime scene, the music has engaged a generation of young people on a social, cultural and even political level (the #Grime4Corbyn campaign played its part in the last general election).

This landmark year for British urban music prompted me to consider what further intervention is required to help more young people from diverse and working-class backgrounds progress to careers in music and the creative industries. We have come a long way, but there is much to do if we want to ensure that our sector is not the preserve of the privileged few.

I founded Urban Development in 2000 to develop talent in the urban pop genre among inner-city youth, operating in some of the country’s poorest and most diverse boroughs. We act as a label, publisher and production house as well as an educator and mentor, and use public and private funding to consolidate a commitment to growing British urban music.

Our charitable arm, the Urban Development Music Foundation, offers a programme of education, accredited training, and employment and business support to enable underserved and underprivileged pools of music talent to progress to higher education, employment in the music industry and careers as artists.

Our core purpose is to feed the British urban music scene, including grime, from grassroots level, to add commercial value. We have developed and sustained relationships with industry partners to provide a pipeline for new talent to make sustainable careers. Notable examples include musician Labrinth and rapper Little Simz.

We have attracted young musicians from black and minority ethnic (BAME) families and a wide range of backgrounds. Typical participants are 70% BAME, compared to the 36% BAME profile of London’s Centre for Young Musicians, or approximately 20% for the National Youth Orchestra.

Through research and evaluations we have uncovered some startling truths in relation to music education:

School funding is not rising in line with inflation. The National Audit Office estimates an 8% cut in real terms to school budgets by 2019/20. There are widespread predictions that this will result in students having less subject choice at GCSE, including music, because schools can no longer afford to run small classes. Extra-curricular activities that have enriched children’s learning, including music provision, are also likely to be reduced due to increased teacher workload.

My aim is to champion and promote the need for a greater cultural democracy – the artform development of diverse cultural forms emerging from youth culture at grassroots level. Hip-hop culture, from which urban music has evolved, was 25 years old in 1999 and it is high time it was recognised as an artform in the music education system.

We have set out a vision to establish a centre of excellence for urban music, the first of its kind in this country. To establish an accessible, structured and sustainable talent development pathway in popular and urban music to mirror that of the existing predominantly Western classical music approach. We want to continue with this plan, scale up the project model and roll it out nationally.

Significant progress has been made in building support and investment, but more needs to be done to ensure more young people have access to a system that is populated by well-trained and experienced educators. What we now need from government, the arts sector and creative industries is a compelling vision to support the social mobility for these young people from our communities. It starts with adequate education funding.

The case for action is clear. We need to do more, with an even greater consensus of support to contribute to lasting change that will benefit our future talent – the Labrinths, Skeptas, Stormzys and Adeles of tomorrow. We cannot afford to fail them.

Pamela McCormick is Founder and Director of Urban Development.
www.urbandevelopment.co.uk

Where are the next Stormzys and Adeles?