What we’ve learned moving from London to Essex

Relocating Kinetika’s work in carnival, outdoor and participatory arts to rapidly-changing Thurrock has allowed the company to renew its purpose and increase its impact, says Ali Pretty. 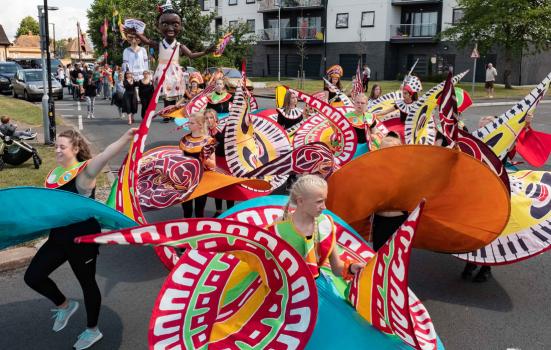 Reviewing one’s core business, its location and everything about it is a useful thing to do. Considering what your strengths are can take you somewhere new.

Kinetika, the company I founded in 1997, relocated from East London five years ago, moving further east to Thurrock in Essex. My values, and those reflected in Kinetika’s work, had remained essentially the same – to engage diverse communities through high-quality participatory arts projects that challenge people’s perceptions of the world around them. But we needed to review our practice and the community in which we chose to be based in order to achieve maximum impact.

We had a strong track record in carnival and outdoor arts. We brought with us a national network and international connections. We had some good commercial gigs under our belt. Crucially, the move gave us a new purpose-built design studio, so we’ve been able increase our capacity to attract more silk commissions and train a local team of artists to deliver them.

Now we are embedded in certain parts of Thurrock, having built up a strong community of local artists, volunteers, project managers and freelancers. We’ve brought employment to the area, and created an awareness about what culture can offer in communities that have previously had little or no cultural provision.

Not only have we established a strong local network, we’ve created a demand for our model throughout the region. When we travel to places like Norwich, we’re proud to be from Thurrock. Most people haven’t even heard of it. They’ve certainly had no reason to visit. It’s exciting to take what we do out and invite artists and audiences to come back with us.

It’s possible to make a difference through the arts, if you get really stuck in, working consistently at the grassroots. I’ve had to overcome my preconceptions about being here, in a place where a majority voted for Brexit and where people are different to me. It’s not London, and it struggles to acknowledge and celebrate diversity – but I love the challenge. The rewards of working in Thurrock are that you can feel the impact. Locals let you know when they value what you trying to do, and you’ll get kicked out just as quickly if they don’t.

What have been the challenges?

Moving to Thurrock offered us a beautiful studio (at the creative industries hub High House Production Park, in Purfleet) and a community that welcomed a new arts organisation coming to the area. But it was a risk – one that perhaps I didn’t fully appreciate at the time.

It was difficult attracting artists from even as close as London to come to work in Purfleet. So we’ve built our own Kinetika community, developing a core group of local artists and volunteers. Five years ago, we couldn’t have done three or four silk commissions in one season. So the move to create the Kinetika Design Studio is paying off.

We’re stable now, and it’s time to open up to wider networks again – to plug the work we’re doing locally into a national and international agenda around preparing communities to be ready for transition. We need to identify key cultural leaders who will commit to the area and mentor younger artists, supporting them to take over within the next decade. It’s an echo of what we did with Kinetika Bloco – the performance group we founded in 2007 that later became an independent charity.

What are the ‘must dos’ to keep an arts business growing and maintain artistic integrity and artistic production at the core?

As an artistic director of a small organisation, you’ve got to be a fast, open and lateral thinker, with a clear vision, core values and a business plan that aligns with these – while also being flexible enough to adapt to dynamic circumstances. While everyone seems to demand business growth, the value for me is in growing the team and the community around Kinetika. Training people to ensure high quality work is vital. The art is in matching ambition for the work with the resources you have. Be ambitious to attract the resources to deliver the ideas. And when there are resources than you want, make the tough calls on whether to scale down the ambition or not run a project at all.

To what extent does community development matter and feature in your work?

Local economic regeneration and community development are core for us. Thurrock is undergoing regeneration, and waves of new communities are arriving. Kinetika is a key player in a borough-wide team of artists, community leaders, council members and local businesses who are now pulling in one direction around the common goal of improving life for local people. The development of our annual T100 walking and making festival – now in its fifth year – and the regeneration of the Tilbury Carnival this summer are just a couple of the many things that are developing in the wider context of the Thames Estuary. They’re important steps in the right direction.

Just as important as our economic contribution is encouraging people to grapple with the big questions facing our society. In 2016 we had Brexit and this year there’s been rising awareness of the climate emergency facing us. Both have made us sit up and ask “Well, who are we and where are going?” Are we looking after our communities? No, we’re not. Do we have a vision? No, we don’t. We need to listen to George Monbiot, who says “we need a new story”, and heed Greta Thunberg’s call that “no one is too small to make a difference”. Artists have a responsibility to enable new conversations to happen, and help communities feel confident to imagine a different kind of future. Kinetika’s reinvention in Thurrock is helping achieve that goal.

Ali Pretty is Co-Founder and Artistic Director of Kinetika.
www.kinetikaonline.co.uk