Looking for role models who are fleet of foot, democratic, and full of creative flair? Look no further than the Golden Age Pirates, says Sarah Shead. 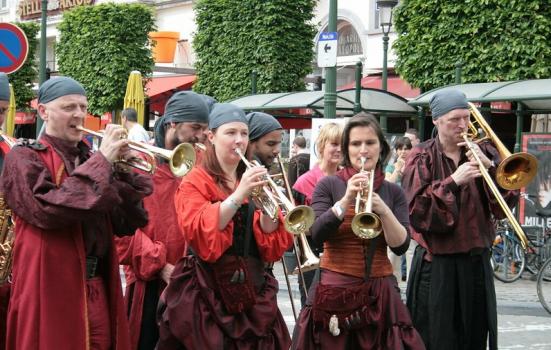 Golden Age Pirates were a highly skilled, well-coordinated network of diverse collaborators who were such innovative thinkers that they could outmanoeuvre and out-strategise the greatest minds and leaders of their time. According to Sam Conniff, serial social entrepreneur and author of Be More Pirate, they were fleet of foot, transparent, democratic, had their eye on a global market and created a brand that was known the world over.

The pirates were rebelling against unfair and challenging social and political times, similar to those we are experiencing in the arts today. So in a world where the role of art in society is a concern and the work of freelance creative practitioners and cultural workers is increasingly fragile, perhaps it’s time to start thinking a little more pirate.

It’s no secret that the arts sector places a great burden on freelancers and relies heavily on them to make significant and unsustainable personal and financial sacrifices. Arts Council England (ACE) acknowledges this in its new ten year strategy, saying: “Many creative practitioners and cultural workers, especially those from lower socioeconomic backgrounds, D/deaf or disabled people, and those from Black and minority ethnic backgrounds, continue to struggle to develop and sustain financially viable careers.”

To stop this diverse community leaving and taking their talents elsewhere, the first thing we must do is acknowledge that it isn’t just financial viability that we are striving for. In fact, during my years as an independent producer for Spin Arts, some of my most successful financial times were also the times I could have easily sailed out of the sector and never returned.

Like the pirates, freelancers not only want greater financial opportunities, we also want to work in an environment that feels fairer for all and where greater emphasis is placed on shared-care over self-care. We want our talents and services to be valued and compensated; to have an equal shot at opportunities; to have the power to affect change; to have equitable relationships; and to thrive because those around us are more inclusive and less averse to risk.

Unless we address the current injustices for freelance creative practitioners and cultural workers, the country’s cultural output will fail to reach its full potential and the massive underrepresentation of diverse voices in the arts will continue. How can we expect more people to value the arts, express their creativity, and engage in the widest possible range of culture, if we aren’t looking after our crew?

Drop the ‘us vs them’ narrative

Institutions are trying to find their own ways to work more equitably with freelancers and investors are starting to recognise the disparity between their investment in buildings and people. But to get to the root of the problem, we need to put aside the ‘us vs them’ narratives that separate organisations from individual creative practitioners and find a way to argue for change with one voice.

With ACE’s new strategy just launched, it’s a good time for independents, institutions and investors to cooperate, unite, form strategic alliances and lobby together for change at the highest political level, and then start implementing those changes before our ship hits the rocks.

What needs to change?

It’s not the time to divide and conquer, nor to grip tightly to the share of treasure you already have. It’s time to unite, to form a coalition and to lobby. If it sounds urgent, it’s because it is. What we need is:

●    Independent creatives to join forces, voice their needs louder, organise themselves better as a group, find independent-led solutions to sector problems and use collective power to make a stronger case for support and investment.
●    Institutions and organisations to unite by our sides. Where they can, they should do more to support and develop the independent workforce and consider their duty of care to freelancers.
●    Sector bodies and umbrella organisations to use their weight to advocate for better appreciation for the independent workforce. They should encourage smaller organisations to consider their responsibility for supporting and developing freelancers.
●    Investors and funders to direct more financial support to independents, ensuring it leads to better conditions and reflects the value of freelancers that make up our sector.

Together we can challenge the status quo, rewrite the rules and recreate the systems we often feel strangled by and forced to work within. Together we can organise ourselves more effectively to create change for the betterment of the arts and ultimately for the benefit of our society.

Sarah Shead is Director and Creative Producer of Spin Arts, and Captain of ‘Artistic Mutiny’, a group of people working in the arts who want to ‘be more pirate’ and fight for a fairer arts for all.
www.spin-arts.com
sarah@spin-arts.com

Institutions, organisations, independents, stakeholders and investors are invited to join Artistic Mutiny on its mission – Be More Pirate.