To truly increase diversity, the arts sector needs to take collective responsibility for equality. How? Jenny Williams and David Bryan make some suggestions. 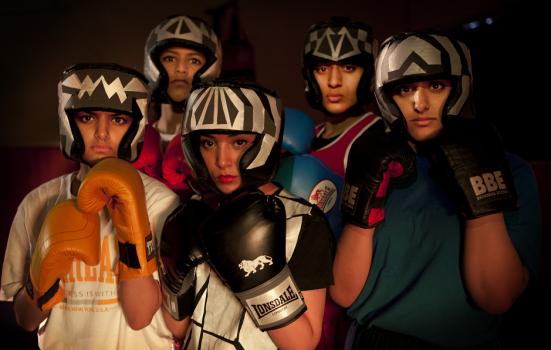 Common Wealth and Contact: No Guts, No Heart, No Glory, co-commissioned by Theatre in the Mill
Photo:

Arts Council England (ACE) has for years tried to encourage and appeal to those that it funds, as well as the wider arts sector, to fulfil the expectation that their practices and art should be free from cultural exclusion. But transformation in the cultural sector is a long-term process that can only be achieved through a determined and shared resolve to attain fairness. As a result, it has been hard to detect much progress. Over the years the sector has made invisible the stories of generations of makers, we have negated huge swathes of our communities, we have silenced the increasingly complex dialogue around ‘difference’ and diversity, and we have chosen to create a cultural exclusivity that determines who gets to create, how much and when.

The debate about diversity, if there ever was one, moved from ‘doing the right thing’ because it is morally and ethically correct, to the business case. These would both have been credible approaches, particularly if the thinking of the time had gone beyond the sound bite, but it didn’t. The moral case simply became a patronising expression of benevolence, placing those without resource in a passive child−adult relationship; and the business case became a self-interested position where money was to be gained from those previously neglected. In both cases the approaches only partially worked: audiences turned up for a moment and then not; practitioners were used and then not nurtured; trust was destroyed and relationships diminished.

And now we are in the era of the Creative Case – creativity being the binding force that brings us together. In December last year Sir Peter Bazalgette embedded this approach by making a bold commitment to raise the expectations of those organisations that ACE funds. Now, all ACE strategic funds must address diversity, and in addition, £8.5m of new diversity funds are being made available to support the Creative Case. In this period of austerity these funds are an indication that ACE is determined to leave a legacy that stops the decay, the indifference, the invisibility.

This determination to generate a national community of exemplar arts organisations committed to the principle of fairness and equality is timely and welcome. In an exceptional speech, Sir Peter stated that ACE “would no longer let progress with this crucial issue be abandoned to a small group of specialist organisations, that had for years been brilliant champions of the cause – but in terms of effecting lasting change to the arts establishment were themselves, by definition, on the outside, looking in”. For us to make real progress, he said, diversity must become a part of all the work we all do. It must “go mainstream”.

Historically, most of this work has been led by smaller organisations without significant capacity, and who most importantly, are not seeking to dazzle with big, one-off events but to develop modest, significant and repetitive actions for change. Alongside this there have been projects and ground-breaking ideas: single pieces of work that would, apparently, reverse the effect of generations. At times this has adversely affected the equality agenda: while everyone is busy delivering one-off projects, or waiting for the guidelines on ‘how to diversify’, little gets done and even less gets invested in for the long term. It is meaningful relationships, not symbolic gestures, that are important, and these take nurturing and investment. So the reality of bringing about change remains a challenge.

Hopefully all those organisations that have been doing good work will be recognised for their expertise, their knowledge and commitment to change. For all those organisations that have been doing little, it’s time to think before making an application. History tells us that all too often resources meant for black and minority ethnic (BAME) communities are seized by those that can write great funding bids. Had all these previous bids led to sustainable work and relationships, then our sector would look very different by now, but all too often the work has been short term and opportunistic.

Past investment in BAME organisations has all too often been at the level of ‘hand-to-mouth’ project funding with little possibility of significant additional or long-term support. Many have been resilient and created work regardless and relentlessly, but over the years the number of people willing to carry on in the face of cultural disregard and inadequate resources means that in some regions the talent is vanishing from the cultural sector.

So now, surely, we would all support modest bids that lead to legacy and outcomes. Perhaps the best commitment some organisations can make is to leave this resource for those with exemplary track records in this area. Perhaps instead, organisations with a journey to travel could make a commitment to BAME communities out of pre-existing funds to create a more sustainable and fair infrastructure in their spheres of influence. Why not use the opportunity to reach out and offer the services of your fundraisers, marketers or administrators to work with non-NPOs that specialise in this work? Why not offer cash or in-kind support? Or offer to share your spaces? In other words, build trust through genuine engagement as opposed to opportunism.

Sir Peter’s speech detailed the losses and the gains to be had from delivering on the Creative Case. It was a considered appeal for greater engagement and a speech that for many gave some hope that the erosion of investment, directly and indirectly, was about to turn. There is a renewed trust in the system that this might be the moment when some of our most experienced, talented artists and creative leaders, who have been excluded for so long, can secure respect, recognition or at least the warmth of cold hard cash (to quote novelist Marlon James).

As we move forwards, let’s start referring to the Creative Case for Diversity, not as the Arts Council’s agenda, but our own – one that we revise, refine and make a reality. Let’s be responsible and make equality our collective sector responsibility. Let’s build mutually beneficial relationships where partners can see gains that are not determined by imperial benevolence. Let’s invest not in the moment but in our collective future. Let’s build relationships built on trust.

We need to place the public, the communities and the audiences at the heart of why we do this. And the urgency is now. The current diet of artistic and cultural offering that we are collectively providing is not representative, and in this we contribute to inequality, displacement and isolation in our society. By the end of this year, we need to see the leadership of arts organisations genuinely exploring what can be done, having at times difficult conversations as a precursor to meaningful engagement and new solutions. There must be a radical improvement in the spectrum of artists whose work is commissioned and more inclusive employment. But most fundamental of all is that we re-calibrate who we are for and how better to reflect everyone. Are we in the cultural sector ready to lead culture for all of the UK? This surely should be our new quality and excellence framework.

Jenny Williams is Founder of Take the Space consultants and David Bryan is Director of Xtend Consultants and a member of Arts Council England’s national council.
www.takethespace.com
www.xtend.co.uk