What do audiences for Shakespeare look like today? As theatres prepare to mark the 400th anniversary of the bard’s death, The Audience Agency reveals some valuable insights. 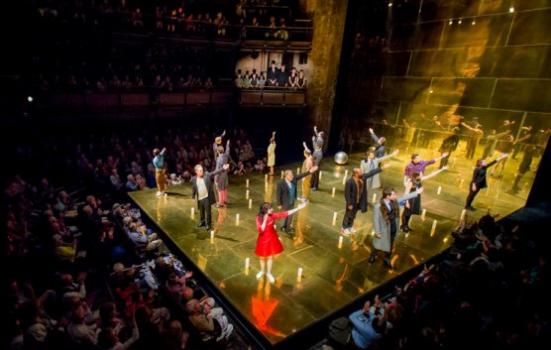 At The Audience Agency we have already collected data on well over 3,000 performances of Shakespeare in Audience Finder, a combined audience of nearly 750,000 people. In many respects, these audiences resemble general arts audiences, but there are a few notable differences for ‘Shakespeare-goers’.

There is no such thing as a tragedy-lover; rather the world is merely separated into Shakespeare-lovers and Shakespeare-neutrals

Surprisingly, Shakespeare audiences turn up to arts events less often than general arts attenders (on average some 1.4 times per year whereas the average is 2.3). They tend to be less spontaneous, only 12% booking on the day compared to an average of 20%. They also tend to have very little artform crossover, with only small percentages of those going to Shakespeare performances booking for other things like dance or literature.

What this means is that the audience for Shakespeare is generally more affluent. This is fairly typical of performing arts audiences, except that Shakespeare performances seem to attract people who are less likely to travel very far, live in rural settings, and less of the younger, metropolitan crowd. So, if you’re ever wondering “wherefore art thou, oh Shakespeare audiences?” you’ll probably find them in a quiet, prosperous part of the country.

Although the profiles of Shakespeare audiences look a little different to the audiences generally seen through Audience Finder, other behaviours (group size, average spend, day of the week purchased) don’t tend to exhibit an overall ‘Shakespeare effect’. 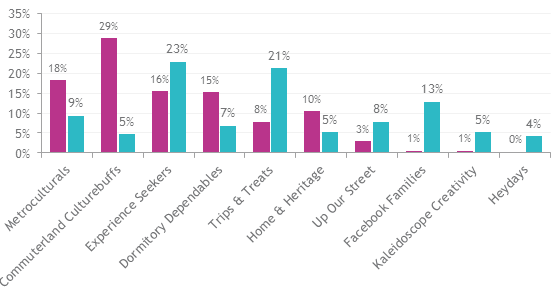 The audience is over-supplied with people in the Commuterland Culturebuffs, Dormitory Dependables and Metrocultural segments. These over-representations are a common feature of all performing arts audiences, but are especially common for Shakespeare audiences.

What are we to make of these near-exact-same profiles for the three plays? It may be that the vast majority of people see no distinction between one Shakespeare play and another. There is no such thing as a tragedy-lover; rather the world is merely separated into Shakespeare-lovers and Shakespeare-neutrals.

Another theory is that the audiences we see in these profiles aren’t anything to do with Shakespeare at all. In fact, we might expect to see exactly the same profile for performances of Ayckbourn or Ibsen at the same theatre. The loyalty of the audience may not be to a playwright or an actor, but rather to a venue or the traditional genre. It might be that this type of audience sees the classic and established playwrights as the best. Hamlet or Hobson’s Choice, it doesn’t matter. Traditional audiences want the traditional experience.

What this could mean for venues is that if you have a traditional theatre-going audience segment in your catchment area and you are asking them to take a chance on something that isn’t from an established or traditional playwright, you’ll need to link the title with something that gives it a stamp of the establishment, to appeal to their affection for tradition and what they know.

Conversely, if you have a younger, more metropolitan crowd, you can appeal to their sense of newness and celebrity. Even if you haven’t got Benedict Cumberbatch, what else is going to catch the eye? Instead of selling Macbeth as ‘glorious staging, timeless classic, great director’, you could start with something like ‘Macbeth unfurls its bloody banner this autumn over Anytown Theatre’. Sell it like a blockbuster event, not a stage play.

So, what about the question of couples flocking to Romeo and Juliet and singletons going to see Hamlet?

Audience Finder tells us that the average party size for Romeo and Juliet is 3.2 and 2.6 for Hamlet. (It is worth noting that this finding includes information from every booking, including large groups and as Shakespeare is often on the curriculum, school bookings could be skewing the data.)

Audience Finder shows us that Shakespeare audiences generally mirror the wider population of arts audiences save for a few differences: they go less frequently, tend to be more affluent and more traditional in their tastes, and are less likely to dip their toes into other artforms.

Shakespeare’s contemporary, Ben Jonson, said that Shakespeare was “not of an age, but for all time”. Audience Finder shows us that he was right, and that 400 years after his death, Shakespeare’s audiences aren’t all that different from other arts audiences, demonstrating that his work still has a wide appeal and is truly timeless.