The pandemic didn’t stop Music in the Round running the Sheffield Chamber Music Festival online – and learning from the experience. Jo Towler shares the outcomes, and the lessons for the future. 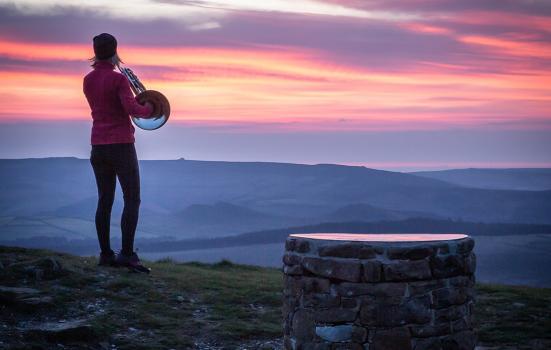 In these times of lockdown and very little live music, Music in the Round was one of many organisations that chose to move its activity online. The first Sheffield Chamber Music Festival (SCMF) held by Music in the Round was in May 1984, and this year was the first time it had been cancelled. But we didn’t want to let our many Friends and supporters down, so we decided to create an online version of the Festival on 15 and 16 May, which would have been the last two days of the festival.

Working with the 11 musicians of our resident group, Ensemble 360, and guest artists who would have been appearing live at the Festival, we created and promoted the 19 events of ‘SCMF at home’ over just six weeks. The Festival was presented on our YouTube channel, using YouTube Premiere to release a video on the hour throughout both days. Content ranged from an outdoor horn recital at daybreak in the Peak District and a Beethoven oboe trio in several rooms in Adrian Wilson’s house, to a conversation with pianist Paul Lewis about Beethoven and a Concerteenies event for children aged 0-5.

Free to watch online, we invited anyone watching to donate and to complete a survey so we could learn what was liked and what could be improved for the future.

There are many positives for us to take from this Festival. A month later it has had 33,000 views, of which 11,000 are unique. Considering we get around 1,000 bookers for the annual Festival, this means we reached 10,000 more people with our virtual version.

Not only did we smash our £5,000 fundraising target, but we were able to learn from our survey who was watching and why – and would they engage with us in the future.

It was especially pleasing to connect with those who wouldn’t normally be able to attend our concerts:

“Have visited Music in the Round since it started but am now disabled and cannot attend theatres. For me watching MITR on you tube was a gift from heaven.”

“Thank you for putting online. Normally I cannot afford to go to concerts so it was lovely to have the opportunity to hear these different musicians playing music, most of which I am unfamiliar with.”

“I am slightly hard of hearing, and was able to hear the question and answer sessions, which were so well conducted, clearly.”

“I really enjoyed it. The music was so beautiful and something I probably wouldn't have had access to if it wasn't streamed online.”

Respondents were asked about their motivation for watching, and a majority (81%) wanted to show support for Music in the Round, with 100% feeling that the experience had helped them feel more connected to us and the musicians. This attachment of audiences to ‘their’ arts organisation and the artists associated with it is so important, and something we should all aim to retain in the coming months as we try and persuade people back into venues in the future.

Being entertained rated highly, but 67% of people said they watched as the arts ‘are an important part of who I am’ and 47% said they watched to ‘lift my mood’. This shows the impact music can have on mental health and well-being, even when presented online, with inspiration, intellectual stimulation and feeling connected to the world beyond the home also important to respondents.

When asked if would they join us for an online concert again if they were unable or unwilling to attend a Music in the Round concert this autumn, 75% answered yes and 25% said it would depend on the programme. Again, this shows a positive response to virtual music-making.

What did we learn?

Some people found YouTube tricky to navigate, which we will try and make easier in the future. However, using YouTube Premiere meant that those watching could ‘chat’ to each other in the chatbox alongside the film, and many people commented afterwards that this led them to feel like they were sharing the music with others, bringing a vital ‘concert community’ feel to the experience that would normally be enjoyed at a live event. There was also a request for programme notes to be available, which will look to provide on our website in future.

SCMF at home was created almost from scratch. Of the 19 videos, 16 were created in just a few weeks in April, which meant it felt very much of its time with musicians playing in their own homes and conversations/discussions happening via Zoom. There was almost as much chat about the musicians’ front rooms as there was about the music! This set it apart from the archive footage that is available elsewhere, bringing a relevance and personal touch to the Festival that is keeping with our aim of bringing people closer to music. It also meant we could take advantage of it being virtual as opposed to anything that could be done live, such as selfie oboe trios and horn playing on top of a hill at sunrise.

We also think our fundraising efforts were successful as each of the musicians gently asked people to donate as part of their introductions to the music, and the link to the relevant website was in the text below each video so it could be done there and then online. Our £5,000 target? We raised over £17,000!

Jo Towler is Executive Director of Music in the Round
http://www.musicintheround.co.uk/

Learning through lockdown
Talking on tour