DCMS is calling for evidence for its latest inquiry on the levelling up agenda. Jason Jones-Hall has been analysing initial data from place-based funding streams and shares his findings. 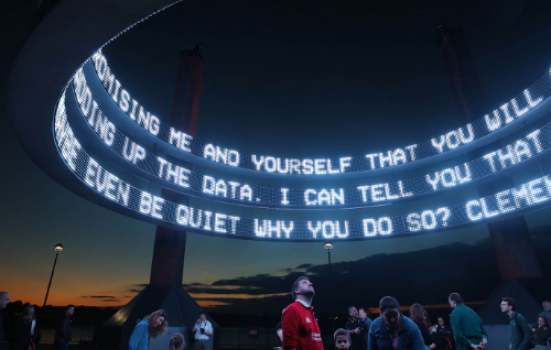 The connection between culture and regeneration is explicit in data obtained from the Department of Levelling Up, Housing and Communities, (DLUHC) identifying how successful bidders into the Levelling Up Fund, (LUF), categorised spend across the three fund priorities - regeneration, culture and transport.

Of the 105 successful projects across the UK, 54 included an element of cultural spend totalling £429m. Of these 54 LUF cultural bids, most reported a mixed funding model:

While the use of empty shops for pop-up projects can be effective, projects such as Creative Folkestone’s investment and ongoing support for the development of the town’s now well-established Creative Quarter shows what might be achievable with higher levels of investment and a longer term strategy.

Animating public spaces can be achieved through festivals, events, performances and public artworks. From what we know of how ministers have defined levelling up to date, there’s more to this than potential for economic regeneration or supporting the visitor economy. It’s also about civic pride and how this connects with - and springs from - identity of place.

Through Pioneering Places and the Cultural Development Fund (CDF) Network, we’ve seen lots of great examples of this, including the Folkestone Triennial, The Arches Worcester Festivals, Estuary Festival, Plymouth’s Mayflower400 programme and Grimsby’s Festival of the Sea.

Some of these have also acted as springboards for skills development and apprenticeship programmes - also key components of levelling up - while others have helped shape or change the narrative around the identity of a whole town or region, putting culture at its heart.

How can government support places without artistic infrastructure?

First things first: how do we identify such places?

The most obvious datasets for England are the Arts Council’s list of National Portfolio Organisations (NPOs) or Active Lives Survey, but local data is skewed as both datasets are based on local authority (district) level, not towns.  So how is this helpful if we’re talking about individual “left-behind” towns or cities associated with levelling up?

16 out of the 36 English local authorities - 44% - with successful LUF cultural bids have three or more NPOs. Does this mean funding is going where artistic infrastructure is already in place? Not necessarily.

Ramsgate, for example, is included in those 44% of successful LUF bids with three or more NPOs in the district, although all of these are in another town - not one of them in Ramsgate.

Similarly, the Active Lives Survey captures data for arts participation by district, so it doesn’t reflect how far people might have to travel or the vital role culture plays to a town’s identity and civic pride. All of which is relevant to the levelling up agenda.

Data only tells half the story... the rest is in how you tell it. Which takes us neatly onto...

Contributing to local decision-making and planning of place

The £4.8bn Levelling Up Fund, £220m Community Renewal Fund and the as-yet-undefined Shared Prosperity Fund - which replaces the EU Structural Funds - are administered through DLUHC. So local planning, empowering communities and working with local government are crucial considerations.

Creative and cultural projects can engage local communities in shaping the place where they live. Pioneering Places is a good example of this, while Creative Estuary is helping to support, develop and empower a creative community around the whole Thames Estuary area.

Local Plans typically last around 15-20 years and form the basis of every planning decision in your local authority. They also carry significant weight in the kind of investment plans that inform local authority funding bids - including LUF. If your Local Plan recognises or prioritises culture and creative industries, this can help in everything from supporting planning decisions for public artworks or creative workspaces to developing bids.

This becomes even more important with ever shorter windows for bid development, with only 15 weeks from the publication of the Levelling Up Fund prospectus to the first-round deadline.

Bottom line? If you don’t already have a strong focus on policy, advocacy and partnerships, now’s a good time to start. Arts Council England’s Cultural Compacts initiative is an interesting model.

Worth noting 6 of the 20 places supported through Cultural Compacts - (30%) - were amongst those successful cultural LUF bidders. This includes our CDF Network partners in Medway, (part of Creative Estuary), and Creative Wakefield, whose Cultural Compact encompasses five key aims: placemaking, visitor economy, wellbeing and inclusion, creative skills and creative spaces.

The Arts Council’s meta evaluation of its place-based programmes stresses both long-term funding and the importance of partnerships and collaboration amongst its primary recommendations. This is certainly our experience through our involvement with current and previous cultural placemaking initiatives including the Great Place Scheme and Cultural Development Fund, (CDF).

These involved both developing partnerships at local level and - crucially - meshing together networks between geographically dispersed towns and cities to share learning and best practice. Four sites formed a partnership through Pioneering Places under the joint largest of the Great Place Schemes, (Canterbury, Dover, Folkestone and Ramsgate), with the five pilot CDF round one projects coming together to form the CDF Network, (Creative Estuary, Grimsby, Plymouth, Wakefield and Worcester).

Case studies and learning from both of these initiatives are shared more widely through culturalplacemaking.com, and there are opportunities to hear more about how the CDF Network is addressing the levelling up agenda at Creative UK’s Creative Coalition Festival*.

Let us not forget that the pandemic has caused a major upheaval in the development and presentation of community based projects. Despite the relaxation of the rules, people are rightly careful. How will community based productions be best started and supported? Just for the record, I am commenting on 27 January 2022.

How might culture engineer levelling up?
The problem with competitive placemaking
Florence and the machine