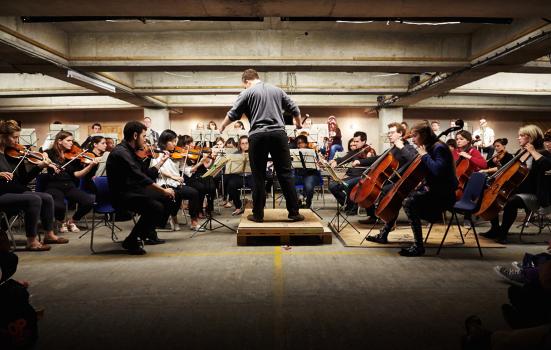 Young professional musicians who share a commitment to widening accessibility to classical music have formed the Multi-Story Orchestra, which performs in car parks around the country, attracting huge and diverse audiences.
Photo:

While we might expect educational institutions to be producing fresh ideas and challenging the wider sector, many conservatoires have seemingly decided that innovation in classical music has reached its end. The result is a classical music sector falling short of being relevant and students being deprived of a rounded education.

Many students leave conservatoires as fantastic musicians who are ill-prepared for life in the sector. Preparation for professional life extends beyond learning how to self-advertise and complete a tax-return. What about understanding the work going on behind the orchestra, or how musicians can work in community settings?

Conservatoires have an important role to play as part of the wider sector and this duty is being overlooked.

I must point out that the quality of the teaching I received during my time as a conservatoire student was unquestionable. Furthermore, non-academic facilities such as the careers centre and student support services were impeccable. So conservatoires clearly have the ability to address their shortcomings.

Out of respect, conservatoires should prioritise the work of living contributors when programming, allowing our ancestors to take more of a back seat in the classroom.

Living composers are busy creating new, exhilarating music and yet often find themselves side-lined in favour of those who worked hundreds of years ago. New audiences often relate more readily to modern music and rightly feel that music from the distant past is not intended for them to enjoy. What’s more, newer pieces can more feasibly be adapted for community projects. Terry Riley’s In C, with its adaptable improvisations, is a fantastic example.

There is a lot to learn from older music, but recordings and performances by dedicated orchestras provide enough of this repertoire. Even by the time a student has started at a conservatoire, they have played these styles of music plenty of times.

Contemporary music is vast. Think of what a student could learn from just one evening of performing a concert of Harrison Birtwistle’s fierce avant-gardism, Arvo Pärt’s stately repetitions, Kaija Saariaho’s mysterious romanticism and Julia Wolfe’s energetic bombardments. Then multiply that variation across four years of study.

The classic concert format is outdated. Long performances with strict etiquette and unwelcoming programme notes aren’t suited to modern audiences. Conservatoires are in the strongest position to experiment with new formats. Unlike concert halls or ensembles, they do not pay venue hire, rarely pay performers, and are not reliant on ticket sales to stay afloat. Other art forms, such as theatre, museums and the visual arts present work very differently now compared with the past. Music’s evolution is lagging.

Perhaps the greatest asset at the conservatoire’s disposal is its body of students. Both of my previous points could be addressed if music schools were to base their programming on fresh ideas from students. Most conservatoires offer a week during which students can put together their own performances. Why is this limited to one week?

Students are often told to park their ideas because the school’s programming for the year has already been decided and contracts signed. Contracts with whom, and more importantly, why? Conservatoires are not concert halls: they exist to research and to educate. There is much that the sector could learn from new types of performance, and equally so much a student could learn from putting it together. Offering them an understanding of the processes surrounding their performances would be a way for conservatoires to prepare students for non-performing roles in music.

This approach has been tried and tested elsewhere. In the US, for example, Columbia University proudly promotes Columbia Composers, a student-managed organisation that sits at the epicentre of Columbia’s musical life.

Conservatoires’ programmes triumphantly list their namesake orchestras and ensembles but neglect to showcase the performing students themselves. The same goes for composers who are often hidden among a flood of famous names from eighteenth century Germany. These institutions should be providing a platform for the creative talent of today. Instead they are exploiting student performers to sell their own name as a brand.

Conservatoires have gone some way towards opening their doors to diverse students, but their understanding of inclusion needs to be developed, including letting go of their secret scepticism and openly welcoming ideas from different backgrounds. Let’s stop worrying about diluting convention and understand how different cultures can coexist. Increasing the diversity of the conservatoire’s staff is crucial here: it becomes easier to produce diverse ideas and eliminate unconscious bias when staff are from different backgrounds.

Conservatoires need to stop ‘protecting’ their music-making from their community engagement programmes. Including community programmes is currently understood to be a concession borne out of a distrust that overlooks the benefits such integration could bring to both communities and students. Bring the school children in! Bring non-musicians in! Better, step outside and go to them! The role of educator should reach beyond the enrolled students. Let’s share the joy of music-making and research how participation in music-making can help people. And let students get involved in this too. Music can push artistic boundaries without being elitist.

In other sectors, universities are at the forefront of new knowledge and approaches, and art schools teach their students art history, but understand that they should be producing fresh ideas and know their role is to facilitate and promote this.

Classical music needs to escape the trap of tradition. It is time to question the role conservatoires should be playing beyond training instrumentalists and operating as substandard concert halls. It is time to stop looking inwards for solutions that were discovered elsewhere long ago.

Tom Foster is a freelance composer and founder of Unheard Concerts www.thomasfostermusic.com