How do local authorities and arts organisations work together to bid for a year-long festival? Liz Dart and Gavin Barlow share their experience. 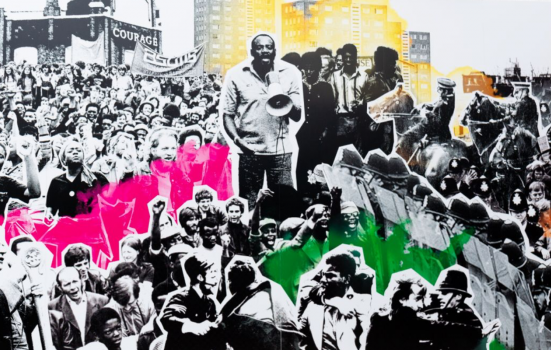 Back in January last year, when Lewisham won the competition to be the Mayor’s London Borough of Culture, it wasn’t just the culmination of several months’ work putting a bid together, it was the result of learning and working together over a number of years.

The Albany worked with Lewisham on the bid for London Borough of Culture when the initiative first launched in 2017, as well as on other strategic bids in previous years. In the past, there had been too much consideration of what might play well with funders or too much sway for external consultants to shape the offer. This was the first time that a bid felt authentically about the place and people of Lewisham.

In the summer of 2019, we sat in a stuffy basement office, trying to distil big ideas onto tiny post-it notes as part of an attempt to outline the qualities that define Lewisham. An initial provocation was spread far and wide for people to respond to. It was around the theme of home - what does Lewisham mean to you?

We held open engagement sessions and invited residents to respond with ideas. What came back was much more interesting than what had been originally put out. It led us to think about the borough’s history of activism and the idea of Lewisham as a place that stands up for things that are important.

With the breadth of people involved, putting the bid together felt like a real co-creation process, involving the Council, arts organisations, and local people. Like most successful co-creation processes, it took a lot of time investment. It sometimes felt messy and uncertain but keeping faith with it led to something much more distinctive, something that could only have come from Lewisham and truly reflected the spirit of the place.

Going from the bid to making the year a reality has been hugely challenging – not least thanks to restrictions and uncertainty brought on by the pandemic - but we are proud that we have remained true to that spirit. The context in which we’ll be delivering the year has changed but the themes are even more pertinent and relevant.

We’re about to announce a programme that is absolutely rooted in Lewisham and also outward looking; that is both joyful and a much-needed call to action around the core theme of Cultural Activism.

Building with partners, residents and communities

Lewisham’s year is about partnership working, it’s not about top-down decision making or about helicoptering in a programme. It’s about building with our partners, residents and communities. The Albany has been appointed as Lead Delivery Partner working with the Council and a range of other local partners to make this a reality. It is important that the aims and values of the bid and programme are reflected in how the year is run.

We are very conscious of the inequalities that exist across the borough. Some areas are cultural hotspots while others have few cultural venues in the traditional sense. From the beginning we’ve thought about how to include the full breadth and involve communities in all areas.

Lewisham is home to the Albany, the Horniman Museum, Trinity Laban and Goldsmiths University of London, but it’s important to us that the programme comes out into public spaces, popping up where people are - in our parks, markets and street corners.

The cultural sector can be part of solutions

It’s interesting to reflect on how the relationship between Lewisham Council and the Albany has changed over time, with the Albany moving from being a funded service to a genuine partner. This partnership approach began in earnest eight years ago, when the Council was in the difficult position of needing to reimagine adult day centres. We collaborated on a project called Meet Me at the Albany in partnership with older people, which showed how the cultural sector can be part of solutions.

With London Borough of Culture, we are working in a true partnership with a shared team and shared targets. It’s different from the usual contracting and commissioning relationship and has been one of the most exciting parts of the journey.

Seeing how the different people, experiences and perspectives have come together from each organisation and team member has been wonderful: everyone focused on something positive and joyful amid all the challenges.

The relationship of a local authority working in partnership with culture and local people is critical. And London Borough of Culture is a golden opportunity to demonstrate what culture can do.

Taking up space on other people’s agendas

For Lewisham’s year, it’s about culture being able to lead the conversation on issues from the climate emergency to social equity, amplifying voices of London’s diverse communities and inspiring local activism in its widest sense. Programmes such as Artists of Change, which will embed artists within Council teams, are part of an aim to rethink how things are done, ultimately asking how culture can be used to spark real change.

For the Albany, the process of putting the bid together and the journey since has highlighted the value of arts organisations being pro-active in their relationships with those in politics as well as powerful players in other sectors. For arts organisations, having enough confidence in the value and potential of what we do is often missing.

Having the courage to ask questions, pitch ideas, sit in on meetings or persist at navigating local authorities can be the key to getting answers or unlocking the partnerships needed. We must get better at taking up space on other people’s agendas and lobbying for our position as an essential asset in local areas, not just organisations in search of funds.

Setting out to question power structures and act as a catalyst for positive change within a local area, which can then inspire change elsewhere, is perhaps a tall order for a programme as relatively modest as London Borough of Culture. As people working in the arts though, we tend to believe in the power of stories, and it feels like this is a critical moment to not only tell unheard stories with the aim of making a difference, but to tell our own story as clearly and defiantly as possible.

Gavin Barlow is Artistic Director of the Albany and Creative Director of Lewisham’s year as London Borough of Culture.

Liz Dart is Director of Culture, Libraries and Learning at Lewisham Council.