How do artists engage with people living with dementia? Stephen Higgins, Electra Perivolaris and Nina Swann share their different perspectives on a new project. 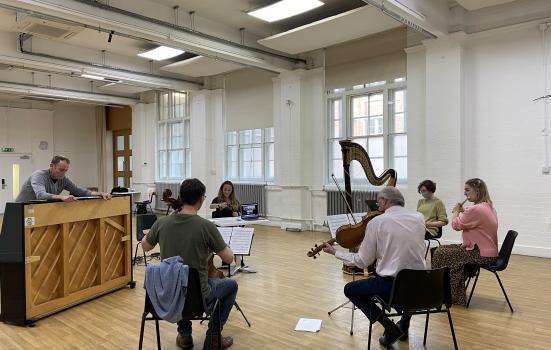 When I founded Theatre of Sound, with co-director Daisy Evans, one of the primary motives was to create a style of storytelling through music of all genres in a new and sometimes unexpected way. The two projects which will officially launch the company are Bartók’s Bluebeard’s Castle and a new commission, Judith’s Castle.

Theatre of Sound aims to integrate work of the highest professional level, performed by some of the world’s leading singers and musicians. We want it to be accessible to all in unexpected and evocative buildings not normally associated with theatre performances; and with engagement projects involving communities who might not normally feel that opera and theatre is for them.

Bartók’s opera is a true psychodrama; its gothic horror story of abuse and imprisonment is well known. Our production will transform the ‘usual’ interpretation into a love story of a long and happily married couple coming to terms with that most contemporary of horror stories: living with dementia. Locked castle doors become locked-in memories in Bluebeard’s wife Judith’s mind.

The new commission, Judith’s Castle, grew from our research into the transformative effect of music on those living with dementia and has resulted in a wonderful partnership between the orchestra for the opera, the London Sinfonietta, and Live Music Now, a charity with long experience of working in this field.

The composer, the singers and musicians from both the Sinfonietta and Live Music Now have spent precious, creative time with families recently diagnosed with dementia – both the carers and the cared for. This process culminates in premieres of the new compositions, performed on the set of the opera production, with the participating families invited as guests of honour.

I became aware of the power of participatory arts at 16 when a choral piece I’d composed was selected for a BBC Young Composer workshop with the BBC Singers as part of the Proms. I had been attending these free workshops designed to introduce teenagers to composition since the age of 12, and I knew access to these inclusive sessions had been vital in my development. Later as an ambassador for the scheme, I began to work in creative music education - with organisations such as the Scottish Chamber Orchestra and the Scottish charity, musicALL - to increase access to composition.

A composer can play a significant role in the community and my own work on inclusive projects has shaped my compositional practice. As a composer, I seek to open up my creative process to others, using collaboration to create meaningful music which connects diverse publics. Such participatory work and composing in community settings enables my music to communicate with wide audiences.

In this way, we can transform classical and contemporary music from a genre seen to be elite, to a form which can welcome new audiences. As more people engage with the creation of contemporary music, the art form takes on new life and has greater relevance in the present day.  Having worked with Glyndebourne Opera on projects for people living with dementia, I witnessed the unique power vocal music has to engage those who are often excluded from the creative process.

Judith’s Castle evolved from my work with families living with dementia, an opera sharing their stories. It challenges the perception of opera as an elite form, instead working with the genre as an ideal form for connecting artists, artforms and diverse publics, and bringing communities together.

Live Music Now brings 40+ years’ experience of working creatively alongside people living with dementia to Judith’s Castle. We have developed a comprehensive training and support programme for our musician workforce, so they are able to use their musical talents to connect with people in a meaningful way. Our musicians see first-hand the power that music has to affect lasting positive change, and how participating in and creating music can empower people to live joyful and fulfilling musical lives.

For this project, we were pleased to be working with music in dementia expert Julian West (and Live Music Now alumnus) and who advised and provided context for the musicians and composer. He also introduced us to Rare Dementia Support and the UCL Dementia Research Centre, who helped us to recruit our participating couples and are providing much-needed logistical and emotional support.

So much of our activity usually happens behind closed doors, in care homes and other adult social care settings. Judith’s Castle offers us a welcome opportunity to showcase the possibilities of using music in this way and highlights the remarkable role professional musicians can play in society.

In hearing the new music created by Electra with the families, we want to challenge the scaremongering, negativity and pessimism that usually accompanies a dementia diagnosis, and instead show how much joy can still be found through music, creativity and a celebration of life.

Theatre of Sound’s Bluebeard’s Castle and Judith’s Castle will take place at Stone Nest in Soho, London from 4-14 November. Two relaxed, informal and free performances of Judith’s Castle will take place at 2pm on Saturday 6 and Saturday 13 November lasting approximately 45 minutes. For tickets visit theatreofsound. The performance will be filmed and available to watch free on the London Sinfonietta website.