Can the arts tackle digital exclusion?

New research highlights how cultural organisations could play a key role in demystifying the internet to non-users, writes Katie Moffat. 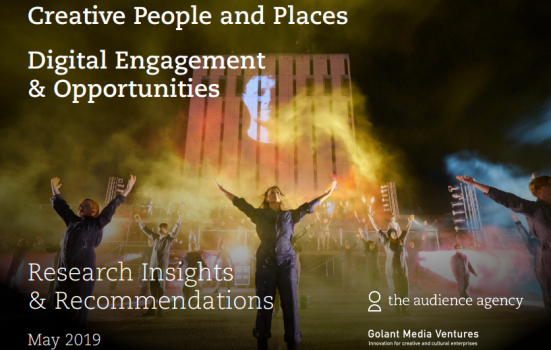 Digital platforms have long been seen as a way to grow and broaden audiences. Whether through live streaming, social media or YouTube, the internet offers up hundreds of thousands of individuals who are looking for distraction, entertainment and inspiration. By posting to social media accounts, live streaming to Facebook or uploading to YouTube, the theory is that the arts can earn a slice of that audience.

A related argument suggests that technologies like virtual reality (VR) and augmented reality offer opportunities to engage audiences with arts and culture in new and exciting ways – and may also help engage people who have traditionally felt excluded.

It can become an ideal environment in which to demystify digital

There is some truth to both these theories, but they oversimplify human behaviour online – including how and why we choose what to watch, read or interact with. They also fail to recognise the impact of digital exclusion issues and how for some audience groups, simply creating something and putting it out into the world is not a route to engagement.

Some good news, however, emerges from recent research from The Audience Agency into how Creative People and Places (CPP) programmes are using digital. This suggests that arts organisations could be in a strong position to help tackle digital exclusion, and in doing so, broaden their audience reach. But specific conditions and ways of working are required to make this happen.

The Creative People and Places (CPP) programme has the explicit aim of enabling people in areas of low cultural engagement and infrastructure to take the lead in choosing, creating and taking part in art experiences where they live. As such, it offers a new model for the co-creation of a more democratic, locally-determined culture.

Our research has found that digital exclusion is a typical issue in the communities that CPPs work with. This can relate to practical financial issues – such as not having access to a computer or smartphone, or not being able to afford broadband or data. But digital exclusion can also manifest itself in other ways. One of the largest groups of non-users of the internet is the so-called ‘not for me’ camp . This attitude may be due to people’s fear of using it, or a sense that it is not relevant to their lives. In a recent BBC podcast , Dr Josie Barnard explains: “People often say that getting online is just ‘not for me’, but this may well be an excuse to hide any shame or embarrassment about not being able to use a computer”.

The Government’s 2014 Digital Inclusion Strategy says that “digital exclusion affects some of the most vulnerable and disadvantaged groups in society”, including those in social housing, those on lower wages or the unemployed, those with disabilities and older people. In its 2019 report, ‘Exploring the UK’s Digital Divide’, the Office for National Statistics says: “In an increasingly digital age, those who are not engaging effectively with the digital world are at risk of being left behind… The number of adults who have either never used the internet or have not used it in the last three months, described as “internet non-users”, has been declining over recent years. Since 2011, this number has almost halved, but in 2018 there were still 5.3 million adults in the UK, or 10.0% of the adult UK population, in this situation”. Not being able to access the internet or having no confidence in your ability to interact with digital platforms can have significant consequences. It might shut off access to essential services, increase loneliness, or have a negative impact on self-confidence.

One of the ways ‘not for me’ digital exclusion can be tackled is by providing people with safe, non-threatening environments where they can learn about digital technologies. Because CPP programmes work in a collaborative, inclusive way, they naturally create welcoming conditions. So when they add digital tools and technologies into the mix, it can become an ideal environment in which to demystify digital.

One of the participants in HOME CPP, in Slough, was also involved in a company that produces VR experiences. As part of the CPP programme, they set up in a high street shop location in Slough and ran sessions to introduce people to VR. They also recorded a performance by the Royal Opera House, which they loaded onto VR headsets and took out to care homes in the local area, enabling older people who are physically unable to visit an arts venue to participate in the experience.

The approach of CPPs is shaped or driven by the communities they collaborate with. The benefit of this is that they rarely adopt a ‘digital for digital’s sake’ approach. But our research identified that where digital did not feature in CPP artistic programmes, this was usually due to a lack of digital experience among the facilitators. The challenge of describing, discussing and framing the possibilities of using digital technologies to a community who views them as ‘other’ to them raises significant issues. We concluded that CPPs should be given more support to understand the artistic or participatory possibilities of digital technologies, and the different ways of framing those possibilities with their communities. There needs to be more exposure to high quality digital participation, co-creation and engagement.

There are obvious implications for the wider arts sector, which is frequently encouraged to adopt the collaborative working practices exemplified by CPPs. If more arts organisations can become skilled at introducing digital technologies to digitally excluded groups, the impact could move beyond the cultural. It could lead to a positive social outcome that contributes to a reduction in digital exclusion within communities, increasing people’s confidence and empowerment.

An additional benefit may be helping those organisations reach a wider and broader audience – thus fulfilling that long held promise of the opportunities afforded by digital technologies.

Katie Moffat is Head of Digital at The Audience Agency.
theaudienceagency.org

2020 festivals: there’s no going back
Can the arts tackle digital exclusion?
How to…develop a meaningful digital strategy
Advertising with Facebook
Knowing your online audience