In the wake of the killing of George Floyd, many drama schools committed to reform their curricula. Oladipo Agboluaje shares a ground-breaking programme that has emerged as a result. 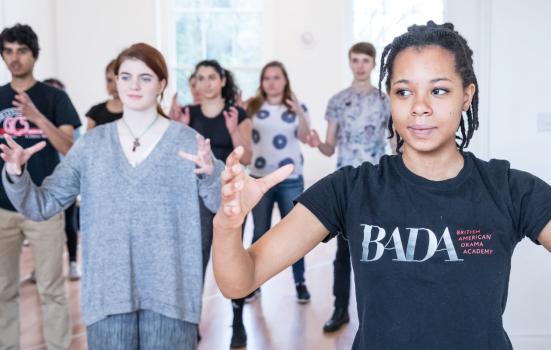 Last year, I was invited by the British American Drama Academy (BADA) to design a Black British Theatre programme. The aim is not only to explore theatre in this world-renowned city but also to investigate the diverse history that has made London what it is today.

Since 1984, BADA has offered more than 5,000 students the opportunity to study classical theatre with Britain’s leading actors, directors and academics. It counts among its alumni Tarell Alvin McCraney, Ruth Negga, Ngozi Anyanwu and the late Chadwick Boseman. BADA is now expanding its programme to reflect London’s contemporary theatre scene.

Over the past few years, plays such as Arinze Kene’s Misty, Inua Ellams’ Barber Shop Chronicles, and Winsome Pinnock’s Red Lights and Blue Rockets, have played in major venues to national acclaim. But this is not a recent trend.

Plays by Roy Williams, Kwame Kwei Armah and Juliet Gilkes Romero to mention only a few have been part of the recent national conversation about Black British history, culture and identity. We can go even further back to plays by Una Marson, CLR James, Barry Reckord, on to Mustapha Matura and Michael Abbensetts and Amani Naphtali.

Why is this programme necessary?

Too often our history suggests that the Black presence in the UK is a recent one, beginning with the Windrush Generation, when West Indians answered the call to help reconstruct the mother country after the devastation brought about by World War Two.

Other accounts imply the Black presence began with the advent of the transatlantic slave trade, despite the fact that historians have proved that Black people have been on these isles dating back to Roman times.

But our programme is not designed to simply counter the dominant narratives we see on stage. Rather, the course exposes students to the rich tapestry of storytelling and performance styles that have been generated by Black creatives, and have been brought to life by theatre companies, theatres, administrators, patrons and audiences.

How has Black experience been narrated?

The course is designed to give students a social, cultural and historical background in different aspects of Black British theatre and performance. It will look at the ways theatre practitioners have narrated the Black experience in Britain and analyse how these practitioners have responded to a changing Britain from a Black perspective. Crucially it will examine the different kinds of performance aesthetics that have developed from it.

Students can expect a mix of tutorials, curated visits to places of significance and masterclasses by leading theatre practitioners. And the masterclasses won’t just be from playwrights of the stature of Roy Williams.

Kwame Kwei-Armah, formerly artistic director of Maryland’s state theatre Baltimore Center Stage and currently running the Young Vic, will compare his experience of leading a venue in the USA and in the UK.  And Ola Animashawun, one of the UK’s most respected dramaturgs and famous for setting up the Royal Court’s Young Writers Programme, will also contribute.

While Black British theatre is a hybrid of practices from Africa, the Caribbean and America, at the same time it is uniquely British. Britain exported its notions of theatre to the colonies.

So, in a sense, multiculturalism and hybridity have swung back and forth between the old centre and the periphery. Black culture continues to influence British culture, on and off the stage.

One of the great things about studying at BADA is that London – the theatre capital of the world - is our classroom. BADA’s home in bustling Camden Town is just a bus ride away from the West End.

There are a wealth of shows to see and creatives to meet so the students can gain first-hand knowledge of what it is like to develop and stage a show here. And new writing, with its finger on the pulse, is a vital component of London’s theatre scene and our course. To experience it, we’ll be visiting major venues like the National Theatre, the Royal Court, Soho Theatre, the Kiln and the Bush - to mention only the tip of the iceberg.

Then there are visits that contextualise the plays we will be analysing, such as a theatre-focused Black History Walks. The Black Cultural Archives, located in Brixton and regarded as a spiritual home of Black people in London will also be on the agenda. In addition, the V&A’s Theatre and Performance collections are a treasure trove of artefacts and memorabilia, including the National Video Archive of Performance.

And we’ll visit the National Theatre Studio which houses the Black Plays Archive as well as a collection of video recordings of performances staged in its three venues, including some by our guest artists. And that’s not to mention a visit to Talawa Theatre, Britain’s oldest Black theatre company.

Essentially, students enrolling in the Black British Theatre programme at BADA can expect to study a dynamic subject through the eyes of a vast array of experienced practitioners who are the leading lights of their field. They will see Black British theatre in its rich variety on the page and on the stage.

Oladipo Agboluaje is a playwright and course director of Black British Theatre at BADA.

Starting in June, the Black British Theatre programme runs for four weeks and is open to everyone at any stage in their career. Application details are on our website.