What is it like to be an artist working in the East Midlands? Elizabeth Hawley-Lingham and Paula Serafini spent two years looking beneath the surface. 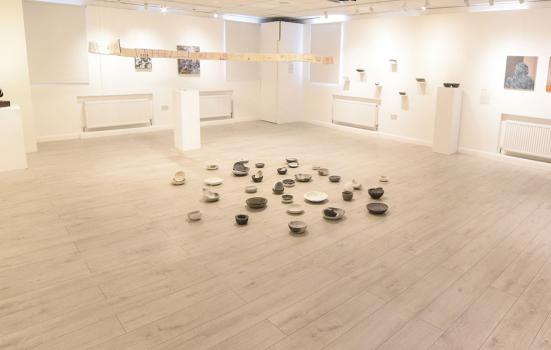 Document was a project produced by the Contemporary Visual Arts Network, East Midlands (CVAN EM) with the aim of shining a light on what it is like to be an artist working in the region from the artist’s point of view. For over two years we worked with six artists, capturing their thoughts and experiences through film, writing, photography and discussion.

Organisations that make themselves accessible to the widest group of artists, not just those proficient in writing applications, will diversify their field of applicants

As part of the project, we teamed up with the University of Leicester’s CAMEo Research Institute to research the working lives of the six artists. This involved in-depth interviews and a wider reflection on the nature of working in the arts in the region. Here are our main findings.

It is possible to be a successful artist outside London

The six artists are based in different parts of the region, are at different stages of their careers and have come to their practice by different routes. Their testimonies show that they are not looking at London as their main route to measure their success.

Artists have different patterns of work

The six artists all juggle different demands corresponding to different aspects of their practice, such as time for making, admin and research. This means there are different rhythms and tempos to an artist’s working life, which are often in tension with one another. Open-ended work, for instance, tends to be at odds with the increasingly project-oriented mentality of the sector.

Ideas of success are multiple and can change

While artists might start their careers with a certain idea of what success entails (such as a solo show or a prize), these ideas are not necessarily fixed. Some artists might abandon such goals, prioritising instead a feeling of contentment with their work. For others, simply being able to do artistic work and sustain their practice was the biggest achievement.

Career expectations are shaped by class, race and gender

Artists are structurally positioned in different ways, which conditions not only their opportunities for career progression, but also the way they think about their career. Artists with caring responsibilities or on low incomes might have more difficulty keeping up with the social and developmental aspects of their careers. Those from working-class backgrounds often do not plan as far in advance as their middle-class counterparts, as they don’t feel the same sense of stability, or feel they belong in quite the same way as those with a longer history of arts participation.

Inclusivity and diversity initiatives can be both enabling and constraining

Many arts organisations and funding bodies have initiatives for minority or socially disadvantaged artists that aim to address a lack of representation in the sector. These can be hugely helpful in providing opportunities for work and a greater professional recognition. However, artists can sometimes feel constricted by such initiatives, especially if there is an undue expectation to produce work that is strictly about diversity themes or if their own social identity is assumed to be the primary basis of their work.

Artists need to be cared for

Artists are in the main self-employed. They are usually responsible for managing all aspects of their creative practice as well as their business. As well as being author or creator, they are often also publicist, administrator and fundraiser. Many work in isolation, often for little money or sometimes for nothing at all – the opportunity to work considered a reward in itself. Given that issues of poor mental health and financial insecurity are widespread within the artist community, the sector must consider how it cares for artists and how to enable them to care for themselves.

There is value in the non-making part of artistic work

When documenting or talking about their work, artists placed importance on moments and aspects of their daily lives that sit outside the actual making, but are integral to their artistic process. These included walking, reading, travelling, seeing exhibitions and teaching. Most artists seemed to adopt a holistic approach to their practice, rather than a compartmentalised one.

Institutions need to be more transparent

Many processes involved in accessing opportunities – taking part in exhibitions, tendering for commissions, applying for funding – are complicated and sometimes opaque. Organisations that make themselves accessible to the widest group of artists, not just those familiar with them or proficient in writing applications, will diversify their field of applicants, and by extension their programmes and audience base.

There is a communal aspect to being an artist

The artists spoke enthusiastically about having opportunities to spend time with other artists in a social and professional context. They cited the importance of being involved in peer networks and critical dialogue to gain feedback on their work, learn about other artists’ practices, hear about opportunities, deal with rejection, and not be isolated.

Document presents an accessible and genuine portrait of the artist and helps demystify a world that can seem impenetrable and hard to navigate. We hope it will be useful for young people making career choices and those working with artists, as well as of interest to a general audience.

Elizabeth Hawley-Lingham is Director of the Contemporary Visual Arts Network in the East Midlands.
Paula Serafini is Research Associate at CAMEo Research Institute for Cultural and Media Economies, University of Leicester.
www.cvaneastmidlands.co.uk
www.le.ac.uk/cameo

CVAN is the representative body for the contemporary visual arts in England and a meta-network of nine regional visual arts support networks fostering an engaged, diverse, and vibrant visual arts culture.