Since the Russian invasion of Ukraine, a Kyiv theatre has become a bomb shelter for artists and locals. Its director Alex Borovenskiy has led the creative and humanitarian initiative using Facebook. 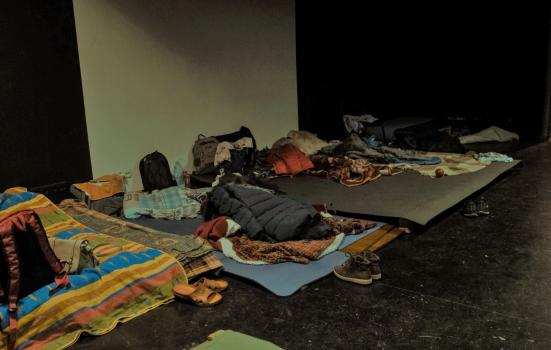 The ProEnglish Theatre of Ukraine is a small independent theatre in Kyiv. We are the only Ukrainian theatre producing exclusively in English. Before the Russian invasion on February 24, we had just opened Ibsen’s Hedda Gabler and were working on two new plays by Polish and Norwegian playwrights.

The war, and the new emergencies it created, put these plans on hold. For the past few weeks it has felt relatively safe in Kyiv; there are even days when there are no air raid sirens. But they are few. But February and March were very different. Russian troops were attacking Kyiv from several directions, trying to surround and conquer the capital. Air attacks and missile strikes were common.

Many civilians left Kyiv at that time; others were living in bomb shelters. As our theatre is in the basement of a 5-storey residential building, it was obvious what we had to do. We went there on the first day - Day 1 - and stayed throughout March.

At first it was just the company actors and directors who came - shocked, angry and scared. Within a few hours, many more people arrived – other artists, friends of friends, and animals whose owners had fled. By the end of the day, people from neighbouring buildings started coming over too. The first night we hosted some 40 people in the theatre, who slept in our rehearsal rooms and the performance space.

On Day 2 we recorded Tonight my Heartbeat is Uneven, a poem sent to us by an actress trapped in another bomb shelter in the suburbs of Kyiv. From then on, we became the ART Shelter creating art every evening during curfew hours, after our volunteering work around the city was done.

It was about then that I started working on a new production: Markus Zusak’s The Book Thief and its main character Liesel Meminger came to mind. It was so relevant - the story of a little girl in the little German town of Molching during the second world war, under constant bombardment. It felt like history was repeating itself, in reverse.

From a bomb shelter to the world

I adapted The Book Thief into a monologue, which was performed by Anabell Ramirez in March. From that performance, our production of The Book of Sirens emerged. It premiered in our ART Shelter, in the same premises where we slept and spent our days. We didn’t create a new staging or setting, we performed it around the 10 improvised beds in the shelter.

On the day of the premiere, the 10 occupants of those beds were our audience - together with about 10 thousand people from across the world. As we streamed it, theatres from many countries across the globe restreamed it. The whole world got to see.

But we issued a special warning before the show for Ukrainians: “In this performance we’re using Soviet radio announcements and the sound of sirens, both of which might be traumatic for a Ukrainian audience.”

A few days later we ran a discussion on Zoom entitled ‘Why Art Thou?’ with artists from around the world who had watched the play. The response was impressive. This ability to speak about the war from its epicentre in dramatic form, without making a documentary, made The Book of Sirens universally recognisable.

Anabell is now in Spain performing The Book of Sirens, and then we’re planning a tour to Germany. The story of Liesel Meminger learning to read in the bomb shelter in Molching in 1943 staged in a bomb shelter in Kyiv in 2022 needs to be seen by a German audience.

In the autumn, we are taking the show to New York to be experienced by an American audience. At the same time, back in Kyiv we are resuming work at our ProEnglish Drama School, which has been suspended since February.

Laughing in the face of war

We will start with a RAW series: Relief Artistic Workshops where our acting coaches will be working with anybody wanting to participate, exploring Augusto Boal techniques, playback theatre and Les Kurbas principles to address traumatic experiences of the war. These workshops are also important in helping our own theatre workers deal with their PTSD.

I will begin work on my first attempt at documentary theatre – a show with a working title of Thursday 5am. The performance will consist of verbatim statements by Ukrainians recalling their experience of the first day of the war. On 24 February at Thursday 5am is the moment the war started for most Ukrainians. The production will be a comedy. I want to learn to laugh in the face of war with our art.

Alex Borovenskiy as a theatre director and artistic director of the ProEnglish Theatre of Ukraine.
@ProenglishT