Regeneration is all very well – but it is only through celebrating its authentic working class culture that the city can discover a beating heart and soul, says Lisa Meyer. 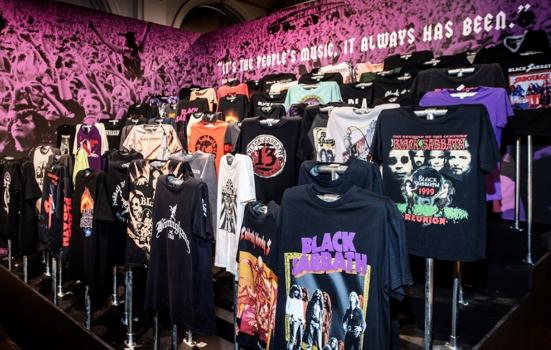 Cities like Liverpool and Manchester have embraced their music heritage in their cultural and tourism offers and as an authentic way of place making. This has resulted in confident and vibrant ecosystems that attract visitors and nurture homegrown talent.

Birmingham is also home to music loved the world over – but you wouldn’t know if you came to visit. My mission is to throw down the gauntlet to the city, the wider West Midlands region and the UK and ask: “Where are the shrines to Heavy Metal?”

The Home of Metal project celebrates the music that was born in Birmingham. Music that turned up the volume, down-tuned guitars, and introduced a whole new meaning to the word ‘heavy’. Exhibitions and events join the dots between music, social history, visual art and fan cultures to enable a new perspective – one that is celebratory, eschews notions of high or low art and joins audiences and performers together.

Heavy Metal is an intrinsic part of the cultural identity of Birmingham and the wider region. The music was originated by the group Black Sabbath in 1968. All the members grew up in Aston, a working class area where terraced houses were located within walking distance of the many foundries and factories. Bombsites left untouched since the Second World War dominated the local streets. Heavy sounds were an escape from the daily routine.

Black Sabbath and the bands from the Midlands they inspired have now created a global phenomenon. Vibrant Heavy Metal scenes around the world have developed their own interpretations of the sound. From the sonic intensity of extreme Metal in Nepal and the bravado of American Nu-Metal to the chaos of Black Metal in Scandinavia and dozens of global sub-genres in between, it all started in Birmingham.

The Home of Metal project was conceived in 2007 to explore how music that began in this region has had such a huge influence on music and wider contemporary culture. Following a major programme of events in 2011, an even larger Home of Metal season was held in summer last year. The blockbuster exhibition ‘Black Sabbath; 50 Years’ at Birmingham Museum & Art Gallery attracted audiences from over 52 countries, from every corner of the world.

But it isn’t simply about reliving history – Heavy Metal is contemporary, vibrant and as popular as it has ever been, with new generations of fans discovering Black Sabbath the world over and their pioneering sound continuing to inspire artists. Last year we programmed and co-curated exhibitions featuring new work by critically acclaimed contemporary artists at New Art Gallery Walsall, mac Birmingham, Eastside Projects and Centrala.

Our annual award-winning annual experimental music festival, Supersonic, is also inspired by the idea of ‘heaviness’. The festival was named the UK’s “best small festival” by the Guardian, which said: "By embracing the heaviness in Birmingham’s heritage, and adding a strong dose of eccentricity, Supersonic is world-class.”

The three-month season was an enormous success. Over 350,000 people attended events and we achieved widespread coverage in the national and international media. Headlines included ‘A Headbanging Tribute to the Beatles of Home of Metal’, ‘Birmingham learns to love its heavy metal legacy’, and ‘One Hell of a City; How Birmingham embraced its heavy metal history’.

Home of Metal has been the one of the region’s most successful cultural projects, in terms of both attracting international visitors and resonating with local audiences. The project now needs a permanent space that can use music heritage to catalyse a vibrant ecosystem around it. Birmingham’s growth over the last few years and planned expansion in coming years is unprecedented. It is now time for the city to develop and support a convincing cultural offer that inspires local people and entices visitors from all over the world. A generic offer will not create a memorable or meaningful destination. Birmingham needs to support a cultural project that contributes to placemaking and pride in Brummie culture.

Since Black Sabbath first began to play, the city has re-invented itself with post-modern architecture creating spaces for shopping and corporate business. What it is missing is the beating heart and soul that can only come from authentic cultural expression.

Lisa Meyer is Founder and Artistic Director of Capsule, which produces Home of Metal.
www.homeofmetal.com
@homeofmetaluk

Where the Sabb Four left them? On the streets the lads walked? Where they rehearsed? Sadly Birmingham City Council has sold one such relic. A two fingered salute to the the 2019 HoM season? The Birmingham Mail headlined the story "Our Heart Is Being Ripped Out". Pilgrims had been visiting Newtown Community Centre for sometime. No More …. https://www.birminghammail.co.uk/news/midlands-news/our-heart-being-ripped-out-15914165