Without help, without permission

A perpetual, community-led art project is transforming neighbourhoods in Exeter, street by street. JoJo Spinks explains why handing control of commissioning to local people has been crucial to its success. 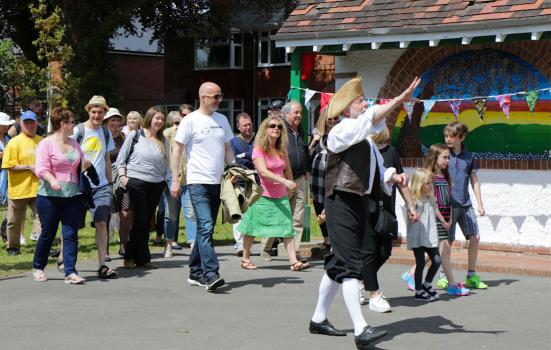 Exeter in Devon doesn’t feature on any deprivation index. There were no riots. Inter-cultural tensions are minimal. It didn’t appear on the list of places eligible to participate in the Creative People and Places scheme, not even in the second round. However, there are two factors that are changing the way that participatory, place-led art is happening in Exeter right now.

It is endlessly moving around inside one neighbourhood and is empowering, enriching and reconnecting

The first is what Francois Matarasso, in his latest book A Restless Art, calls working “without help, without permission”, in a participation revolution. The growth in areas like guerrilla gardening and community-run cafés and shops shows that people are actively seeking agency. It is happening most effectively at a hyper-local level, street by street. It is characterised by a real hunger for reconnection, to each other and to our places.

The second factor lies in Exeter’s distinctive landscape. There are few places in the city where you can’t see the green fields beyond. Even in the centre, a subliminal invitation to re-connect with a more natural world is constant. There’s also something in the undulating nature of the ground that encourages neighbourhoods to define themselves distinctively by valley or by ridge.

These factors, combined with early recognition and support from local authorities, has provided fertile ground for a groundswell participatory movement that has the potential to totally change the way community arts are conceived and commissioned.

It started in early 2015 when we at Interwoven Productions CIC, a small performance company, ventured out on to a suburban street to share with the residents what it might have looked like in the Bronze Age. Inspired by the view from the top of the street, across to a prehistoric monument on the horizon, an interactive walking tour was devised.

The primary goal was always reconnection with place. Neighbours meeting neighbours to share in an event that allowed them to mindfully consider their own place, seeing it in new ways. An important secondary goal was to test the theory that a community would commission and fund its own art. And that was the game-changer.

In what might seem to be a counterintuitive move, it was decided from the outset that all performances, activities and events would be offered free of charge. Participant audiences were then encouraged to make nominations for which street or feature in their neighbourhood they would like to celebrate next. As part of that discussion, they would be asked for a ‘pay-it-forward’ donation to allow the next project to happen.

Four years on and that gift is still flowing, around and around inside one square kilometre of landscape – a ‘squilometre’. In this way people can see for themselves exactly where their contribution has gone. Endlessly moving around inside one neighbourhood, this process is empowering, enriching, and reconnects people.

Certain things became clear. First, it wasn’t enough to allow the art to be place-led – it had to be community-commissioned too. This meant forming a temporary ‘pod’, a steering group of local residents for each nominated project. The pod makes the creative decisions. In the last four years, squilometre pods have created exhibitions, street performances, community star-gazing, intergenerational tea-parties, lined their streets with flags and have won an RHS Outstanding Award for community planting. It is always their choice and their definition of art. If they need the input of a professional artist, they commission one.

Second, pay-it-forward donations alone aren’t enough to pay professional artists as well as cover other project costs. So we work with each pod to help them to become more effective in their fundraising.

Third, all squilometres need a special volunteer who is already part of that community, someone who can form a new pod for each new project in that neighbourhood. Someone who has skills in landscape and heritage interpretation and connections to the art world. An 'animateur' would be the most accurate description of the role, and it’s very telling that we don’t have an English word for that kind of community-based facilitator.

With our first squilometre in Heavitree, we have proved that a community can its own art. A squilometre runs in community perpetual motion. Once up and running, it’s a self-financing organism.

The successful transfer of the technique to a new square kilometre depends upon identifying a new volunteer animateur in that place. There has been a great deal of discussion about whether the post of animateur should be funded, but there is such strength in the participatory model that it is felt that it should continue to be voluntary. External funding is almost always short term, and as it takes time to build ‘trust bonds’ and relationships, pulling the plug at the end of a round of funding can be very damaging.

And there are better ways to support these ‘super-participants’. We are developing a programme of support, mentoring and training for squilometre animateurs so that they can be brought into the participatory fold and benefit from being part of a network. We also provide induction, training and support for participatory practitioners who want to work in this way and make themselves available for community commissioning.

Without help, without permission, the game has changed.

Without help, without permission